Where to Watch Late-Season Bat Emergences Around Texas - DFWChild 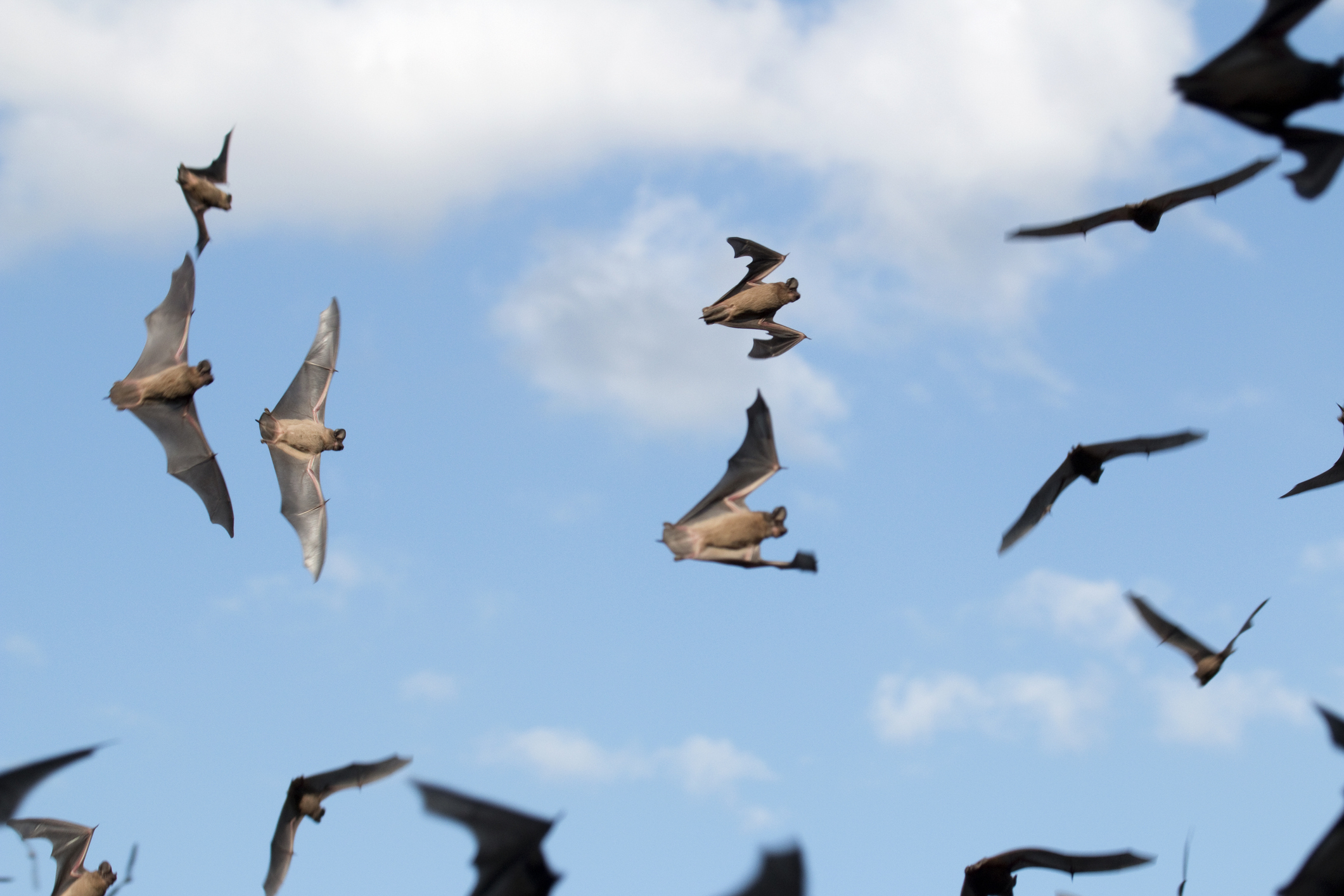 Bats—they’re nocturnal, hang upside down, and may or may not also be vampires. It’s no wonder they’ve become synonymous with Halloween. And as that spooky holiday nears, we’re reminded about the very real creatures that inspire so much fear and awe. Experts say they’re highly misunderstood creatures that fulfill an important part of our ecosystems by eating moths and other bugs and pollinating plants. (Yep, move over butterflies, bats are pollinators, too!)

They emerge at dusk for nightly hunting and form black swirling clouds or, I’ll use my husband’s term here, bat-nado. They’re magical to witness—they being Mexican free-tail bats (Tadarida brasiliensis) whose densest concentrations can be found here in Texas thanks to large maternity colonies roosting in caves, abandoned mines and under bridges.

Thankfully, it’s not too late to see them in-person again before they all migrate south for winter. They can be seen through late October and mid-November until that first cold front hits. Note that reservations are sold-out for tours through the world’s largest bat colony at Bracken Cave, located on private property outside San Antonio (book early for next year at batcon.org), but you can catch the tail end of bat season at these popular destinations around Texas.

Our state’s capital city is also home to the country’s largest urban bat colony. Interestingly, when the Congress Avenue Bridge, which stretches over Lady Bird Lake near downtown, was renovated in 1980, the 16-inch-deep expansion joints underneath inadvertently doubled as an ideal bat shelter. Fast forward 40 years and now roughly 1.5 million bats roost under the bridge each summer. 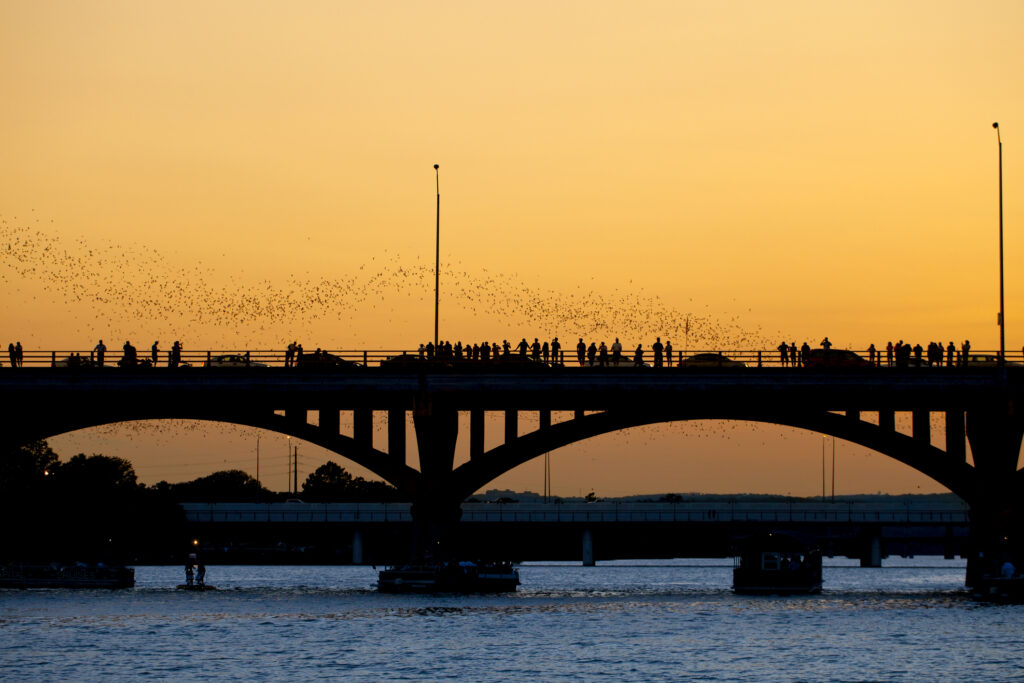 The city welcomes onlookers to view the bats from the pedestrian portion of the bridge above or, more safely away from traffic, from the lawn underneath at Austin American-Statesman’s Bat Observation area at 305 South Congress Avenue. That’s on the opposite side of the road as the Nightwing, the famed bat statue by Dale Whistler and a great spot for a photo op. (You’ll find many more bat symbols around the city, which adopted the bat as its official animal emblem in 2010.)

Bat watching is a huge tourist attraction for Austin, so be sure to arrive well before sunset to secure the best viewing spot on the lawn. Blankets and chairs are welcome too. Though for a more adventurous outing and a better vantage point, get out onto the water by renting a kayak or joining a boat cruise. Several companies offer sunset boat and kayak tours and water sports equipment for evening rentals. Austin Bat Refuge has an exhaustive list at austinbatrefuge.org.

A couple notable ones include Lone Star Riverboat for its nightly bat-watching tours through early November. Reservations are $13 adults; $8 children; under 3 free. Live Love Paddle offers bat-watching kayaking tours on Thursdays through Sundays ($55) and Mondays ($50). Reservations are required, and kids must weigh at least 30 pounds and wear a lifejacket. Ask for the tandem kayaks, so you’ll be sure not to be separated out on the water.

Keep in mind that bats are never guaranteed to emerge en masse each night. Check austinbatrefuge.org for the most up-to-date predictions of bat flights based on weather.

A smaller colony, approximately 250,000–300,000 Mexican free-tail bats, lives along the Waugh Drive Bridge crossing over Buffalo Bayou Park, a lush, urban oasis that cuts through the center of sprawling Houston.

Volunteers with the Houston Bat Team host Friday night bat chats through October (on the first, third and last Fridays) about 20 minutes before sunset. To join, park in designated lots along Allen Parkway or at Spotts Park. The paved trail runs right underneath the bridge, which makes for a more intimate viewing of the emergence at dusk. Docents will momentarily shine a red light onto the bats hanging right overhead, so that you can see them more clearly, as well as point out resident night herons and hawks, all waiting to hunt the bats when they emerge.

To keep the path clear for bikes and roller skaters, you’ll need to sit on either the concrete curb or on the steep grassy slope, so don’t bother to bring chairs or blankets.

Earlier in the day while you’re awaiting sunset, let the kids work out their energy at the nature play area, about 1.5 miles east at 105 Sabine Street. The play area has a boulder rock scramble, a rolling lawn, a stream and waterfall, climbing logs and stones, and a 33-foot slide. Have your pup with you, too? Bring them along to the dog park, equipped with water pools and separate parks for pups large and small.

If you’re in town on October 22, join the KBR Kids Day, a free family fun festival along Buffalo Bayou at Tony Marron Park. The festival runs 11am–3pm, so you could have dinner and come back to catch the bat flight.

Over in the Texas Panhandle, Caprock Canyons State Park is known for its roaming Texas State Bison Herd, glowing sandstone canyons, and this colony of up to half a million bats that roosts in an abandoned railroad tunnel that was built in the early ‘20s. You’ll find the tunnel located along the Caprock Canyons Trailway, which is open to hikers, mountain bikers and horseback riders.

The state park offers guided tours only at the height of the season through late summer, but the bats are still around through October. To see them, plan for a day-long excursion through the Trailway. Call 512/389-8900 or go to texasstateparks.reserveamerica.com to make a reservation for your visit to Caprock Canyons.

You can also take advantage of the cooler October weather and camp overnight along the trail. Primitive campsite for one night (with a max of four people) are available along the trails. Pay the $12 fee at the self-pay station or at headquarters for multiple night stays.

(Note that since our Oct/Nov print issue went to press, Saint’s Roost Expedition Company has sadly ceased operations and is no longer offering bat tours.)

Bat World Sanctuary, a nonprofit accredited sanctuary outside Weatherford, hosts nighttime bat walks in downtown Mineral Wells on October 14 or 30. Meet in front of Witschorke’s Antiques at 8:15pm to join the search for native bats. Wristbands are $7; under 5 free.

This sanctuary is not open the public, but you can keep a watchful eye over the bats they’re rehabilitating online 24/7 on the bat cams. This includes real-time footage of the bats’ feeding tree and roosting area, semi-outdoor flight area, as well as their rescued goats and more views of the outdoor feeding areas that attracts squirrels, raccoons, opossums and deer.