SLANT 45, which stands for Service Learning in North Texas, was a community project program that aimed to involve children in community service.

Even the tiniest of hands can help make a difference. Powered by motivation and school pride, Oak Cliff’s Rosemont Elementary School students recently equipped themselves with shovels, trash bags and brooms to help clean up and beautify their school ground.

The school and surrounding community made it a priority to improve its environment after being approached by SLANT 45, a “service-learning” program established by the North Texas Super Bowl XLV Host Committee. Students of all ages (including students’ younger siblings) teamed up on a sunny afternoon in April to pull weeds from the campus’ grounds, sweep sidewalks, scrub dirty windows, pick up trash and debris and much more.

“Kids were really excited to make a difference at their school …. A pathway that was once a gloomy sidewalk was changed into a pretty walkway—and they were a part of that,” says Gina Marisa Salinas, the Dallas Concilio’s director of education.

Although kids are encouraged to author their own project with SLANT 45, the Dallas Concilio, a nonprofit that engages parent participation in their children’s education, was charged to help the school administrators and parents pull the multicultural students together behind the project on Rosemont’s campus. And Salinas says there was more to the clean up than brightening the school grounds. “Rosemont is a diverse school in a diverse community,” she explains. “The project was a way to get everyone involved together under one cause. The way a school looks is really important to a child’s pride.”

SLANT 45 provided education tools (including a playbook to explain how even the smallest act of kindness can help another person) to students, who “breathed life into the project, which was something first thought of by the school’s principal,” says Salinas. “SLANT 45 let the kids take ownership of this idea and make it their own.”

After about three hours of back-straining work, the kids high-fived each other after a job well done. And, as part of the SLANT 45 protocol, the kids reconvened with Salinas to discuss the pros and cons of the service project. Salinas adds, “They’re excited about doing more.”

Next up for Rosemont Elementary School students: planting a community garden on the school’s property to help provide homegrown vegetables to the school cafeteria, something that will begin to take shape this fall. Besides motivating the students to take on other service projects, the kids’ pride in their community grew exponentially after the SLANT 45 project. Salinas concludes, “The kids learned that they are responsible for their school, and their work can make their school a better place for everyone.” 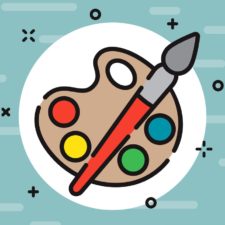