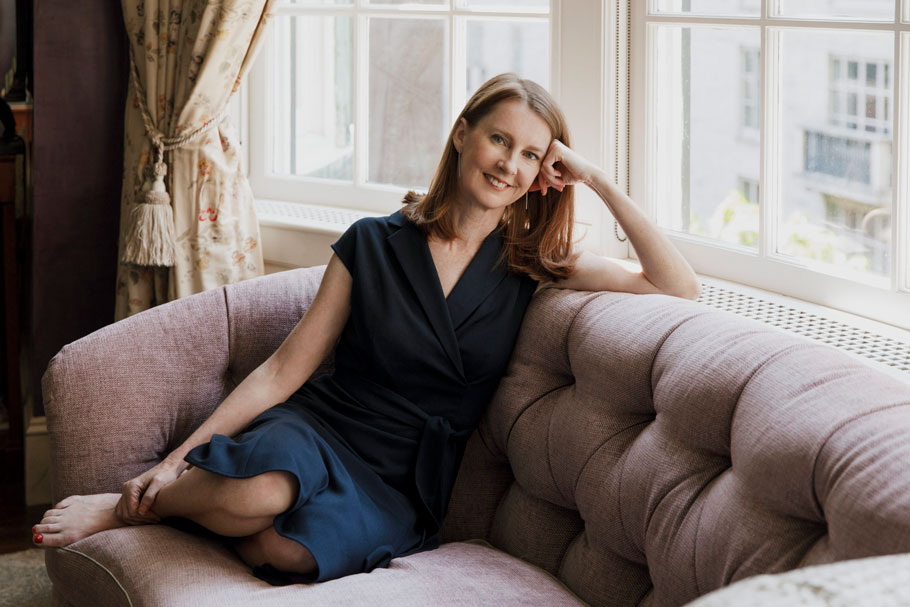 I have a new resolution: “Embrace good smells.” I stole it from Gretchen Rubin, scent enthusiast, mom of two and New York Times bestselling author of The Happiness Project, Happiness at Home, and other books. In these volumes, she chronicles her quest to make her life happier by studying happiness, studying herself and making resolutions accordingly. The result is a Happiness Project, a yearlong regimen of themed monthly goals – or, basically, lots and lots of to-do lists. But when a to-do list includes “Embrace good smells,” it looks a lot less daunting.

Rubin arrived at her to-do lists by figuring out what would make her happier and, in Happier at Home, what would make her family happier – happy wife, happy life and vice versa. And she was surprised by some of her findings; namely, how certain seemingly insignificant items and actions contributed to her everyday happiness. Like good smells.

“As I rushed through the kitchen, I could pause for a moment to inhale the sharp, sweet smell of a grapefruit; it didn’t cost anything, didn’t require anyone else’s cooperation, didn’t have any calories and didn’t take any planning or time to enjoy. It was a quick hit of an innocent indulgence.”

And it made her happier, so she resolved to fill her home with fragrance (and conveniently gave herself an excuse to try all the samples at scent shops). The lesson? Resolutions do not have to be philosophical or grand or unpleasant to improve our lives. And they do not have to involve an overhaul of our day-to-day doings.

“It’s true, my life has remained the same,” Rubin says, “the same husband and two daughters, the same work, the same apartment, the same daily routine.” But by following even mundane resolutions such as “Embrace good smells,” “Jump” and “Read the manual” (instruction manual, that is), Rubin heightened her happiness. “I was able to change my life without changing my life.”

Begin Your Own Happiness Project Anytime

Right now is traditionally a life-changing time of year … or not. To celebrate the 2012 New Year, The Washington Post compiled a list of 15 popular New Year’s Resolutions, while Time reported on “Top 10 Commonly Broken New Year’s Resolutions.” Unsurprisingly, more than half the resolutions listed by The Washington Post also appeared in some form on Time’s list, including “Get fit,” “Eat healthier,” “Spend more time with family” and “Volunteer.” Others, such as “Get organized,” did not earn the dishonor, but if the state of my closet year after year is any indication, those resolutions probably fail a lot too.

Why do we find it so hard to keep our resolutions? Rubin suggests that we make them too broad or too vague. Instead, she stresses the physical attainability of her resolutions as a key to keeping them: “It’s harder to keep a resolution to ‘Be a more loving parent’ than to ‘Get up 15 minutes early so I’m dressed before the kids wake up,’” she explains.

In that same vein, she rejects the popular resolution of “Spend more time with family” in favor of “Go on Wednesday adventures” with her oldest daughter – something concrete, schedulable.

Like a bedtime. In an interview with WFAA-Channel 8’s Cynthia Izaguirre, Rubin advised moms to get more sleep. “Many adults are sleep-deprived and then everything seems tough if you haven’t had enough sleep,” she said. But getting enough sleep can be difficult with the tantalizing distractions of social media, Pinterest and whatever’s on the DVR, not to mention the glorious adults-only time you enjoy after the kiddos go to bed.

RELATED: Mommy Burnout Part 1: Why Moms Are So Overwhelmed

Be the Influencer of Your Household

Other small daily changes can boost your overall happiness in unexpected ways. “Strangely, one of the most common resolutions that people mention to me as something that makes them happy is making their bed,” Rubin says. “It’s so easy, but it’s something that makes you feel like you’re starting your day right.” In combination with a bedtime, making your bed can add up to a much happier morning and consequently a happier day. “These little things that are very manageable can make a big difference,” Rubin says.

For example, in Happiness at Home Rubin resolved to “Kiss in the morning, kiss at night” in order deepen her relationship with her husband and make both a little bit happier. The resolution was easy, appealing and could fit into her daily routine, but despite its simplicity, the idea of scheduled kisses contributed to the larger goal of marital bliss. “Kissing at these times had the added benefit of ensuring that Jamie and I actually paid attention to each other as we came and went from home,” she explains. “By acting more loving, I made myself feel loving – and at the same time, made Jamie feel more loved.”

RELATED: How to Keep Your Marriage Strong After Kids

At times, however, necessary resolutions are not as pleasant as kissing. “Happiness doesn’t always make me feel happy,” admits Rubin, who reluctantly resolved to talk to her parents about their wills and rights of attorney. “It didn’t make me happy to have these conversations,” she says, “but it didn’t make me unhappy.” And she knew that taking care of business now would make everyone happier over the long haul.

And the feeling of keeping a resolution, appealing or otherwise, can cultivate a sense of satisfaction. So Rubin shaped her goals specifically to avoid the broken resolution blues. For example, instead of assigning herself an acupuncture regimen, Rubin resolved just to “Try acupuncture” – which she did, and found it wasn’t for her. The nature of her resolution assured that she could keep her goal without feeling pressure to do something fruitless.

But sometimes, our to-do lists just don’t get done. And Rubin tells her readers it’s OK. She wanted to go on monthly excursions with her husband, but after pitching the idea several times, they both agreed it would cause them more stress. “To be honest,” Rubin says, “I was a bit relieved by Jamie’s reluctance to adopt this resolution. Was it really a good idea to add another item to our already hectic schedules?”

Busy moms can relate, hence the appeal of a resolution like “Embrace good smells.” Does adding more air freshener to your life sit atop your list of New Year’s resolutions? Probably not. But if you bury your face in clean sheets or brew coffee partly because it smells so good, then perhaps it should.