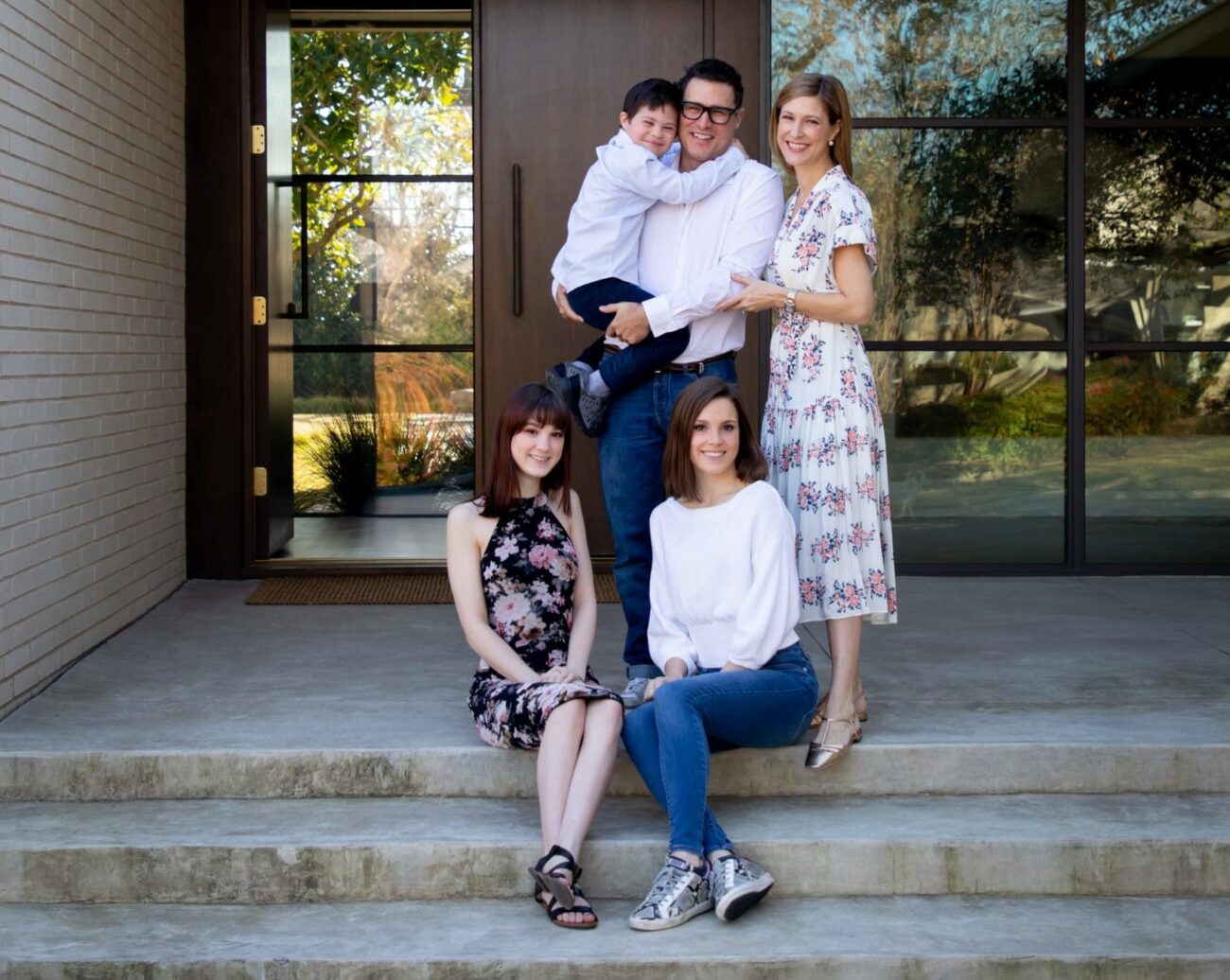 From the outside looking in, Shelly Rosenberg has led a charmed life. Most people see a successful writer and interior designer (she runs Acorn & Oak, an interior design firm tailored to families of children with special needs or disabilities), a dream home in Lakewood, a loving husband and three beautiful children. All of that is true, but a three-hour conversation with her reveals so much more.

Between her three children, Rosenberg has seen nine diagnoses ranging from anxiety to Down syndrome. She raised her two daughters solo for five years after her first marriage ended. Years later, when a sonogram revealed that her son Ronen would have Down syndrome, she took it hard. (See: A Pregnant Mom’s Reaction to a Special Needs Diagnosis.)

“I just thought to myself, Why can’t anything ever be easy?” she says. “My girls are wonderful, but they’ve never been easy because all of the things they’ve struggled with.”

Instead of playing the pity card, Rosenberg is using her experience as a designer and a special needs mom to not only better her own children’s lives but also to pay it forward—in addition to launching a business venture aimed at special needs families, she volunteers for a variety of charities and advocates for special needs moms everywhere through informal support networks she’s helped to create.

Admittedly, her “on paper” resume is pretty intimidating, but spend five minutes talking to her and you’re instantly put at ease by her lack of ego and down-to-earth nature. (In fact, you might even find yourself asking if you can be her new best friend.)

Age: 48
Born in: Fort Worth
Lives in: Lakewood
Alma mater: Texas Tech University
Significant other: Barry, her husband of almost 12 years
Where they met: At a UT vs. Ohio State football game, while Rosenberg was on a date with someone else
Children: Daughters Brinson, 21, (who has anxiety, dyscalculia, ADHD and a reading disorder) and Campbell, 18, (who has anxiety, depression, ADHD and a reading disorder and on the autism spectrum) and son Ronen, 7, (who has Down syndrome)
Follow her: Instagram @acornandoakbyshellyrosenberg and on Facebook

DFWChild: After your divorce, how was life as a single mom?
Shelly Rosenberg: It was a really dark and hard place for the first couple of years. The girls were 1 and 3 and I worked full time.

C: How did the girls accept your husband Barry in their life?
SR: When Barry and I started dating, it was actually Brinson who told me he was “the one.” She said he felt like a real dad who just wanted to spend time with them instead of trying to buy their affection like some of the other men [I dated] had. When Barry proposed, he proposed to all three of us.

C: Did you and Barry want to have kids together?
SR: We did, but knowing both of our ages, we knew it would be tough. We had two miscarriages before having Ronen.

C: How did you react when you found out about Ronen’s diagnosis?
SR: Honestly, it was just such a blow. I was angry. Barry immediately began researching, making calls and learning everything he could. I went into survival mode. I knew this was going to be my last baby, so I threw my energy into focusing on how I was going to love and connect with Ronen as much as I could. I really didn’t care about the details, because I knew I would learn as I go. The tough times would come, and I just wasn’t ready for that yet.

“They were once thought of as such a burden on society, but people are finally realizing what an asset they are.”

C: Did you both grieve Ronen’s diagnosis?
SR: Yes, definitely. I think we both cried for two or three days straight. But once I accepted it, I felt like this was my destiny. Not only could I do it, I was meant to do it.

C: How was your pregnancy with Ronen?
SR: It was terrifying. Throughout the pregnancy, they suspected several other issues like club feet and water on his brain. It got to the point where I finally told them to stop telling me. We were having this baby no matter what, and we’d deal with whatever we had to.

C: Has Ronen changed you as a person?
SR: Absolutely. He has refined me and honed me. In every way, I’ve become so much softer.

C: What does the future look like for Ronen?
SR: While there’s uncertainty in any child’s future, I have no reason to believe that he can’t live a normal life and even live on his own someday. There’s such a movement and shift in thinking these days about this special population of adults. They were once thought of as such a burden on society, but people are finally realizing what an asset they are to companies because they’re dependable and such hard workers.

RELATED: Why Young Adults with Special Needs Thrive at Work

C: What does life look like now for Brinson and Campbell?
SR: Brinson is currently a junior at TCU majoring in psychology. She’s probably hasn’t completely caught up with her neurotypical peers, but she’s doing great. Campbell has had more challenges. She doesn’t drive and is perfectly content to be at the house most of the time but has found a social life online, which we’re totally OK with.

C: Campbell recently got diagnosed with autism spectrum disorder. What led to such a late diagnosis?
SR: I’d always kind of suspected that Campbell was on the spectrum, but since she didn’t present with the typical signs of autism, people always kind of brushed it off. But as she got older, I was really tired of getting feedback from friends who were bold enough to tell me they thought she was rude, unfriendly and just a lazy Millennial. It was partly ego on my part so I could prove I wasn’t a bad mom. I wanted some validation that she was just wired differently.

C: How does Campbell feel about her diagnosis?
SR: In her typical sarcastic, rebellious teenage way, she was like, “Mom, do you feel better now?” But I do think it was validating for her, whether she’ll admit it or not. She did end up going to beauty school and graduated from there in December and also got a small part-time job.

C: How has your experience as a special needs mom shaped who you are today?
SR: It’s taught me what’s truly important in life. I just want to do right in the world and raise beautiful human beings. Despite our trials and tribulations, I feel it’s my duty to pay it forward for all of those parents who may not have the means to do what we’ve been able to do for our children.

C: You’ve recently made a shift in your design career toward working with special needs families. What led to that?
SR: I was working with these high-end clients and it just wasn’t bringing any joy to my life. Once we had Ronen, keeping work and home life separate just became impossible, and I felt like I was living in this world that didn’t understand me anymore. The passion [for design] is still there, it’s just morphed into what I call functional, adaptive design. A lot of times as special needs parents, we have to sacrifice beauty for function, so I’m focused on helping families create spaces that combine the two. I want these families to know that we can still have the pretty!

C: Tell us about your latest venture, acornandoak.com.
SR: The initial thought was to work individually with families who needed help creating adaptive living spaces in their homes, but that didn’t feel big enough. So it morphed into a website with a public blog and then a membership site. I’ll use my design expertise to help families adapt their homes to reduce stress and meltdowns and create more successful results for the entire family. Our launch day is March 21, World Down Syndrome Awareness Day.

C: Interior designer, writer, special needs advocate, volunteer, wife and mom—how do you have time for everything?
SR: I struggled through a chapter of life where I was a single parent with minimal help, and it was a dark place. Now, years later, I’m lucky enough to have the means to afford full-time help, but it doesn’t mean I don’t feel guilty about it. It does mean less time with the kids, but at the end of the day, I know I’m doing something for the greater good.

This interview was originally published in February 2020.