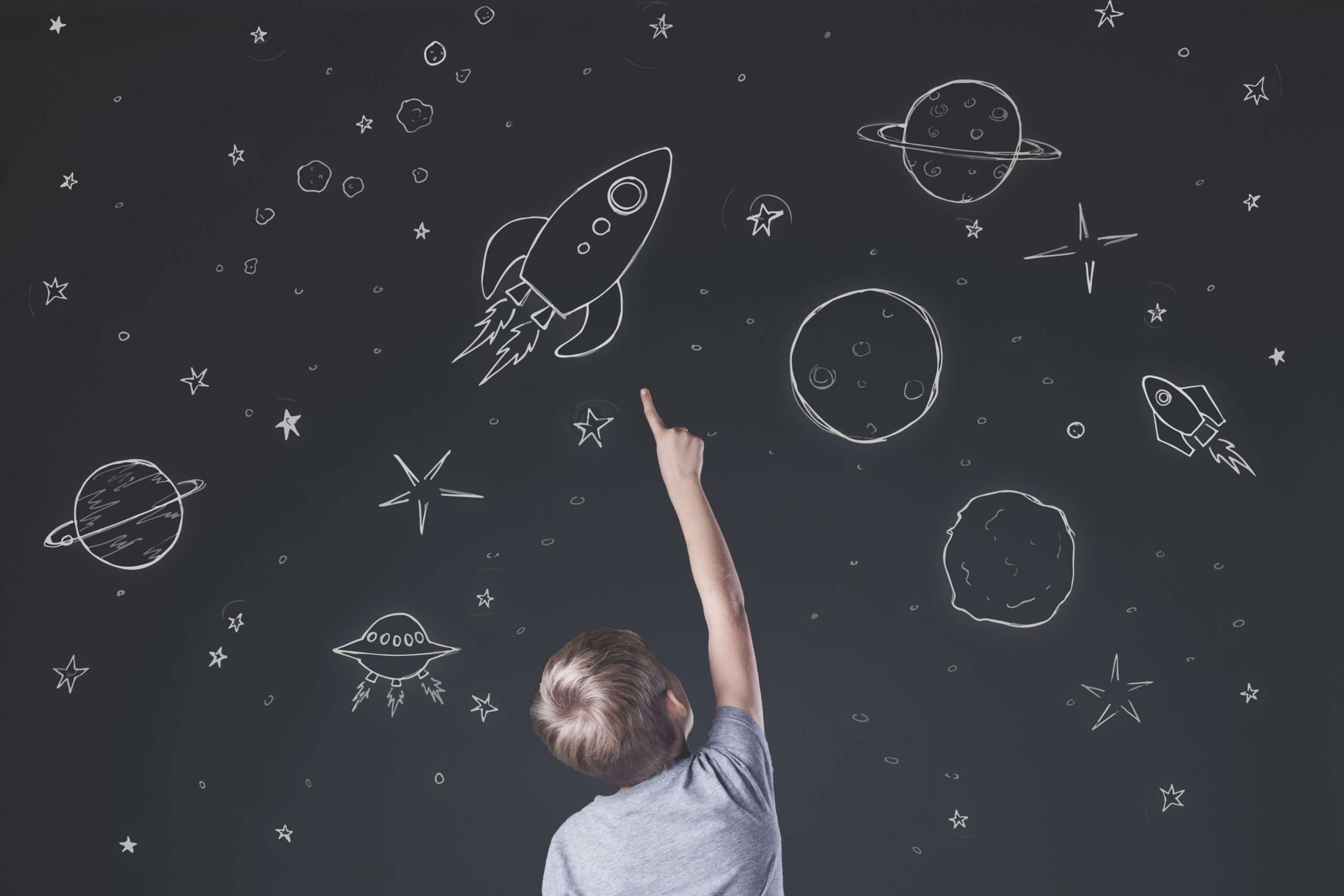 “I love astronomy because it makes me feel small,” says Tiara Chapman. “Looking at the night sky just reminds me to keep things in perspective.”

As the nature programs coordinator at Lewisville Lake Environmental Learning Area (LLELA), Chapman shares her love for the cosmos with kids and families through events like Stars on the Prairie, where science mingles with creativity. She gets a kick out of the epic sagas spun by the youngest observers at LLELA’s programs. “For those 5-year-olds, asking them to make up their own stories [about the stars], sometimes it’s a battlestar fighting a battlestar—that’s pretty cool.”

In addition to the entertainment value, teaching kids about astronomy engages them in the scientific process—no laboratory needed. Sure, the stars at night aren’t as big and bright in the light-polluted heart of North Texas, but you can still experience outer space with your kids right outside your door.

First, Look at the Moon

“If you only have two minutes to hold their attention, you go out and look at the moon,” recommends Morgan Rehnberg, Ph.D., chief scientist at the Fort Worth Museum of Science and History. “What’s really neat is that as the moon changes over the course of a month, you’re going to see different things. Sometimes you’ll see the big lava plains; other times you’ll be able to see the craters on the moon.”

Kids with early bedtimes can even look for the moon during the day (a good reminder that celestial bodies are always there, even when we can’t see most of them). Rehnberg suggests having your child draw a picture of the moon each time so they can see how it changes.

Another reason to focus on the moon: You don’t need any fancy equipment to see it. In fact, for any casual backyard stargazing, Rehnberg says it’s better to have no telescope at all than a cheap one.

“Buy a nice pair of binoculars instead, and you will see so much more and have such a better experience,” he suggests. “It takes a lot of effort to get [a telescope] pointed in the right direction—it’s a lot of fiddling with the knobs and things—and that’s what loses the attention of the kids. But a 4-year-old can pick up a small pair of binoculars and manage to point it at the moon totally on their own, and that’s such an empowering experience.”

What To Look At in the Night Sky

To eliminate downtime and your kids’ ensuing restlessness, make a plan before heading outside. Use NASA’s night sky planner or other local resources (see sidebar on page 54) to figure out what else besides the moon you want to look at.

You can also download an app like SkyView Lite to help you identify celestial objects—as you sweep your phone across the sky, SkyView Lite will show you the names of the stars, constellations and planets.

If you want to go old-school, there’s a low-tech tool called a planisphere, or star wheel, which has a map of the sky that you spin to match the date and time. Make sure you buy or download one for our latitude (about 33 degrees north). To read your planisphere—and do anything else outside—without totally killing your night vision, you may want a red flashlight, which you can hack by covering a flashlight in layers of red cellophane. Creepy, perhaps, but it won’t blind you if you accidentally look at it.

Jacob Moldenhauer, Ph.D., chair of the physics department at the University of Dallas, sometimes hosts casual star parties for his two kids, ages 9 and 7, and their neighbors. “A lot of times we look at the moon because it’s very easy for kids to spot, or if they accidentally bump the telescope it’s easy to find again,” he says. “As it gets later or we get an older audience, we might (depending on the night) be able to see a few planets through the telescope.”

He adds that his children tend to be more interested in planets than stars. “They’re bigger and more dynamic, and a lot of times you can see colors associated with the planets,” he explains.

To keep kids engaged, Chapman encourages them to look for asterisms, or groups of stars that aren’t official constellations. With younger ones especially, she’ll ask, “Can you see a heart in the sky? Do you see a triangle? Do you see a square?”

She mentions that the Perseid meteor shower peaks this month (Aug. 11–13). “It’s one of the most consistent and brightest meteor showers you can see with the naked eye,” she says. “It usually happens late at night or early, early, early in the morning, so you may have to use some candy to bribe the kids—let’s be honest.”

As exciting as shooting stars might seem to kids, watching and waiting for meteors to streak across the sky will test their patience (and yours). The experience may be better for older kids who won’t get fidgety after five minutes of staring at the sky.

For the best views of meteors and stars, be sure to turn off all your outside lights; you could even politely ask neighbors to switch theirs off for a few minutes too.

If you want to voyage beyond your backyard, state parks (especially those outside the glow of the Metroplex) are ideal for stargazing—and generally, the further west you go in Texas, the brighter your views. Use a light pollution map like the one at darksitefinder.com to help you escape the city lights.

Within DFW, our local lakes might be your best bet, reveals Moldenhauer. “Being out there on the water, or being close to the water, is a good spot. You just don’t have as many lights out there.”

Because nearly everything you’re looking at is literal light-years away, astronomy can “seem kind of imaginary,” says Rehnberg. “The lack of tactile-ness can be a challenge, and so I would encourage parents to make connections [to] things we have here on earth. If a kid asked a question like, ‘What is the moon made of?’ you might say, ‘I don’t what the moon is made of, but maybe it’s made of the same stuff that the earth is made of. Can you find something that the earth is made of?’”

Consider crafts or activities that require touch in order to make space more accessible. (The sidebar at direction has a few ideas.) “With younger kids, it may be that you try and build a little model of Mars’ planetary surface out of Legos or something like that,” Moldenhauer says.

You can also compare what you see in the sky to something familiar on Earth. These real-world comparisons need not be elegant; look for illustrations in everyday objects or even the dinner menu. “When I talk about the sun and the sun’s features, I talk about the surface being like a pot of boiling spaghetti sauce—it bubbles and changes and is very dynamic,” Moldenhauer reveals. “The sun’s surface also bubbles and sometimes has these explosions off of it.”

Chapman adds: “Some stars pulsate, and we talk about how a star has hiccups.”

One exception to astronomy’s general otherworldliness are meteorites—actual pieces of space that have crash-landed on Earth. “We spend all our lives as astronomers trying to understand things we can’t touch,” Rehnberg says, “and then once in a while a piece of that stuff just falls out of the sky, and we can pick it up, and that’s amazing.”

He recommends a field trip to Texas Christian University’s Monig Meteorite Gallery (as soon as it reopens), where kids can see space rocks primarily found in Texas, including a Tarrant County specimen that weighs over 100 pounds.

Ask Questions & Find the Answers Together

For all the oohs and aahs that outer space inspires, it should ideally stir up intellectual curiosity too, Moldenhauer says. “You want them to appreciate the beauty of it, but you also want them to be curious about what they’re looking at. That really can help [them] have an appreciation for science later on in their life.”

Prompt your kids to ask questions about what they see in the sky—and, Mom and Dad, it’s OK if you don’t have all the answers. “Modeling the behavior of not knowing is a good thing, because all of science is not knowing things and trying to figure out the answer,” Rehnberg says. “One of the best ways for the family to experience the universe together is to go out, look up, ask a question and then work together to find the answer.”

Besides Google, your quest for answers might include emailing local experts such as astronomy professors—Moldenhauer says he welcomes queries from the community—and attending star parties. The latter will give your family a chance to look through telescopes that are already pointed at interesting things and manned by knowledgeable, passionate astronomers.

Even then, you’ll likely hear some “I don’t knows,” which for Rehnberg is just part of the magic of astronomy.

“There’s not an astronomer in the world that knows the answer to all the things that a kid might ask,” he says. “But all those answers are out there, and finding them is half the fun because you’re discovering something new—whether it’s new to your family or totally new in the world, and that’s just a really wonderful feeling.” 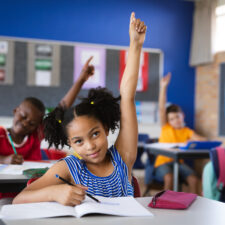