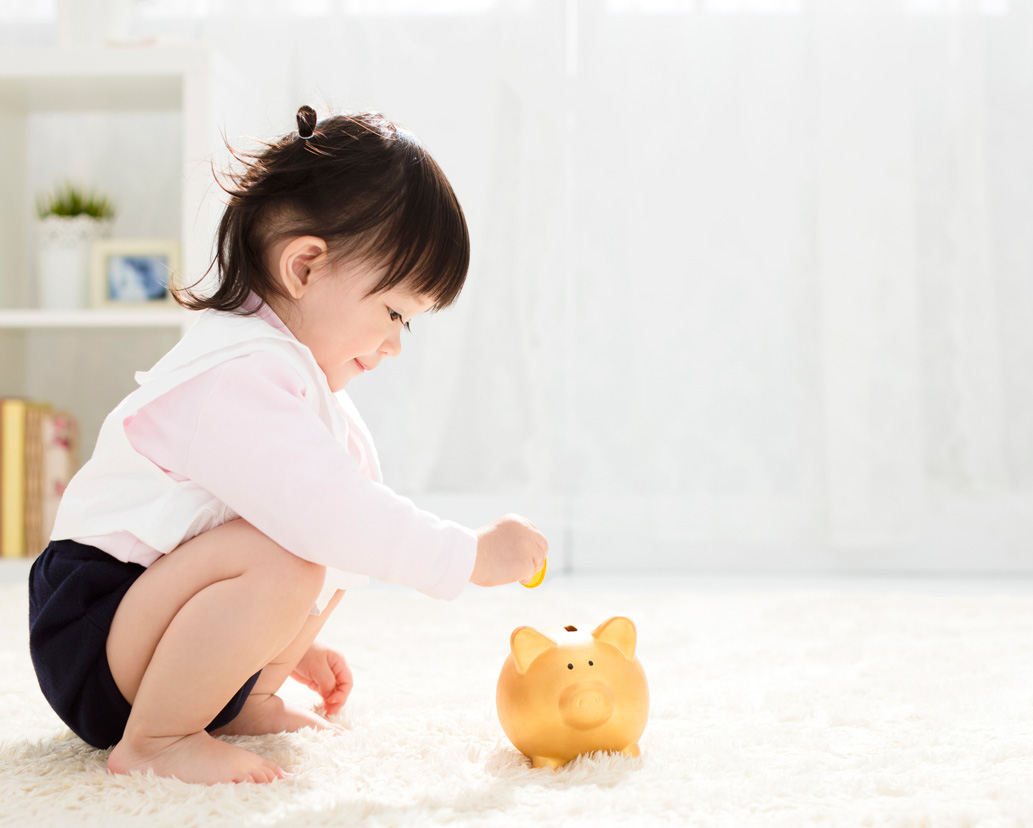 It’s a problem virtually every parent encounters, most often when they run into the store. Your child spots something they want. Let the pestering and begging begin, right? Most kids don’t really need another toy. But there’s something else that’s annoying about the “can-I-haves.” Kids often don’t really understand that toys cost money and that money isn’t unlimited. Spending even a little here and a little there adds up. Hey, that’s a lesson some adults struggle with too.

While there’s not much you can do in the moment (insert in-store meltdown here), there is something you can do over time: teach them about spending and saving. There’s a lot to understand, but you’ll be doing your child a favor in the long run. We cover digital financial literacy, from credit cards to cryptocurrency—but let’s start with the basics here.

The right age to begin introducing the concept of money may be younger than you think. “I suggest parents start as soon as their kids are asking for things and old enough to not put money in their mouth,” says Plano mom Keli Calderon, who founded The Smart Money Academy, a financial literacy program with online classes for kids.

Numbers and counting are fundamental to money, so start there with your toddler. Count beads, Goldfish crackers, buttons, anything—then start counting coins. Go over the names of the coins and what they’re worth. To reinforce those concepts, MidCities Montessori preschool teacher Laura Lee uses coin games. “Parents can play the mystery money bag game, where you reach into a bag of coins and pull out one coin each and have the child determine what coin holds the largest value,” the Bedford teacher suggests. You can also hold out two coins and ask them to identify, say, the nickel. Kids can sort a pile of mixed coins to get used to the different sizes, colors and designs. As your child moves into addition, help them add a few coins and bills together.

Counting money is important—but how do you help your child understand money’s value and meaning? Calderon says it’s important for kids to see bills and coins being exchanged for items at a store. Small children need to see and handle physical money; they’re not ready for abstract forms of money like a debit card, according to Calderon. Still, it’s not enough for kids to see that they can buy things with money. They need a sense of where money comes from.

“They understand at an early age, ‘This is my job, and this is how I get paid.’”

That’s why Calderon recommends that parents give their children simple chores for an earned allowance. With an earned allowance (as opposed to money given without responsibilities), kids make the connection between work and pay. Richardson ISD teacher Christina Etri has seen this play out in her classroom. She’s a junior high teacher now, but when Etri taught third graders, each of her students had an in-class job and got paid in classroom currency. “They understand at an early age, ‘This is my job, and this is how I get paid,’” Etri says. Her students could “buy” a pajama day or an item from the classroom store, or save their earnings for an end-of-the-year auction.

Unsure what concepts to cover with your child? The Smart Money Academy’s Keli Calderon recommends these areas of focus:
Preschool–Grade 2: The function of money. What is it for? How is it earned? What happens if it is lost?
Grades 3–7: Managing money. Saving for bigger items, budgeting and prioritizing spending.
Grade 8 and up: Leveraging money. Investing and passive income, purchases as investments (such as a car to get to work, or a college education).

Saving for the Future

To introduce the idea of saving to your child, help them think of something they’d like to save for. Since kids are often visual learners, give them a clear jar for storing their money and a chart to color in their progress toward the item. Starting with a relatively small purchase is a good idea, so they can experience success quickly.

Some kids will be natural savers; others will want to spend as soon as the money is in hand. To encourage saving, offer to match their savings for large purchases or provide opportunities for extra chores. But don’t force saving. Calderon says it’s a skill generally learned over time. “Saving out of obligation may ultimately lead to resentment and is a lost learning opportunity,” she shares. “Since my husband and I don’t pay for everything our kids want, they are self-motivated to save for those items.”

While you’ve probably seen ads for kids’ debit cards or similar products, stay with physical money until around age 9 or 10. “Studies have shown that spending cash actually triggers pain receptors in the brain. This doesn’t happen with debit and credit cards,” Calderon says. “The pain is an important part of teaching kids the value of money. If we move to virtual money too quickly with our kids, spending money becomes ‘painless’ to them.’”

Another pain they need to feel: money mistakes. “It’s fine to give [your child] advice about a purchase,” Calderon says, “but there are great lessons to be learned in mistakes, too.”

For parents who aren’t particularly savvy when it comes to money, there might be some hesitancy to attempt to teach their kids. Calderon admits that her own finances were a mess when her sons were little, so she started them on money lessons later. If you’re in a similar position, she encourages you not to wait. “It is important to push through these feelings so that money issues do not become a generational legacy,” she urges, pointing out that parents don’t have to be stock market experts or real estate moguls. “Just learning and passing on the basics can make all the difference.”

RELATED: Why You Should Talk to Your Kids About Finances