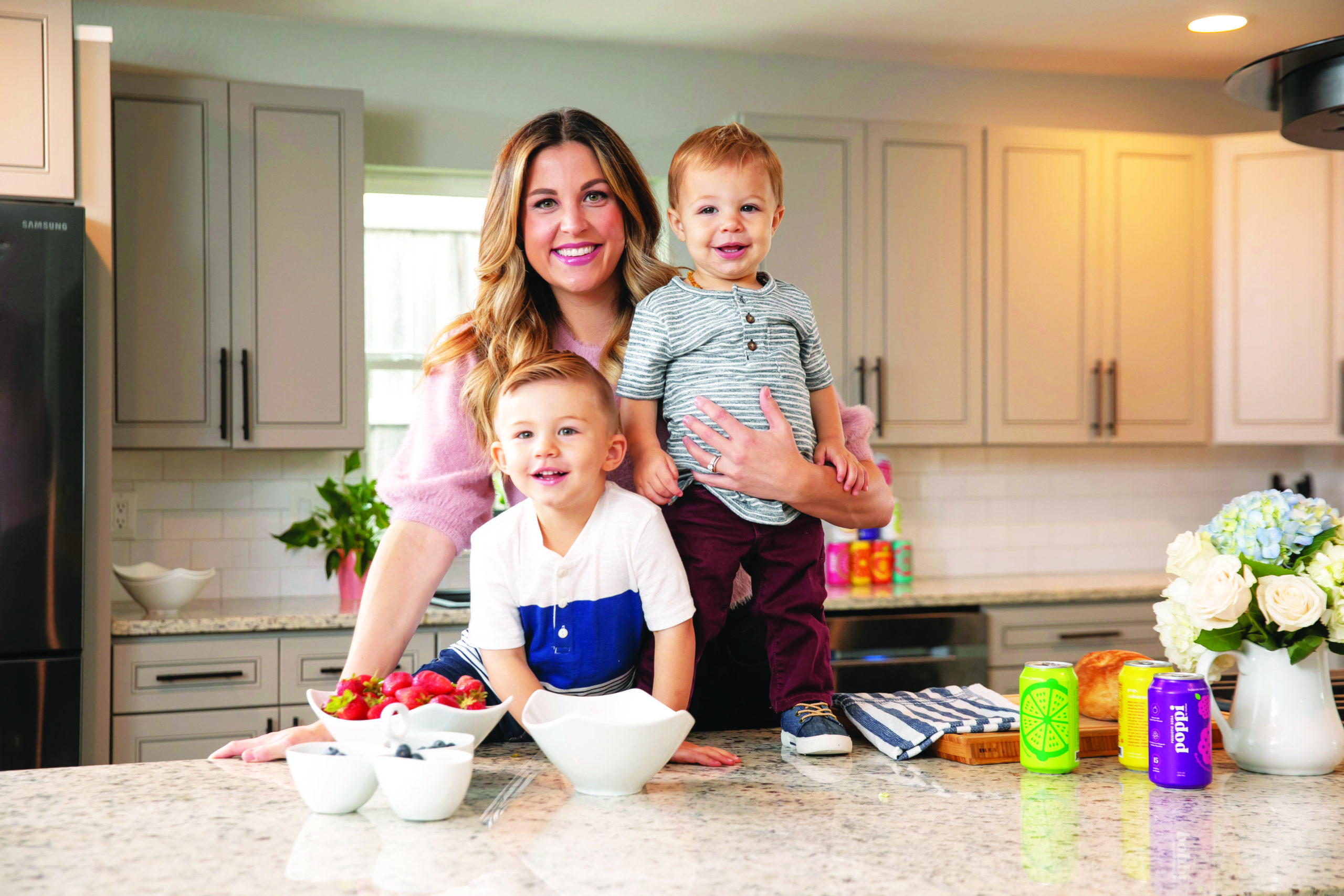 After four years of working with doctors to figure out her stomach issues—with no answers—Allison Ellsworth, co-founder of Mother Beverage, now renamed Poppi, took her health into her own hands. She turned to Google and read about the benefits of apple cider vinegar.

“I was amazed, within two weeks of drinking it every day, how amazing I felt,” Ellsworth says. “[I] immediately had lost that bloat, and I felt more energetic, and it was just crazy that this apple cider vinegar could do this to you.”

Now two sons and a Shark Tank deal later, she and her husband are expanding their beverage company nationwide with new branding and packaging—they’re moving from bottles to cans and changing the name to Poppi. “Renaming your company is like renaming your child,” Ellsworth says. “But we love it.”

DFWChild: Tell us a little bit about your story.
Allison Ellsworth: In my previous career, I was on the road a lot. I traveled town to town in small little towns across the U.S. for about 10 years, living in hotels, and eating on the road, and not really living the healthiest of a lifestyle. I had that bloating feeling in the stomach where your gut kind of always hurts, and my face was always a little red. I read online drinking apple cider vinegar could help with a lot of those issues. So I was like, “What’s the harm in trying [something] natural?”

C: Is that how you started Mother?
AE: Yeah. I couldn’t get Stephen to try it, or my family. So I’m like, “I’m going to come up with an idea, or a way, or a recipe to make this taste good so I can get everybody else to feel as good as I feel.” I spent a few months in the kitchen doing different things, like I would take real raspberries and simmer them down to make a syrup.

A lot of people … add a bunch of honey, and they mix it with all these different things, and you end up drinking like 200 calories in the morning. What was really important to me was to taste good as well as keep it healthy. So, I was just playing around with it, and then I started giving it out to friends and neighbors, and they were like, “Wow, this is actually pretty good.”

C: So, it took off organically?
AE: I just started selling it at the farmers market, and it just took off. Within the first three weeks, the Whole Foods buyer was there, tried it, and she’s like, “Here’s my number. Call me. Let’s get you guys in Whole Foods.”

C: Talk about serendipitous!
AE: I know, and it was still in, like, prototype Mason jars. We were just making it in our kitchen at home. I never really set out to start a beverage company. It just kind of happened.

C: How did you go from Mason jars to Whole Foods?
AE: We ended up opening our own production facility. At that point it had taken off quite a bit at the farmer’s market, so we were like spending 10-hour days filling these by hand. It was really crazy. If you’re going to sell in stores, you have to be in commercial kitchens. You can’t make it at your house anymore. So we signed a lease and just started making plans to really grow this.

“I’m going to come up with an idea, or a recipe to make this taste good so I can get everybody else to feel as good as I feel.”

C: How have you balanced building a business and having small kiddos?
AE: It’s actually really difficult. From the outside it looks great, but it’s really tough because when we started the company, I was pregnant. We were a startup. We weren’t paying ourselves. Stephen actually got a second job, was working at night, after working 80–plus hours at Mother.

I was putting caps on, filling bottles, the day I went in labor. We just didn’t have that luxury where you get to take three months off. At one point, I just wanted to be a stay-at-home mom and just focus on my baby.

C: And then you decided to have a second child.
AE: I didn’t want to sacrifice having a family for the business. So I got pregnant with our second, and Stephen kind of backed off [from] depending on me so much that I was actually able to enjoy being a mom a little bit. 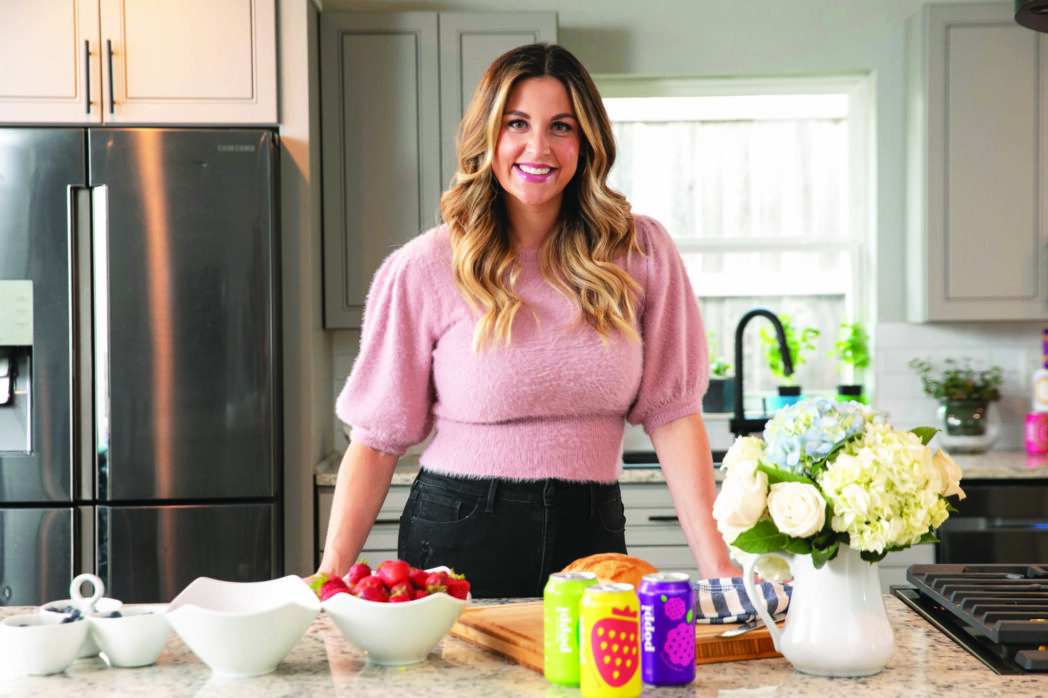 C: How do you make time for romance and your husband?
AE: It’s hard, I think, to find the balance sometimes of not just being roommates, best friends and business partners. We go on a date, and we just talk about business the whole time. It’s because we’re so passionate about it. It’s funny because I get a lot of the credit, and I get to do all of the fun interviews. He would not want to do any of that. He’s like, “Well, you deserve it, Babe.” He’s just so sweet about it, and he realizes we play our roles.

C: You signed a deal with Rohan Oza on Shark Tank in December 2018. What has that been like?
AE: In the beverage industry, he’s like Steve Jobs or Bill Gates as far as shaping brands and starting at the bottom and working his way all the way up to make you a really successful national brand. They actually didn’t tell us he was a Shark—you don’t know who your Sharks are until the night before you go on. The whole Shark Tank process is very hush hush. They don’t tell you you’re going to be on the show until a week before.

C: And you were nine months pregnant.
AE: Yeah, they are like, “Are you sure you can fly?” I’m like, “I will have my baby in California. I am coming to Shark Tank.” So we’re backstage at Shark Tank. I didn’t want to stress myself out because I didn’t want to go into labor. I think was a blessing that I was so pregnant because it kind of brought this calmness over me. You’re actually in there for like an hour talking with them, and they cut it down. You pour your blood, sweat and tears into this thing.

C: What’s the biggest thing that’s happened since signing with Rohan?
AE: Something crazy, which we haven’t told anybody yet, is we’re actually changing the name of the company. What we’ve found is vinegar is very polarizing—the word “vinegar.” It just scares a lot of people off. So we’re actually just marketing ourselves different to be more successful and go after more consumers. We’re basically just recategorizing ourselves as a prebiotic soda. It’s the exact same liquid. Our formula is not changing at all.

C: Sounds like people are judging a book by its cover.
AE: It’s funny—in consumer studies [with the new packaging] everyone is like, “This tastes so much better with the prebiotic soda.” It’s the exact same.

We’re switching from bottle to the cans because glass is definitely recyclable, but cans are a lot easier, and we’re trying to do our part with the footprint of being easy to recycle. The packaging is really fun and cool and more for the masses. This [current] packaging is very feminine. We found a lot of women were buying it for their husbands, and then they got hooked, but if they walked up on the shelf, they wouldn’t pull it themselves. Literally just because of the look.

What’s really been amazing through the whole process is Rohan is very involved with the decision–making and the big stuff, but he’s not interested in running the day-to-day. He still really values us as founders.

C: It seems like this has been a major passion project for you and your husband no matter how much work it takes.
AE: It goes back to the fact that I didn’t start this to get rich. I genuinely had a problem, this solved it, and I wanted to help other people. I know it can make people feel better—I get emails and people are calling.

We have grown quite a bit, but we’re still small in the scheme of things. At the beginning of the year, we just started paying ourselves. My husband finally got to quit the second job that he was working that was paying our mortgage. It’s just crazy because everyone thinks, “Oh, you guys made it, you were on Shark Tank,” but it’s still so scrappy.

This interview was originally published in November 2019.