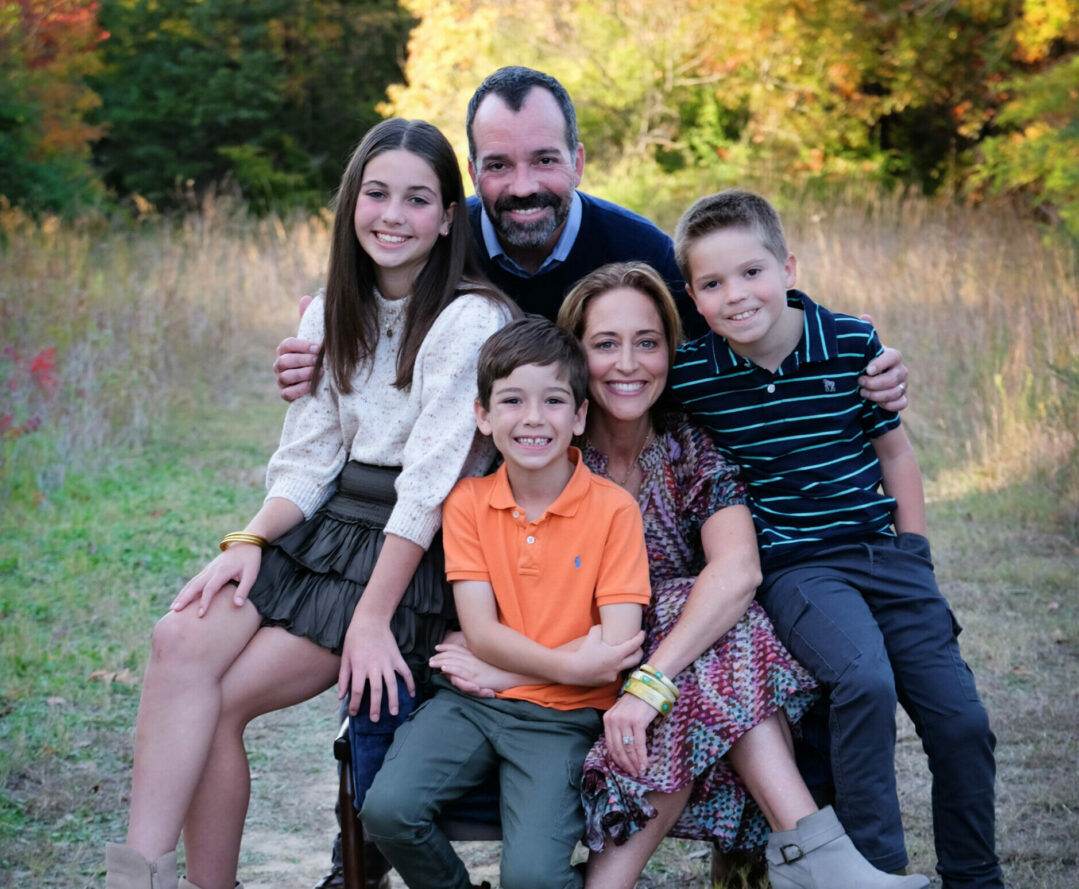 Anna Lombardi Daigle and her two younger sisters grew up in the restaurant business. Their Italian-born father, Alberto, opened his first restaurant, Lombardi’s, in 1977. Today, he owns 18 different eateries and shows no signs of slowing down.

So, it would seem only natural that Lombardi Daigle would grow up and join the family business. But not so fast, Lombardi Daigle says. There was a time when she “refused to go into the restaurant business”—instead working in the title department at a car dealership after graduating from college.

The mom of three also thought she’d never have children, picturing herself much more as the “fun aunt” type. But Lombardi Daigle describes meeting husband Marc as fate—and the catalyst for wanting children of her own. One could say the same about her eventually following in her dad’s footsteps, becoming a restauranteur in her own right.

DFWChild: How did you and Marc meet?
Anna Lombardi Daigle: After moving back from New York, we were the only single people at a party a mutual friend of ours hosted. Looking back, it might have been a set up.

DFWChild: Was it love at first sight?
ALD: We had so much in common, it felt like kismet. Unfortunately, though, the timing wasn’t right for either one of us.

DFWChild: But you managed to find each other again?
ALD: Yes, we ran into each other eight months later and the rest is history. We’ve been married for 16 years now.

DFWChild: You’ve mentioned that you never saw yourself being a part of the family business. What changed that?
ALD: After a year of working at the car dealership, I went to work for my dad, learning about the business and finance side of owning a restaurant which I really enjoyed.

DFWChild: But you still weren’t sold on being a restauranteur. What prompted your move to New York?
ALD: I had always wanted to live in New York. Being young and having no responsibilities seemed like the perfect time to do something like that.

The food was authentic, the staff was friendly, and it felt similar to the casual, neighborhood bistros in New York.

DFWChild: Is that where you grew more passionate about the food business?
ALD: My dad had a connection at Dean and Deluca (a chain of upscale grocery stores), and I started off working there in the cheese department … cutting cheese. I received a promotion fairly quickly that allowed me to work with the other departments, planning out meals and really getting to learn more about the food business.

DFWChild: Your time in New York was somewhat short lived, was that because of 9/11?
ALD: Partially. I moved to New York at the end of 1999 and moved back to Texas in 2002. September 11th really put things in perspective as far as the importance of family, and then my dad called and said he could use some help with his restaurants. Tourism had been a major driver in the success of his restaurants and so he needed to reinvent his approach.

DFWChild: And finally you were inspired to join the family business?
ALD: My dad had opened Penne Pomodoro at Snider Plaza and I really loved the concept. It was so much different than his other restaurants. He perfectly honed in on what was important at the time—an affordable, family-friendly atmosphere. The food was authentic, the staff was friendly, and it felt similar to the casual, neighborhood bistros in New York.

DFWChild: That’s when you decided to open a second Penne Pomodoro location?
ALD: At the time, they were giving out small business loans to women and so I thought, why not apply? The worst they could say is no. And so my dad lent me the money (yes, I did pay him back!) and at age 27, I opened the Penne Pomodoro location at Preston and Forest Lane.

DFWChild: Working in the family business can bring about interesting dynamics. It’s you, your sisters and your father—how does that work?
ALD: Working for your father definitely comes with higher expectations than working for someone else. But, overall, he’s been great about stepping back and letting me do things on my own. And my sisters and I are super close, so even if we disagree about something, we’re able to easily let it go.

DFWChild: The restaurant business is a 24/7, all-consuming industry. Do you have advice for moms in similar roles trying to balance having a career and being a good wife and mom?
ALD: Yes, it’s impossible to do it all. I tried to do everything and then realized I couldn’t. It truly takes a village. Take turns with other parents on taking kids to their various activities.

Learn to graciously say “no.” It was hard at first, but you’ll be surprised by the respect and understanding people have for that. I try to focus on doing the things that really light me up. If it doesn’t, I don’t do it.

DFWChild: What about being a mom has surprised you the most?
ALD: I’ve never been a “warm and fuzzy” person so I had no idea what kind of love it would really feel like. It’s the most powerful emotion you can ever experience.

DFWChild: What’s the parenting dynamic like between you and Marc?
ALD: We’re definitely on the same page. He’s a wonderful father and since he started working from home during COVID, he’s been a huge help with all the day-to-day tasks.

DFWChild: What about parenthood do you find the most challenging?
ALD: We just want our children to be good human beings. With all the social media out there, children have forgotten how to communicate, look people in the eyes and to be polite and have conversations with people.

DFWChild: Your family is being honored at the Together for a Cure fundraising luncheon for the National Multiple Sclerosis Society. What is your connection to the charity?
ALD: Growing up, my mom was very involved with the Yellow Rose Gala, a well-known MS fundraiser. I remember helping her stuff envelopes and do other administrative things as a child. I had no idea of the personal connection, I just thought we were being charitable.

DFWChild: You didn’t learn about your mother’s MS diagnosis until you were a teenager?
ALD: That’s right. She was diagnosed in 1984 but because her diagnosis was the progressive form, she wasn’t showing many signs yet.

DFWChild: I understand you were responsible for founding the fundraiser?
ALD: Yes, I helped co-found the luncheon with Carla Rosenberg 15 years ago. It’s a very special honor to see how our family’s involvement has come full circle.

Family Fun Time
With all the weekly homework and sports, we try to focus on experiences. We love to travel and we also like to go on individual “dates” with each of the kids.

Party of One
I thrive on my alone time. I take daily walks around White Rock Lake. No music, no podcasts, I just try to be present in the moment.

Keeping the Spark Alive
With Marc, it’s the little things. Especially since he lives at home now, we can go out for lunch, take a walk together or we may both have a 30-minute break in our schedules where we can just sit and talk.

Fave Lombardi Family Restaurants
Our family’s top three are Penne Pomodoro, Taverna and Toulouse. It just makes it so easy, especially with all the kids’ activities. Our kids have no idea that most families don’t get to eat as much lobster and steak as we do.

Trip of a Lifetime
This summer, we’re taking a bucket list family trip. We’re taking the kids to Europe to show them their roots. We’ll do both London, where my mom is from, and then Italy where my dad is from. As for me, I don’t know why but Vancouver and Montreal both really intrigue me.