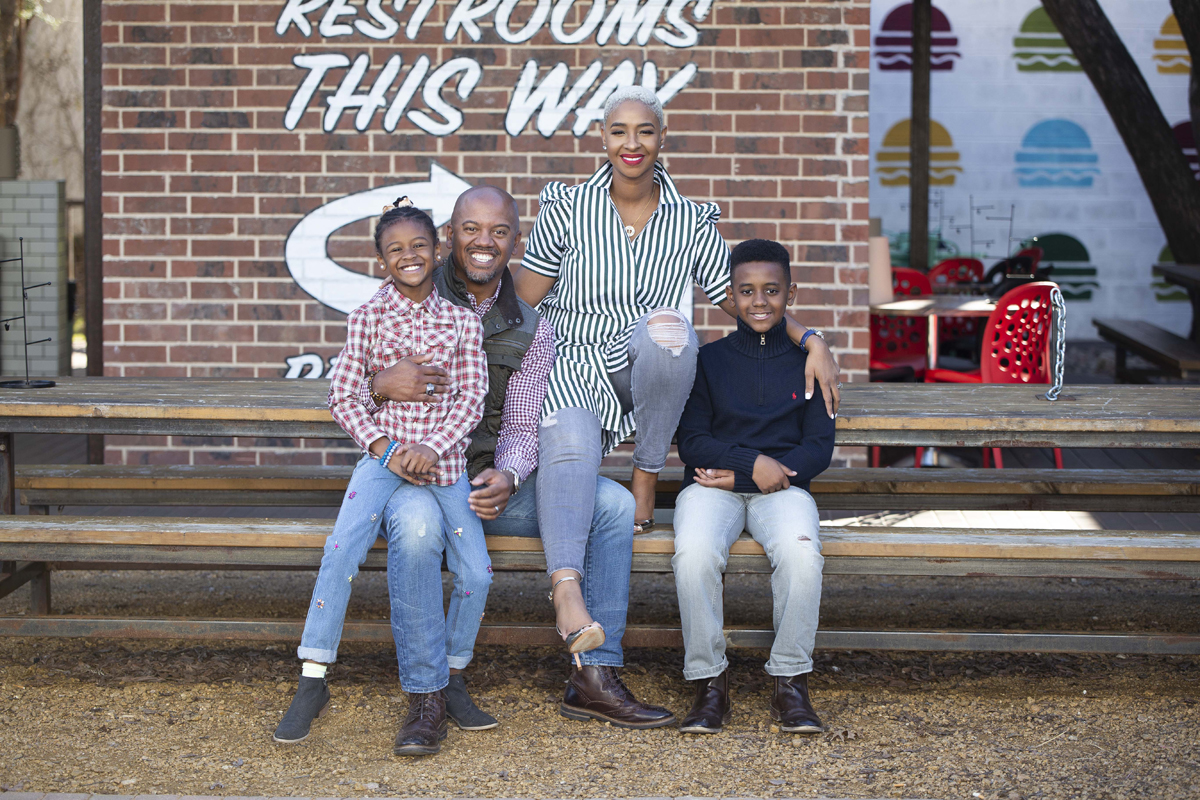 Getting a nod at the Grammys is something many musicians may not achieve over their entire careers—Toni Estes earned a nomination at age 21 for co-writing “It’s Not Right But It’s Okay” for Whitney Houston. Then Estes got a record deal of her own and some TV gigs before marriage and motherhood came calling. She believed she was done with the music industry; she wanted to be a stay-at-home mom.

GET TO KNOW TONI
HAILS FROM Tulsa, Oklahoma
LIVES IN Mansfield
SIGNIFICANT OTHER Johnny Collins II, husband of 14 years and owner of Community National Title
OFFSPRING Johnny Collins III, 10, and Justyn, 7
FUR BABY A golden doodle named Jagger
LATEST PROJECTS Before the Pop, a podcast about “the grimy stuff in the middle” of people’s paths to success; “Jealous,” a single from MyBlock Records
“ME” TIME RITUAL PJs, Netflix, closed blinds and nobody pestering her. “Every now and then my husband will book a hotel room and just send me for a staycation for one day—’cause he’s done it for two days before and I’m like, ‘OK, now I’m bored,’ so one day is good.”
FOLLOW HER toniestes.com; facebook.com/thetoniestes

But after moving to Mansfield and living the SAHM life for a couple of years, Estes was thirsty for a creative outlet, first pursuing portrait photography, for which she still takes the occasional client, and now a rebooted music career. She also has a YouTube Channel, a reality show on Facebook Watch, a newly launched podcast, a schedule of guest appearances on TV and radio, and a notebook full of other ideas.

Though the mom of two is, in her words, “not a great multitasker,” she’s figuring out how to make time for all her projects and redefining what “success” means for her now, as a creator and a mom.

“Although my daughter is 7, I think I’m just now getting my real legs back under me and really feeling like, ‘OK, I can do a little something,’” she says.

When you figure it out, let me know!

… because I saw that you released a new single. How’d it feel to be back in that world after so long?

It’s so different! I’ve had to kind of unteach myself certain things. But it’s refreshing to be back at my first love.

You said it was different—what kind of differences?

When I got into the music business, it was [an] exclusive club that you had to clamor and fight your way into. Now if you got a computer, and you’re a good (or think you’re a good) songwriter, you can put something together. There is some greatness in that because people used to be boxed out of the music industry.

But my first record deal, we’d come up with this whole album and then we’d take this one song and you would literally put, like, hundreds of thousands of dollars into this one song, not really knowing whether people are gonna like it or not. And now it’s just, we’ll put it out there. So I’ve had to stop obsessing over one song. That has been a process, but it’s a good change, I think.

Are your kids musical too?

They’re creative in two different ways. My daughter is me times one million—I can’t say I was ever a dancer, but she’s a dancer, singer. My son can sing, and he writes, but he’s more on the business side of things. I was asking him what he wanted for Christmas. “Well, I want a black suit.” Him and his friends have a business at school where they sell comics, so he was like, “I can do my deals better if I have on a black business suit.” I was like, “So you’re wearing it to school?” “Yep, I’m wearing it to school.”

Do they know your history, that you’ve been nominated for a Grammy?

Yes, and they think it’s so cool. I talk to my daughter a lot because if she sees something on TV, like another somebody singing, she’s like, “I want you to be on this TV show,” and I’m like, “Yeah, but you also want me to be at home every day, and you want me to come bring lunch every day.” She has me in a chokehold, which is a natural thing, but she doesn’t understand, like, “You want me to do that and this. You got to give me a little leeway.”

You’ve got your YouTubing, your photography, now you’re getting back into music. How do you find a balance between all that?

My personality is one that is all over the place. I have somebody come to my house that we sit down and do my calendar and say, “This is here, this is here, this is the only days you have open…” and I don’t feel as stressed out. I felt like life was living me, like I’m just chasing behind a car. So her coming to deal with my calendar has helped me tremendously. We do a carpool—my neighbors pick up the kids and drop them off [in the mornings]; I pick them up and drop them off in the evenings. And then in the mornings if I have a late-night recording, my husband pulls them together and gets them out the door, and then I do the nighttime stuff cause he’ll go to networking stuff in the evening. So we kind of just make it work.

Are you ever afraid that getting back into music will take you away from home more often?

Oh yeah, it’s a constant, constant thought. I was in L.A. recently having some meetings, and I had the thought, “So what do I do when they call and say, ‘Hey, we just need you to come and move out here for six months?’” It’s like, “Wait—timeout. I didn’t think about that part!” But I do feel good about the fact that I was able to spend the younger years [with the kids], where we have a good foundation for who I am in their life, and I can feel a little more comfortable because of that as opposed to leaving when they’re 2 months and 2 years.

You’ve reached somewhere a lot of people in the music industry could never even hope to get to. Do you ever feel like, “Oh no! Am I going to get there again?”

There were times where I felt like, “Man, I did that so early, I did that so young.” And so you go, “So what do you do now?” But now I’m just doing whatever I want. One of the things that’s great about being an independent artist is I get to do the music that I want to do. When you get so overwhelmed with creating for the monetization of it, it becomes redundant and not true and pure. So now my goal is to just be completely true to who I am and just say, “This is what I’m gonna record. If you like it, I’m happy. If you don’t, I’m happy.”

What do you hope your kids learn from watching you and your journey?

They’ve seen me evolve so much, and I hope they have—what’s the word I’m looking for?—the push-through, that even when it gets like, ugh, you can still keep going.

I want my daughter to know you can be a mom, a good mom, and do [other things too]. Before I had kids, I would hear moms say, “You know, I just lost myself.” And one day I just went like, “Oh, where have I been?” I was looking around going, “OK, these two kids belong to me, that’s my husband … when did that happen?” You figure out that you’ve been almost on autopilot, and you’re doing just enough of your thing to not feel like you’ve lost yourself. But then when you come to a little more, you go, “Yeah, no, I’ve lost myself completely.” You feel better when you’re walking in what you’re designed to do, so I feel good about waking up from that. I feel like I was asleep for a while.