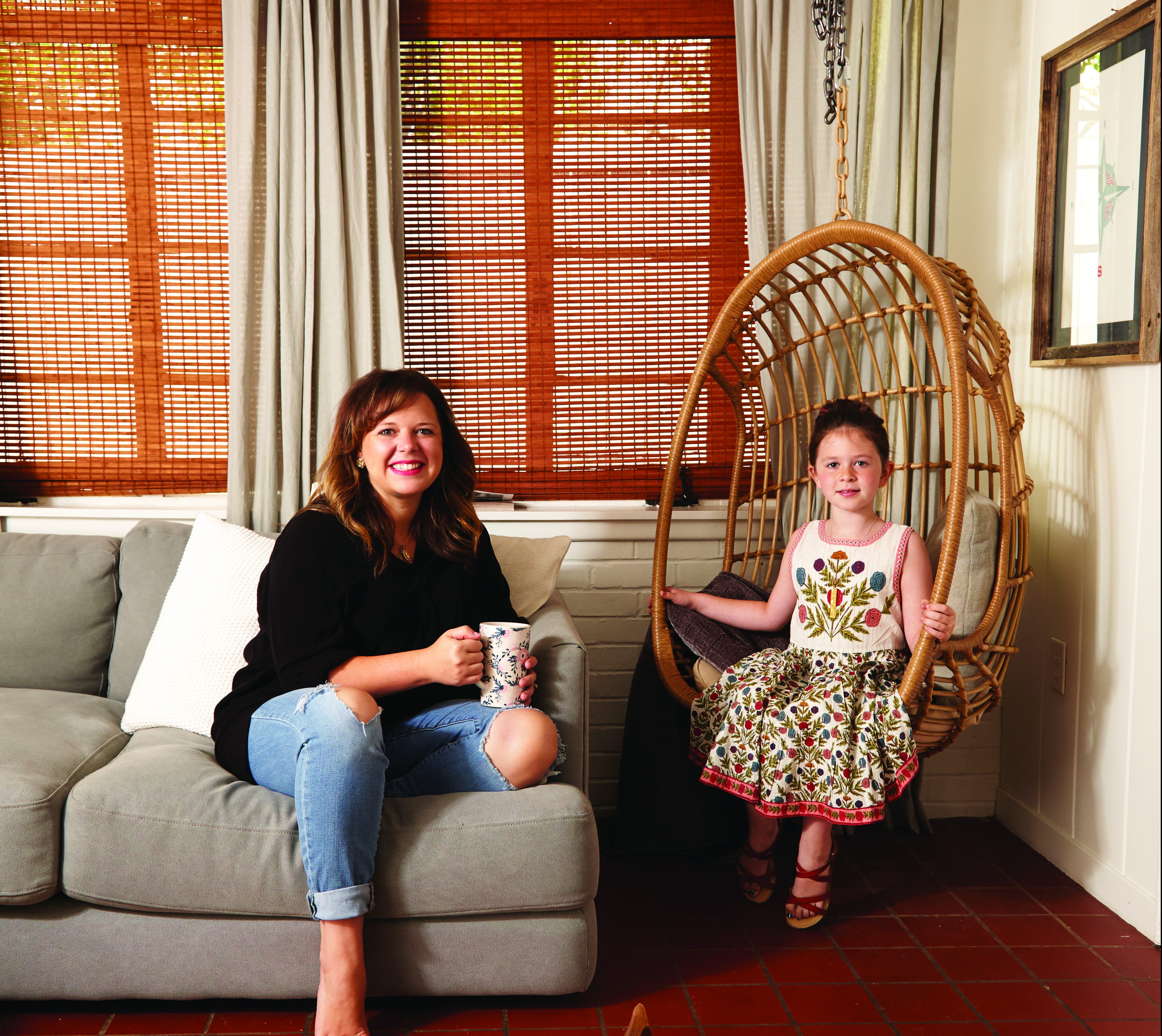 Lottie Fowler’s Fort Worth office of wedding design and planning firm Grit & Gold is part co-working space, part coffee shop. Its casualness is apt for the self-described nomad whose job frequently takes her out visiting venues and tasting cakes. The caffeine comes in handy too.

“At any given time, you’ve got 30 or 40 clients that are needing you,” she explains. “You’re always on call. I love it, but it takes a lot of energy.”

Someday, Fowler admits, she’ll probably scratch her next entrepreneurial itch; after all, she’s already hopped from corporate finance to event planning, with a brief side of vintage auto rentals. But for now Fowler is bringing her garden aesthetic to brides in Fort Worth, Dallas and Austin and designing her own daughter’s parties—in fact, we featured Saylor’s third birthday bash in these pages.

“This year she’s turning 9, and I don’t know when to stop,” Fowler muses. “At what age do you stop having the over-the-top home parties? When does it get cheesy? I don’t want to ever be that mom that’s just doing it to show off. When she says no, I’ll probably stop and find something else to do.”

Age 37
Hails from Dallas
Lives in A 1930s Cape Cod on Fort Worth’s west side
Alma maters West Mesquite High School and the University of North Texas
Significant other Clint, shop foreman at Cadillac of Arlington and husband of nearly 12 years. “When I met him, I was dating somebody, he was dating somebody… But about a year later we met again, and we were both single. Six weeks later he proposed.”
Children Daughter Saylor, 9
CV highlights Various corporate finance jobs; former co-owner (with Clint) of Bowtie Vintage Classics, a vintage car rental company; owner of Grit + Gold Weddings
Cruises in A 1966 Chevy Bel Air (“It’s all baby blue, interior and out—it’s beautiful”) and a 1973 Volkswagen Westy campervan
Why she loves Fort Worth “It’s so big but it has such a small-town feel. I’ll run into people like I’m in a little country town. We’ve got so much happening in this city, and I just love watching a lot of my friends start these businesses and become pillars of the community. It’s really cool.”
Follow her on Instagram @gritandgoldeventco and on Facebook

DFWChild: This seems like such a hard left from where you started your professional career. How did you end up here?
Lottie Fowler: Right out of college I went to work for GE. It was just the safe route, you know? It was that comfortable, climbing-the-corporate-ladder thing that you think you’re supposed to do. Then I started doing staff event planning for my bosses, so I learned how to do the budget planning and the logistical production of it. Then I personally got married, and I fell in love with the wedding planning because it was similar, but in a more creative outlet. It was like the two worlds collided for me, and I just loved it. I started doing weddings for friends and then finally created a business.

At 2012, I was really tired because at that point I had had Saylor, and I was trying to do this DIY planning company and be a mom and still working in finance. While everything was good, I felt a little lost, because I wasn’t ready to jump off that entrepreneur deep end yet. So I took a few months off [from planning], and I couldn’t stay away. A couple years later, I quit my corporate job, and I started to focus on Grit + Gold.

C: Do you ever look back at your wedding and think, Oh, I would have done this a little differently?
LF: Oh God, yes. All the time. We rode so many trends that you can really date our wedding. My husband wore Converse tennis shoes. Like, come on. It was too many kitschy things all in one bag. It was a mess. You live and learn. It was still very sweet.

C: Does Saylor ever help out with your work?
LF: She really likes what we call the assembly line work. I’ll have her tie napkins, fold paper, tie ribbons. We had a wedding in Austin, and it was right around Halloween. So instead of tying napkins, I was like, “Do you want to make 150 ghosts?” We turned it into a game and she really had a fun time with that.

She was just ride or die, all the time. But now she’s got her own opinion about things.

C: You’ve moved a few times. The house you’re in now—do you see yourself staying there for the long haul?
LF: Eh, I don’t know. We love historic homes. I wouldn’t say we’re flippers, but we definitely put our own touch on them, and then we get kind of bored. I really think that we’re at a place now that we’re comfortable. It’s such a special house that I want to take my time. But me and Clint are nomads at heart. I don’t see us being in a house for 15, 20 years—that’s just not who we are. But Say has tethered us down. She’s the one that keeps me grounded. We’ll be here at least through high school, and then we’ll see. Who knows? She might grow up and be just like me and decide to move abroad, and I might follow her.

C: Since you guys were last in the magazine, it’s been almost six years. How has parenting her changed in that time? What’s the challenge du jour?
LF: That 3 to 5—everybody says that that’s a difficult stage. Not for me. There was never any picky eating or making a comment about a menu. She was just ride or die, all the time. But now she’s got her own opinion about things. “I don’t want to do that, I want to do this…” I give and take, but I’m always telling her, “You get a lot of perks that a lot of other kids don’t because I have such a flexible job. But when my job calls for me to be on task, I need you to work with me.”

She has to come along with me for the business and learn how to be a little adult. She’s very seasoned for her age, and while she acts that way, I think sometimes she can miss just being crazy like every other kid. So I try to make it up to her, and we’ll take a day off and go do something fun. It’s always a balance, with any working mom.

C: Do you ever have any regret that you can’t spend more time with her, or that she can’t spend more time being crazy?
LF: Maybe for a heartbeat, but then it’s over, because I remember what it was like working my corporate job, running my business and trying to be a mom. She has so much more opportunity now, and she gets to see what it’s like to be a hardworking mom. She’ll say, “I want this,” and I’m like, “Well, own it. Go out and work for it.” I think there’s just something about having that dream that you go after, something that you built on your own. I’m trying to teach her that, and I think that’s something she’ll appreciate later in life.

There’s just so many things that I love, that I could see myself easily picking something else up that fills my heart in a different way.

C: Do you see yourself giving up wedding planning someday and chasing after a different venture?
LF: Probably. My dream is to grow this business, have it be successful and then sell it. There’s just so many things that I love, that I could see myself easily picking something else up that fills my heart in a different way. I get worried that I only have one lifetime and not enough time to do all the things. But I love gardening. I’d love to take classes and enjoy living a little slower.

C: What kind of future do you envision for Saylor?
LF: She’s wanted to be a baker for like four years now. She’s even drafted her own storefront. She says it’s going to be a bakery where there’ll be human treats and doggie treats and dogs are allowed to come inside. She’s definitely her mother’s child—she’s a little bit of a dreamer, head in the clouds. But I think that makes for the best kinds of people, you know? She’ll figure something out. It’s very exciting, watching your kid become their person.

This article was originally published in September 2019.