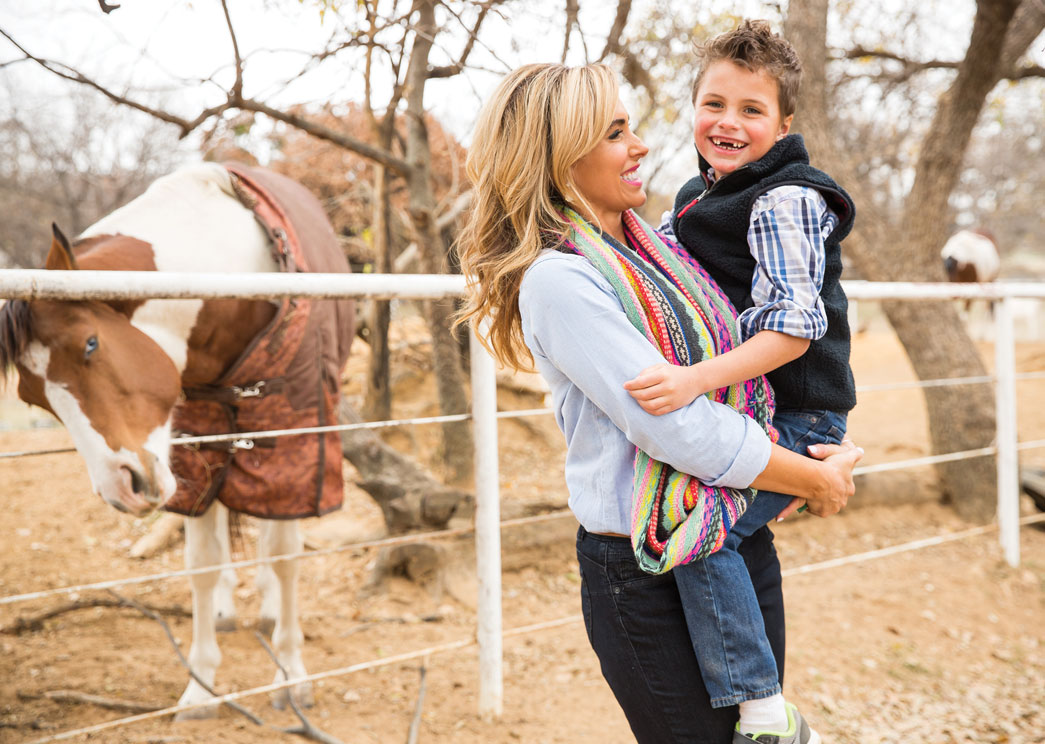 It’s Friday afternoon and Kate Cassidy just did something she never imagined doing: She brought home a bearded dragon and its lunch—live crickets and worms—at the behest of her kids. “Life’s a circus,” the Arlington mom says. “But a happy circus. I survive on happy chaos. There’s always something going on.”

Every day at 6:30am, the single mom wakes up in bed with her three kids—Kevin, 6; Don, 5; and Claire, 4—and the happy chaos ensues. Kevin, who has autism, begins his day at White Bridle Learning and Therapy in Keller, while the youngest head to a nearby Montessori school.

“I just needed more time for my children,” she says of deciding to launch her own business. “It’s been really fantastic to have the flexibility to drive them wherever they need to go and spend time with them during the day. I love the freedom of doing what I want when I want. It’s really lowered my stress level. I’m a better mom for it.”

Before striking out on her own, the Southern Methodist University law school alumna worked in legal counsel for the Dallas Stars and the Texas Rangers. It was a job she loved for more than a decade. But as her family grew, the 60-hour workweeks became unmanageable.

When Kevin began regressing at age 2—losing his speech and struggling with an increasing number of health issues—Cassidy’s stress level skyrocketed.

By the time Kevin was 2 1/2, the autism diagnosis was official, and so were diagnoses of an autoimmune and thyroid disorder. As the family traveled from coast to coast searching for answers, medical bills crept into six figures—and Cassidy’s  marriage began to crumble.

“It was a very difficult year and all the stresses very much led to our divorce,” says Cassidy, who now successfully co-parents with her exhusband. “I  got through that grieving process within a year or so and I’m in the loving and accepting stage now.”

It took time. Holding out hope that with the right treatment Kevin might recover from autism, Cassidy waited nearly three years before “going public” with his diagnosis.

“It can feel shameful at first,” she explains. “You don’t want to share that you’re not perfect, but I’ve gotten so much support and freedom from sharing our story. I don’t feel like I’m hiding our real life from the world anymore. It’s been incredibly freeing.”

Now, Kevin is thriving—in his own way. He’s still nonverbal. And he still faces health issues. But he’s happy. “He’s a great reminder that simple pleasures are the best,” says Cassidy. Seemingly little things like walks, swimming and jumping on a trampoline are great sources of joy.

To address Kevin’s food and environmental sensitivities, Cassidy did a complete overhaul of the way her family eats and lives. She installed water and air filtration systems and hired a chef to specially prepare organic, gluten-free meals for Kevin. Everything in the house is nontoxic, even the lawn fertilizer they use.

“I wish I had implemented all that  before I got pregnant, and who knows, maybe it would have helped his health  problems. I’ve learned so much about being  a healthy person.”

She’s learned a lot about being a healthier person mentally, too. Last year, the pressure of being a single mom of three and growing a brand-new business became too much. Despite the newfound flexibility of being her own boss, Cassidy was more stressed than ever, experiencing physical manifestations like chest pain.

“I knew I needed to do something,” she says. “So I started doing more yoga and meditation, which has helped hugely.”

Cassidy honed her meditation practice at a pricey transcendental meditation course in Santa Fe, but now she relies on the $10 app Headspace. She likes to think of meditation as “a bath for the mind” and dedicates 10 minutes twice a day to her practice.

“You can’t feel guilty about taking an hour to take care of yourself because you’re a better mom the other 23 hours you’re with your children,” she asserts. “Self-care is so important. I’m finally doing a good job at it, and I’m a better mom because of it.”

Today, Cassidy describes herself as “happy, balanced and in control.” In addition to self-care, she’s realized the importance of a solid support system.

To help navigate life as a special needs parent, Cassidy relies on a network of moms she connected with through Facebook. She donates time and money to various autism organizations, from Talk About Curing Autism (TACA), a nonprofit dedicated to educating and supporting families affected by autism, to Dream Park, a Fort Worth playground for children of all abilities.

Giving back is a nonnegotiable for Cassidy. In fact, 10 percent of her company’s gross revenue goes directly to charity.

“I’m doing well, and I like to share with others that are in need, especially in the autism community,” she says. “Ultimately, I’d like to establish a charity that gives free care to autism families. Everyone needs a break.”

It’s just one of many things Cassidy would like to accomplish. When talking about the future, she’s optimistic. Her business is thriving, and she’s excited to see where it goes. She’s dating and has dreams of buying land with room for Kevin to live independently as an adult. She’s passionate about continuing to give back to the autism community she once hesitated to identify with.

“I used to be pretty rigid and things had to be perfect. That’s absolutely impossible in my current life. I’m much more empathetic and accepting. I’m just enjoying things as they come.”