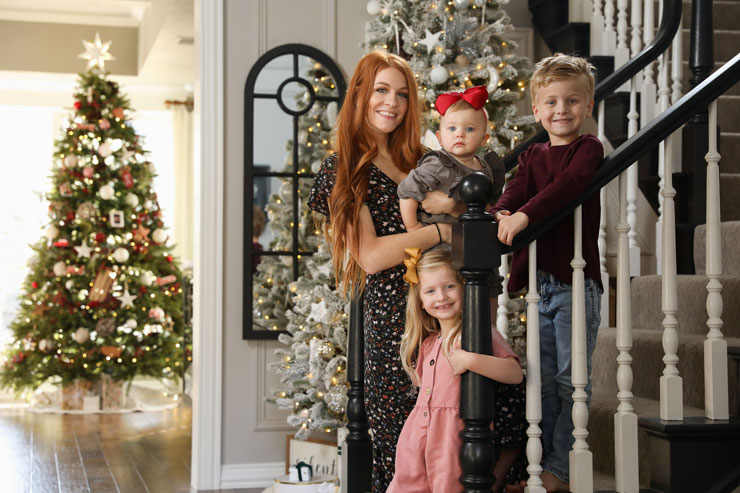 If you’ve ever caught one of Jennifer Todryk’s stories on Instagram, under the moniker of the Rambling Redhead, you know that her quirky, honest take on raising three young kids, marriage, fashion, home decorating and even Instagram itself hits a major cord with her many followers:
“Such a real post. This is why we love you.”
“You are one of my absolute favorite accounts.”
“Y’all are forever my favorite. Thank you for always sharing these. They make me laugh so dang hard.”

Her trademark beautiful red hair is not the only thing that sets her apart from the countless other moms on Instagram. She’s gone from 50,000 followers to 424,000 followers (and counting) in less than a year, and with an HGTV show filmed and ready to premiere in 2020, it seems like this is just beginning for Todryk. “She’s the perfect combination of Lucille Ball and Joanna Gaines in one person,” her husband Mike says. “She’s funny, witty and has got physical comedy. She’s great with timing. She’s intuitively good at business, and like Joanna, she’s just got an impeccable eye.”

About the Rambling Redhead

Age 31
Hails from Burleson
Lives in Collin County
Significant other Husband Mike, regional sales director and army veteran
Children Von, 6, Berkley, 4, and Vivienne, 1
Recent activity Interviewing the cast of Frozen II at the Los Angeles red carpet premiere and filming a pilot for HGTV set to premiere in 2020
Alma mater Tarleton State University for fashion merchandising
Dream job as a kid “Probably an actress. I look at it now, and it’s not the same. Something in the arts was my dream.”
Where you can find her lifeasaramblingredhead.com and at Armor Coffee in Allen, which she and Mike own

DFWChild: Why did you start your blog?
Jennifer Todryk: The blog started because I was just kind of in a funk, a low point. I had just had Berkley, and the transition to two kids was so tough for me—way tougher than three. I had no identity. I was a workaholic and I would bring my work home, and I really found joy in presenting and making stuff, trying to hustle and be the best at whatever job title I had. [As a mom of two] I needed an outlet and to create something, even if only my mom and my dad were going to read it. It didn’t matter. It was just spending the hours and the time using my mind for something that was fun.

C: And then you went viral.
JT: Yeah, I had a post go viral my fifth week of blogging and just got really lucky. I remember when I went viral—I restarted my computer because I thought there was a glitch in my AdSense counter. I was so naïve. I will say I’ve been very fortunate in how fast that I have grown on my platforms. It definitely has given me a sense that I’m supposed to be here, like God wants me to do this, and I keep that in my mind, as far as my message I send out, the light that I shed, as far as being positive. I believe if you are you and you do you, you’ll find your people, and those are the best people to have because they’ll show up for you.

C: Why do you feel like you resonate with people so much?
JT: I’m weird. I do little skits and stuff. Most people, when they make a profile in their home decor or fashion, or whatever, you stay in your lane. That’s what you do. I didn’t know what I wanted to do, and that’s why my blog was called Life as a Rambling Redhead. It’s funny—I originally wanted to do a home decorating blog. That’s what I was going to do, but I didn’t have any home decorating to talk about, so I did a post called “I, Mother of Baby Terrorists,” and that one did really good, and so I wrote a second funny one, and that one did really good. So I’m so glad I did Life as a Rambling Redhead because even though it’s obnoxiously long, and now, I’m just pretty much the Rambling Redhead on everything, it’s just all my life.

C: Tell me about your upcoming HGTV Show. How did that happen?
JT: Last spring, [in] 2018, I had a production company reach out to me on Instagram and I was really excited, but they wanted me to shoot some video for them, and basically, it was going to be me and a friend doing home decorating. But the problem was they wanted us to film us working with clients. So me and my friend were going to decorate homes. We even went out and got an estimate of someone’s house and did a whole consultation. Then I get pregnant, and I’m like, This just isn’t meant to be. I’m creating a business that I’m not even doing, technically, which didn’t seem authentic to me. I told my friend, “I’m so sorry, but I can’t do it.”

One month later, I get an email from another production company. I’m like, What is happening?! So, I’m like, OK, fine. I’ll jump on a phone call, even though I knew I wasn’t going to do it. I just got pregnant. So, I talked to them and they were so easy. They were like, “No, we’ll do everything. We just need you. You like to renovate homes. We’ve seen your Instagram. We’ve seen you in your stories. We would love to make a show around you. We’ll find the homes. We find the clients. You literally show up. You’re just doing the renovation and we’re going to help you along the way.” They came out to my house and shot right after that. It was from the very beginning quick, easy, painless. I just felt like God made it too easy. He was like, “Here, dummy. I’m trying to get your attention.” It was a sign, and I did it, and it’s been great.

C: What was the craziest part about filming the TV show?
JT: The kids. Having to worry about the kids, managing the kids. The way you film it, you have to remember, OK, this scene, we had already done this, but we hadn’t done this yet. You film out of order. That’s how they’re all filmed. In the back of my head, I’m like, I hope Mike remembered that he’s supposed to leave at this time. Is he running late? Is he talking too much? You still are a mom and you’re still worried about everybody else, even though you don’t need to be. But that doesn’t shut off because your husband’s got it. It doesn’t shut off. You’re still always concerned about everybody’s wellbeing, and that drives you up a wall, and I had to think many times, Shut it off. It’s going to be alright.

C: What is your best advice for parenting?
JT: Have fun with it. I really do feel like happiness is a lot of choice and that you can choose to be happy. Find the joy.

C: What was behind your decision to homeschool your son?
JT: We homeschool half time. Von’s really smart, so because of that, it just felt weird for him to go to kindergarten. He’s been reading since he was 2 1/2. He read before he could talk. I taught him to talk by taping up sight words on the wall and being like, “Which one says ‘can’?” And he’d point to “can.” I’d be like, “Say ‘can.’” He’d be like, “Ca.” I’m like, This makes absolutely no sense. I didn’t register as him being super intelligent back then. He was my first. I didn’t know. I was just in my own little bubble. He’d walk down the stairs in the morning and be like, “Mom, what’s the climate in Africa right now?” I’d be like, “What are you talking about?” He’s like, “Is it humid? Is it like 96 degrees?” I’m like, “I don’t know.”

He has [school] three days a week, and then he is [homeschooled] here two days a week, and I’m able to incorporate stuff that’s on his level. He does multiplication, division since he was in kindergarten, but we’ve stopped. I’m like, “I’m not doing algebra with you. You just turned 6.”

This interview was originally published in December 2019.