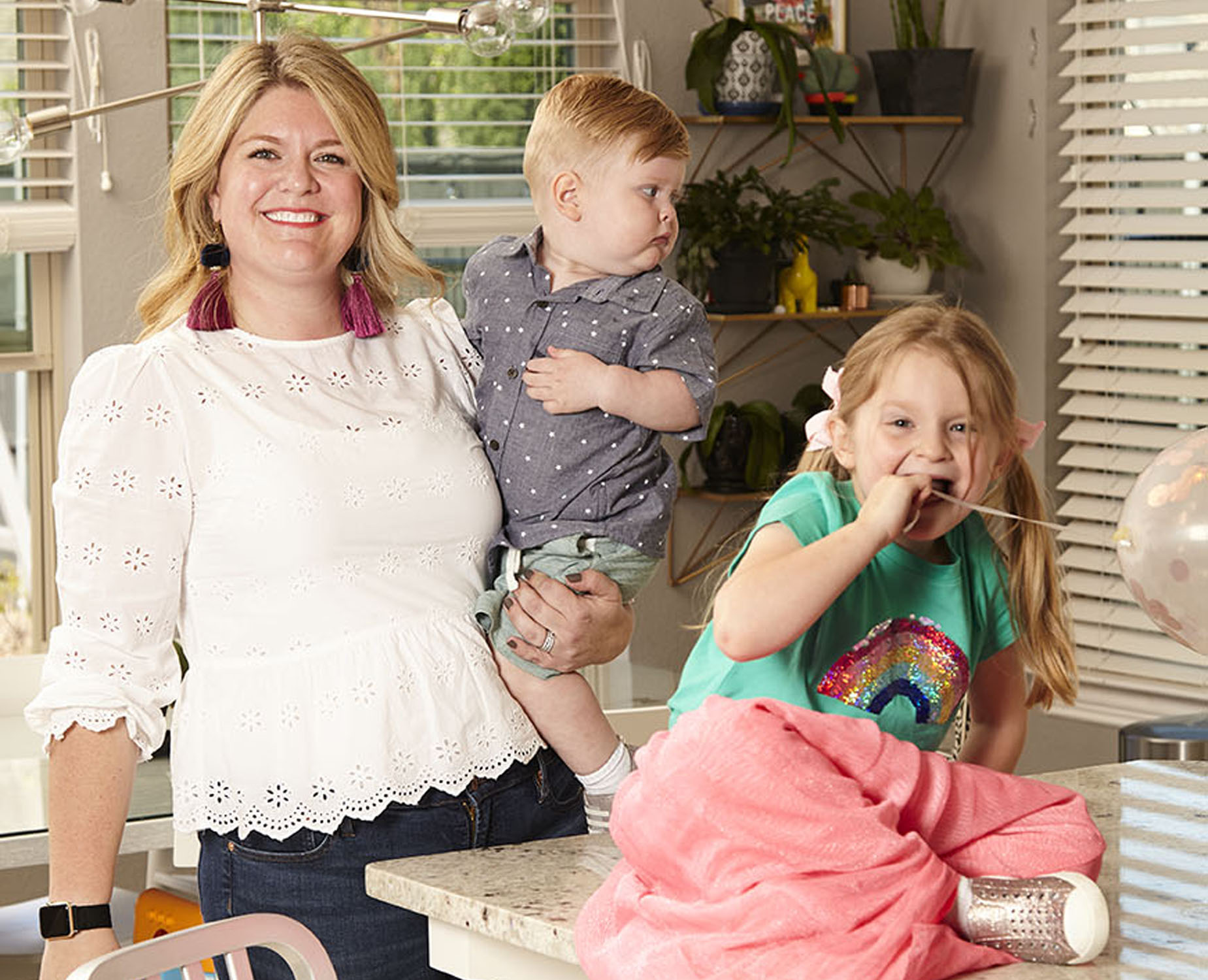 “Never a dull moment.” Heather Vance Devers repeats the mantra with a laugh as she describes the trials and tribulations of raising two kids. “They’re just both at such wild ages,” she says. “It’s fun and terrifying and exhausting all at the same time.”

The Frisco mom is unflinchingly honest about parenting’s ups and downs, and adamant about sharing what’s real, not just what’s “pretty”—a refreshing take from a former stylist and editor for the likes of Neiman Marcus and D Weddings.

As the daughter of Susan Ford and granddaughter of former President Gerald Ford, Devers knows what it’s like to deal with preconceptions about who she is. For the first few years of motherhood, she says she felt constrained by expectations of what a mom is supposed to look and dress like. Now she feels comfortable expressing her multifaceted identity. “I’m also a human—I just want to feel good in the way that I dress,” she says. “You can be a stylish woman and a mom all at the same time.”

Age 36
Hails from All over, but spent much of her childhood in Tulsa, Oklahoma
Lives in Frisco
Significant other Jeff, her husband of 10 years. “We love live music—that’s the thing that we bonded over when we first started dating. We go to concerts and listen for new bands and have a record collection.”
Offspring Betty, 5, and Jude, 18 months
Alma mater Southern Methodist University
CV highlights Senior stylist, Neiman Marcus Online; style director, JCPenney; managing editor, D Custom
Family tree highlights Former President Gerald Ford and First Lady Betty Ford, Devers’ grandparents. “I remember thinking that everybody’s grandparents had secret service agents, and everybody’s grandparents were on TV.”
Future plans “I really want to get involved with the Betty Ford Center. It’s a major part of my heart because I have a lot of people in my life who’ve dealt with addiction, and I’ve seen the way that it can destroy families.”

She’s also feeling ready to get back to the work she loves. Before getting pregnant with her second, she stepped back to focus on her family.

“Prior to now I’ve looked at going back full-time and it scared me,” Devers reveals. “But for the first time I feel like I’m ready for it. I’ll still be in their lives—just in a different capacity. I feel like it’s time to get back to what my first passion was, which was work, and see what that looks like.”

Child: Do you miss the editorial world? Heather Vance Devers: Yeah, I do. I feel like moms need a support that a lot of people don’t have. Or all the things that just are not discussed—you’re like, “Why is nobody talking about this?”

Child: Can you give me an example? HVD: The transition from one [kid] to two. They say one is one and two is 20, but what does that mean? For that first year you’re probably not going to sleep. And you thought that first baby was hard, but now try showering once a week. I was a deer in the headlights. Now that he’s 18 months and a little bit more independent, I feel like I’m starting to get my groove back.

Child: People know who your grandparents are, they know about your family. Do you ever have a conflict with that? HVD: Up here nobody knows who my family is. I don’t have the last name. But I met my husband on Match.com because I was tired of meeting people the typical way, where I walked into a room and people already knew about me. It’s a tricky balance because I want to carry on their legacy. Both my grandparents were not just publicly amazing people but amazing grandparents and amazing humans.

Child: Do you have any other inspirations, in your family or otherwise? HVD: Moms who are out there doing their best but also being really real about it—that it’s not rainbows and unicorns. Everybody poses these perfect pictures of reality, and you’re like, “That’s not real. And if it is, do you have 15 nannies?” Anybody who’s out there empowering other moms, empowering other women and helping people feel not so isolated in motherhood is really who I look up to.

Child: Do you wrestle with that yourself as you post things on Instagram? HVD: Yes. You want to show all these beautiful moments with your kids, but I also like to show the real moments. Like my daughter’s 6-month-old photo shoot. We did all these beautiful pictures, but then the photographer got this awesome picture of her just mid-meltdown, and I was like, “If you’re gonna show the pretty, you have to show the real too.”

Child: In the fashion world, I’m seeing a little bit of pushback against that perfect vision. Are you seeing that too? HVD: I remember the standards that I used to have to go up against for these teeny-tiny [models]. Now on websites that I look at, they have real women with real curves and real looks, and you’re seeing more diversity as far as skin color. There’s much more inclusion, which I’m super happy about. It’s interesting, because I’m seeing the pushback through the fashion industry, but some of these Instagram models are just a whole different level. So I’m hoping that once the fashion industry goes that way, those girls will follow.

Child: Are you scared for your daughter having to face that pressure? HVD: Oh, absolutely. I’m very aware of the way that she perceives her body. I read fashion magazines, I watch TV shows with a lot of glamorous people, and I try not to expose her to that stuff too much. Even if I feel like she’s not reading it or looking at it, she’s still absorbing it. I want her to see that there are hundreds and thousands of different classifications of beauty.

Child: Do you think about it with your son too? HVD: It’s different, but I am really aware of the way that I raise him to make sure that he’s respectful to women. I want him to see that his sister is an emotional person and he can be an emotional person. There’s definitely going to be two different ways that I raise them but with the same theme of self-acceptance and acceptance of others.

Child: Your husband travels a lot. How do you deal when he’s out of town? HVD: My mom lives here, which helps. And I just rely on a network of people. There are nights that he’s not home and it’s bath night and two kids are cranky at 7 o’clock at night, and it’s exhausting on a level that I never knew I could be exhausted on. But if I can get them to bedtime in a quiet, calm way, then I will have felt like I won the day.

Child: Having been exposed to the spotlight, is that something you would embrace for your kids if they decided to go down the political route? HVD: Oh, gosh … I want them to do whatever they want to do, so if they chose to be political I would support them in that. As I grow older I see even more and more the impact that my grandmother had on breast cancer awareness and drug and alcohol addiction, things my grandfather did for our country. Even though I didn’t choose that, I want to support people who do. So if that’s my kid, then great.

Child: How do you want them to see you? HVD: That’s something that I have been thinking about, because my daughter only knows me as a mom. I want her to see a woman who can do what she wants and is not necessarily held back by stereotypes of what a 36-year-old woman is supposed to look like, be, do—whatever. If I go back to work I want her to see that I can be a mom and a working woman. With my son I want to show him that strong women are not something to be scared of.

Child: What’s the most rewarding thing about parenting so far? HVD: Seeing them out in the world being good people. Last week at my daughter’s birthday party, she made sure that all of her friends who weren’t from her school were introduced to her friends from school, and she walked around and asked if everybody was OK. I’m not a very good hostess, so I don’t know where she got that from. It’s just those little nuggets where you see that all the work and hours that you’re putting in are actually paying off.