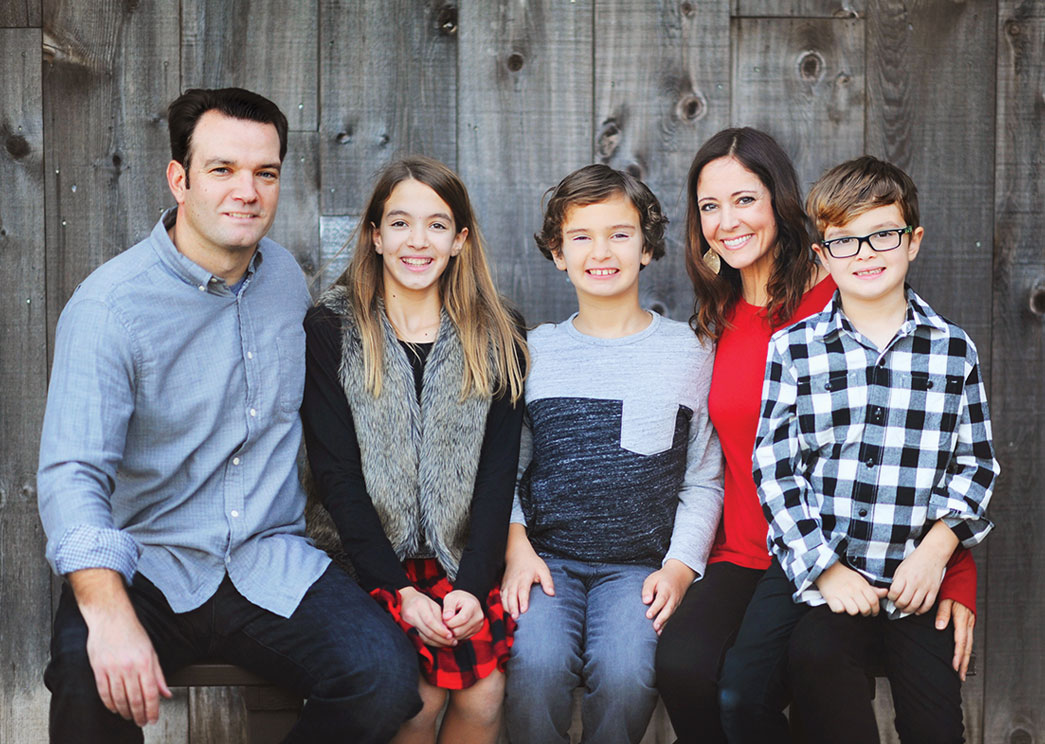 At least five days a week, Erika Slater takes her body to the brink, running, riding and swimming in preparation for whatever race she has lined up next.

Since 2002, she’s completed numerous half-marathons and sprint triathlons and achieved her goal of completing five half distance triathlons before turning 40 last year. (She finished six.)

“Training is my meditation time,” says the Coppell mom of three: Paige, 11; Hunter, 9; and Peyton, 6. “I come back fresh and reenergized. It gives me the endorphins I need.”

To Slater, training is much more than a coping mechanism. She views it as an analogy to Hunter’s journey with autoimmune disease and autism. If he can persist so can she.

“Everything takes extra effort for him,” Slater says. “He has to fight through every day to try to retain some type of normalcy, just like I have to push during a race.”

Hunter was 9 pounds, 12 ounces at birth and healthy in every way. His pediatrician called him “perfect.” But on Thanksgiving 2010 during a family trip to Wisconsin, things took a turn.

At first, it seemed innocuous enough. Doctors diagnosed Hunter, 17 months at the time, and his sister Paige with an infection, assumed to be strep throat. While Paige improved, Hunter’s fever persisted and he developed a full-body rash. Thinking it was an allergic reaction to antibiotics, the doctor prescribed prednisone. But Slater’s intuition—as a mom and a speech-language pathologist—told her something was amiss.

Following a horrific flight home with Hunter screaming in discomfort the final 30 minutes, the toddler woke up with an eyeblinking tic. This is when Slater and her husband, Peter, began to search for answers.

“I remember screaming in my head, ‘Autism? He definitely doesn’t have autism!’” Slater says. “He never lost his language.”

But he developed issues with his fine motor skills and social skills, and his sensory integration regressed. He began to walk on his toes, express sensitivity to loud noises and flap his arms.

After his three-year checkup, he was diagnosed with pervasive developmental disorder – not otherwise specified (PDD-NOS), which falls under the umbrella of autism spectrum disorder (ASD).

“I knew what they were going to say, but it never quite prepared me,” Slater says. “You receive this diagnosis, and then you’re left to pick up the pieces. Why us? Why, when someone does everything right and follows every baby book, does this happen?”

While Slater ensured that Hunter received every behavioral intervention available, there was still the matter of his medical issues. From recurring strep throat and ear infections to wheat gluten intolerance and vitiligo,
autoimmune reactions waged war on the boy’s body.

Finally, when Hunter was 5, Dr. Benjamin Greenberg, a neuroimmunologist at the University of Texas Southwestern Medical Center, diagnosed him with autoimmune encephalitis, a neuropsychiatric disorder in which the immune system attacks the brain. For Slater, it was like crossing the finish line at a race. She finally had an answer.

In the years since, Hunter’s care has included behavioral therapy, hippotherapy, occupational therapy and a strict gluten-, dairy- and artificial color-free diet. To manage the autoimmune disease, he takes daily supplements and receives quarterly immune treatments at Children’s Health. Cognitively, he’s thriving. Though there are occasional setbacks, he’s in school full time and on grade level with an average IQ.

“I feel like, with Hunter, recovery [from autism and autoimmune encephalitis disease] is possible,” Slater says. “Some people raise their eyebrows when I say that, but the definition of recovery is ‘to regain something that has been lost or stolen.’ I feel like normalcy was stolen from us. We have a new normal now. Every day we compete with autoimmune disease.”

For Slater and her husband, the director of customer strategy for Metro PCS, this new normal involves long days and a lot of teamwork. The couple prioritizes date night and recently started taking an annual trip. Most important, each one gives the other space to cope in his or her own way.

“We’ve both accepted the fact that grieving takes time and know what the other needs,” she says. “We try to help one another get that mental break.”

Time is a rare commodity for Slater, who works part time for a home-health agency. But with her husband’s help and a flexible work schedule, she’s able to meet Hunter’s needs, as well as those of Paige and Peyton.

It’s a delicate balance for Slater, who’s had to train herself to take the “therapist hat” off when she’s with Hunter.

Long before having children of her own, she had a heart for children with special needs. Her desire to “make a difference” drove her to pursue a career in speech-language pathology, in which she’s helped families for more than 15 years.

Becoming the parent of a child with special needs, however, was a game-changer. Today, she’s “a completely different therapist”—and person, for that matter. From feeling the sucker punch of a diagnosis to enduring judgmental glares at the grocery store, she knows what it’s like to be on the receiving end.

“I’ve always been a compassionate person,” she says. “But now, in my mind, everybody gets the benefit of the doubt. I wish people would give everybody a little grace.”

Wanting to do even more, in 2015 Slater co-founded Competing for Recovery, a nonprofit that connects area families and raises awareness of autoimmune diseases. In its three years, the organization’s tentpole event, an annual 5K run in Coppell, has raised more than $30,000 for the UT Southwestern research group CONQUER (Collaboration On Neuroimmunology: Question, Understand, Educate, Restore) and Children’s Alopecia Project.

“Watching those people cross the finish line that first year, my heart healed in so many ways,” says Slater. “It’s so rewarding. It helps kids accept one another and helps parents who are lost.”

When other parents reach out for words of comfort, Slater returns to the race analogy, urging them to continue putting one foot in front of the other, even when they’re running on empty.

“Grief is a big part of receiving that diagnosis, and it never leaves you,” she says. “It just comes in waves. You have to persevere— not just for your child but for your marriage, insurance battles and doctors’ appointments. In the beginning, everything I did focused on trying to figure out why. Now that I’ve stopped trying to get that why, it’s clearer for me. The why is not going to change how life is. This is the new normal.”