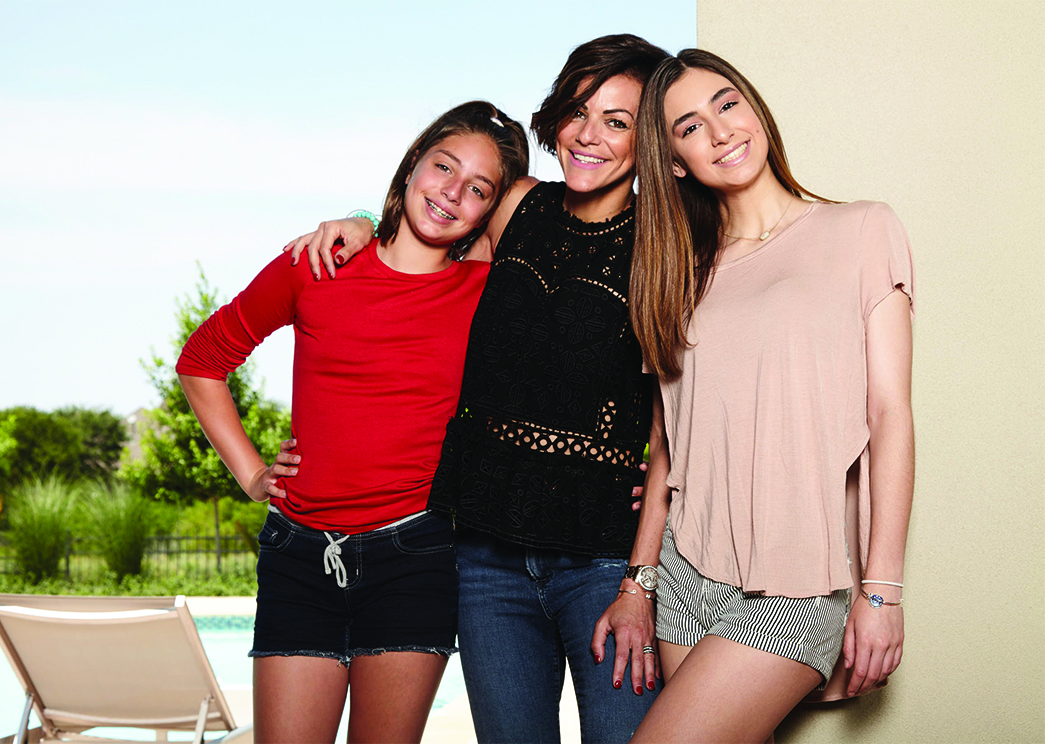 Danielle Natoni of Frisco isn’t one to sit idle, literally or otherwise. She’s constantly moving to make herself better, always striving to be the best version of herself possible.

“Complacency isn’t in my vocabulary,” says the 39-year-old mom of two: Adrianna, 17, and Bianca, who is 12 and has Tourette’s syndrome. “Feeling comfortable is never going to be something I do.”

In 2010, Natoni spun her passion for self-improvement into a second career. A longtime teacher in search of another stream of income, she discovered Beachbody, the multilevel marketing corporation behind P90X, Shakeology, et al. She sawan opportunity to help other women through health and fitness, and seized it. Now she trains other fitness instructors, creates workout videos and helps trainers build their online presence, among other activities.

She’s also been lucky in love, which was something she didn’t expect. She met Darren Natoni—a fellow Beachbody consultant and her other half in the Body Chemistry program—and married him in 2015. Darren quickly settled into the role of businesspartner and “bonus dad.” (Natoni co-parents with her ex-husband, Adrianna and Bianca’s father.)

At a glance, things look picture perfect these days. But Natoni is candid about the difficulties she faced getting here.

“I’ve been through it all,” she says. “Sometimes it’s easy to look at an attractive, fit woman and think it’s always been easy. But I’ve been at rock-bottom debt. I’ve gone through divorce. I’ve been the underdog.”

She’s also been through the challenges of raising a child with special needs. Bianca was 7 when she began blinking uncontrollably and shrugging her shoulders like clockwork. Natoni did her research and deduced the cause to be Tourette’s syndrome, but it was three years before a neurologist confirmed with an official diagnosis.

“Hers is extremely mild compared to most people,” explains Natoni. With effort, Bianca is able to mostly contain her tics during the school day and when she’s doing something she loves, but they become pronounced when she’stired. Still, despite her tics, Bianca is thriving in school and socially confident. She plays volleyball and was recently named a youth ambassador for Tourette Association of America. Last fall, she made an appearance on The Doctors talk show to tell her story.

Odd as it may sound, Natoni sees the diagnosis as a blessing of sorts, something that will shape Bianca into a stronger, more compassionate person.

Early on, Natoni made the decision to manage her daughter’s symptoms holistically.

“It wasn’t a difficult decision,” she says. “We live a very holistic life to begin with. I believe most things tend to be bettered through food, movement and sleep.”

The family limits processed, high-sugar foods and chemicals. Natoni says that when Bianca’s tics worsen, they’re usually able to pinpoint something in her diet that’s off. And activity isn’t just encouraged but required—the more Bianca moves, the milder her tics seem to be. Natoni is careful to state that she in no way seeks to deride traditional medicine or villainize those who choose it. But for Bianca’s specific case, she felt the natural choice was best.

“In order to raise empowering women, I have to be an empowered woman myself. The only way to do that is to lead by example.”

In fact, Natoni has always been passionate about health. Long before Beachbody was even in her vernacular, she was a dancer. She danced throughout school and competitively as an adult before becoming pregnant with Adrianna. Though dancing was sidelined when she became a mom at 22, she became more focused than ever on nutrition.

She resolved not to become “that mom, who has a baby and becomes unhealthy,” and never looked back. At 39, she says that she’s aging in reverse, getting healthier as she gets older.

And she says it without an ounce of arrogance. It’s a simple matter of fact. She shares her story daily through her businesses, speaking engagements and social media platforms. A book is in the works.

Ultimately, her goal is simple: to use her experiences to empower other women to take control of their health too and to learn how to put themselves first.

To ensure she’s giving her loved ones her best, Natoni prioritizes her marriage and “me time.” Naturally,working out is an outlet. But she also enjoys the rare reality TV binge or mani-pedi.

Beyond fitness and nutrition, she and Darren seek to live well by abiding by a trio of family values: Always do the right thing. Take extreme ownership in all you do. And the only way to fail in life is to settle for less than you’re capable of achieving.

For Natoni, doing her best is nonnegotiable—and not to be confused with doing it all.

“All we can do is our best in our role at the moment,” she says, referencing Year of Yes by Shonda Rhimes. “My life will never be in perfect balance.”

As her girls get busier, family time is increasingly rare. But when it does happen, they enjoy a family game night. With Adrianna nearing college, Natoni has normal misgivings. But mostly she’s just excited to watch her daughter come into her own.

However focused she is on empowering women across the globe, Natoni’s top priority is to empower the two young women living in her own home.

“I want my girls to know that they can do and be anything they want to be,” she says. “In order to raise empowering women, I have to be an empowered woman myself. The only way to do that is to lead by example.”