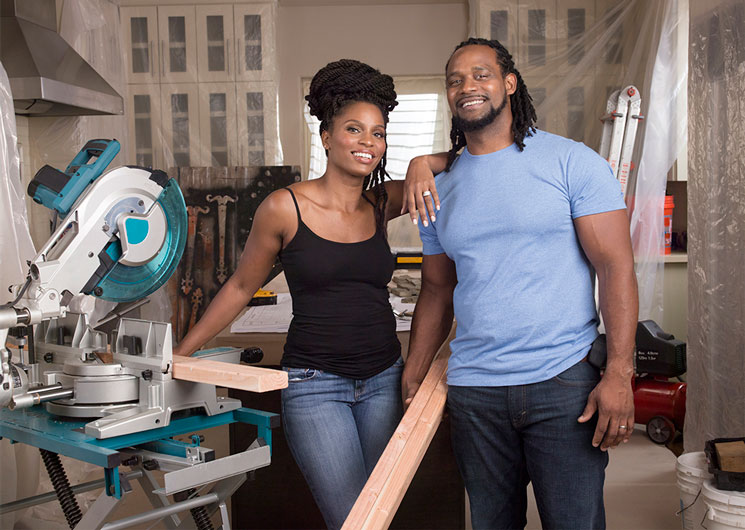 Ashley Williams and her husband of nine years, Andy, live each day hyper focused on the mission at hand: Integrating veterans back into civilian life by way of their Fort Worth–based real estate company, Recon Realty. More than a mission, it’s a passion project for Ashley and Andy, who are both military veterans themselves—the couple first met in Iraq.

When they moved back to the States in 2012, Ashley had a difficult time making the transition. Then real estate came knocking. Andy had a growing portfolio of rental properties. Ashley discovered her talent for design, and the couple began flipping.

In the years since, they’ve spun Recon Realty into a profitable venture that pays the bills and, more to their point, helps fellow veterans find success in civilian life. The couple sees themselves as mentors of sort, training fellow vets and partnering with veteran-owned small businesses.

Ashley and Andy added to their A-team with kids Ashton and Amina, and in a serendipitous turn of events, landed the HGTV series Flip or Flop Fort Worth. But despite their crowded schedule, they haven’t lost sight of the goal–changing local communities for the better, one veteran at a time. “People feel your passion,” says Ashley. “It can’t be faked. It exudes out of you. That’s how this all came about.”

Age 32
Hails from Chicago
Lives in Fort Worth
Significant other Andy Williams, U.S. Marine Corps veteran, co-host of Flip or Flop Fort Worth and founder of Recon Realty
How they met In a gym on deployment in Baghdad
Children Ashton, 6, and Amina, 5
CV highlight United States Army veteran

DFWChild: What was the catalyst for your mission to empower veterans through real estate?
Ashley Williams: I was a transitioning veteran who had a hard time reintegrating into civilian life. We thought, “Who better to help begin that transition than someone who has actually experienced it?” It came from a need to figure out what to do when I got out of the military. We also needed a way to provide for our family so Andy didn’t have to go back overseas and work. Once we started having kids, I didn’t want them to have a Skype relationship [with Andy]. It developed from our needs.

C: How did Flip or Flop Fort Worth come to be?
AW: It was happenstance. We didn’t go out for a casting. We were on vacation talking with someone and didn’t know, at the time, that he was a producer. Andy was talking about our passion for working with veterans. [The producer] took an interest, and a month or so later said he was thinking about pitching a show.

C: Was it a difficult decision to move forward with the show? Were you nervous?
AW: Definitely. We were fairly private people, and I was very tentative about showing the kids. You’re opening yourself up to scrutiny. But you’re also showing others that normal people can do this. You have the opportunity to take control of your future. Andy asked early on, “Is this really something you want to do?” I told him, “If it helps with the mission, let’s do it.”

C: How have your lives changed since the show debuted?
AW: Well, it’s definitely a lot busier. Veterans everywhere are reaching out. The veteran interaction has been the biggest change. We were doing everything on a smaller scale before the show.

C: Have the kids picked up on the changes?
AW: The good thing about kids is that they’re so resilient. They only see us as Mommy and Daddy. We put the show on and they’re like, “Oh look, there’s Mommy on TV. I want to watch Ninja Turtles now.” It’s their normalcy.

C: What’s it like working together?
AW: Early on, we didn’t really know our places and what our strengths were. But now everything runs pretty smoothly. I have my spot, he has his spot and he lets me do what I need to do. You have to work off of each other’s strengths. You’re going home with that person at night.

“We put the show on and they’re like, ‘Oh look, there’s Mommy on TV. I want to watch Ninja Turtles now.'”

C: Have you always been interested in design?
AW: I wanted to be a nurse but didn’t stick with it because I went to the military. With us having our own real estate business, I was able to design and figured out I’m actually kind of good at it. It grew from there. I got some of the kinks out and learned to be creative without breaking the budget.

C: How do you describe your style?
AW: I’m definitely modern, but I love bright colors. One of my favorite designers of all time is Diane von Furstenberg. I love all her prints.

C: What’s your parenting style? Do you run a tight ship?
AW: Oh yes, we have a schedule for everything. We have organized play. We have school time, wake-up time. I think kids thrive when they have structure. I think they do best when they can anticipate what’s happening next. I let them have free time, but at a certain time. Every minute of the day I know exactly what they’re doing, even if I’m not there.

C: What’s the biggest thing you’ve learned from being a mom?
AW: You can’t control it all. I’m a control freak. I love to keep things organized, and kids have a way of coming in and mixing it up. But it all works. They taught me to be OK with the uncomfortable. When I first had Ashton, I was a nervous wreck. When Amina came, I learned to just let things happen, and she’s so calm. Ashton is a bit higher strung, but I think that’s because I was the one that was high strung. Just letting go … I’m still learning, but that was a big lesson for me.

C: You’re so busy. How do you spend time together as a family when you get a break from work?
AW: The kids’ favorite spot is Main Event, but I think I’m winning them over with Dave & Buster’s.

C: And date night?
AW: We like to eat. I love movies. Most of the time we go to Movie Tavern by Social House.

C: And what do you do for yourself?
AW: I work out. That’s a big thing for me. I picked up running about three years ago. First, it was to lose weight, but then I realized I actually really like running. Distance helps me clear my mind. It’s my “me” time. It’s definitely my Zen.

RELATED: More Moms Who Know How to Design a Home from the Inside and Out
HGTV No Demo Reno’s Jennifer Todryk
HGTV One of a Kind’s Grace Mitchell
Urbanology Designs’ Ginger Curtis