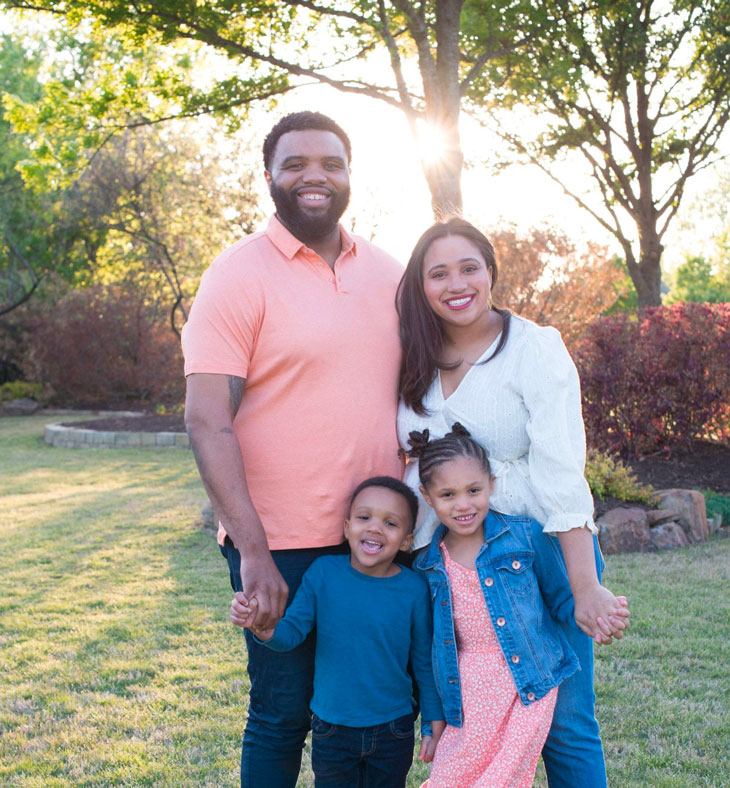 Marissa Allen has had a wild year. After finding success with her online cookie bakery that shipped nationwide, she and her husband Jeff Allen (former offensive lineman for the Kansas City Chiefs) decided it was time to launch a storefront for The Cookie Society near their family’s home in Frisco. They never imagined that a global pandemic would force them to close almost right away.

“Frisco was on lockdown. So we’re like, ‘All right, well, we’re going to do curbside,’” says Allen. And it was a hit. People began lining up to snag some of Allen’s treats, and just months later, The Cookie Society became one of Oprah’s Favorite Things of 2020. “I’m tired just thinking about it,” says Allen of all that’s happened, “but it was the most exciting thing.”

Age 30
Job Owner and baker at The Cookie Society, a gourmet cookie bakery
Lives in Frisco
Hails from Plano
Alma mater University of Illinois, where she played soccer
Significant other Jeff Allen, a retired NFL player and current CFO of The Cookie Society
Children Daughter Joy, 6, and son Jay, 4
Where to find her cookiesociety.com; in store at 9320 Dallas Parkway, Suite 160, Frisco
Follow on social media @CookieSociety on Instagram and Facebook

DFWChild: Where did your love of baking begin?
Marissa Allen: Baking began a long time ago. In my family, that’s our thing. We’re in the kitchen. My grandmother had a small catering company back in Louisiana when my dad was growing up. She was always like, “I’m going to teach this skill to you.”

So, we made pie and bread and cake. Never made cookies. I think they’re very shocked that I make cookies now, because it’s not something we ever ate growing up. They always poke fun at me that that’s what I went on to do.

RELATED: Where the Cookie Society’s Marissa Allen Treats Herself

C: How did you decide to make cookies your specialty?
MA: We went to New York and visited Levain Bakery, and that was my first time seeing a specialty [cookie] bakery. I grew up in Plano and went to school outside of Chicago. Then my husband got drafted to the Chiefs. But I’d never seen a bakery that just served one thing or was known for one thing. We stood in this line for 20 minutes, and I was like, “This is crazy.” But that’s where the idea came from. I thought, “Oh my goodness, I’ve never seen anything like this.” It was so inspiring to me that [the owner] was making something good enough that she only had to sell one product.

C: How did you turn that inspiration into your own business?
MA: I was just testing recipes. I have a food blog, firstandfull.com, but it’s mostly savory recipes, like quick dinners for young professionals and families. But I just kept making cookies, and I would have to get [the cookies] out of the house. They would go to the locker room with my husband, and the other players started making requests. My mind was blown. It actually was crazy because I had a 4-month-old and I had a 1-year-old. And we were away from family. [Still,] I was like, “Yeah, I want to go for it.”

C: What was it like running a new business with two young children and your husband traveling for work all the time?
MA: Insane. I look back—there were a lot of tears, and I think, “How did I do it?” It is complete divine intervention that we made it to this point, because I was just so exhausted.

He was playing in Kansas City at the time, so it wasn’t like he was here. I would take [the kids] to school. I would rush up to the commercial kitchen, do what I had to do there, get to UPS because I was still personally dropping off packages, then go pick up the kids.

Then for the weekends, I’d pick the kids up early from school, fly to Kansas City, watch the game so they could say hi to Dad. I was on the 6am flight from Kansas City every other Monday for almost two years. They knew us at the airport—“There’s the crazy lady with the two kids” —and I would always come through the terminal with a bunch of cookies. So I had a suitcase of cookies, each kid had a backpack, plus car seats. It was crazy.

C: How did your family end up back home in Dallas-Fort Worth?
MA: We wanted to be closer to the family after having our second child. And it’s just hard to be away. I’m an only child, too, so my parents were hurting. They’re like, “My only grandbabies are so far away from us.”

C: When do you feel like your business really took off?
MA: In 2018, I remember crying because I got into the Dallas Farmers Market. I was so excited, because you have to try out—it’s a whole process; they don’t just let anybody sign up. And I had to defer my admission because Jeff was going back to play [in Kansas City].

I was like, “This is it. I can’t do this. I can’t keep up.” Somehow, we just coasted through. We did a big holiday [in the business] that year, but I was just keeping really tight numbers on inventory. I did that for two years before we were like, “Let’s open Frisco.”

C: You ended up opening just as the pandemic was getting underway. How did you keep the storefront going?
MA: We would line up in front of the building and just run to cars. We would walk up and say, “Are you here for cookies?” We’re pointing at our shirt and at the building because their windows are up.

Some people were not here for cookies; they were here for a margarita because you could get a to-go margarita from Blue Goose [Cantina] next door. But they’re like, “Well, what do you have?” So we have to run back and get a menu. It was laminated. And then we’d have to bleach it. Oh my goodness, I don’t know how we survived that, but we did.

C: That would be hard enough, but you also had kids at home. How did you manage?
MA: Jeff and I were taking turns. I was always at the bakery by 5 or 6am. Jeff would get up with the kids, and then he would come into the bakery at 11am or noon, when my mother-in-law would come over to watch the kids. And at the time, we actually closed at 4pm because of the pandemic.

C: Your cookies were named as one of Oprah’s Favorite Things at Christmastime. That had to be surreal.
MA: It was incredibly exciting. At first, we thought it was a hoax, because the email was one line. And I was like, “How would they find me? How do they know?” And [the Oprah representative] said, “Put me in contact with your PR.” I was like, “Should I create another email address so I look like I have PR?”—because we weren’t as big as she thinks!

We sent them our current boxes, and I said, “I love our boxes. They’re custom-designed.” And she replies, “Do you have anything else? What about a crate or something?” So now I’m trying to call around, like, “Who can make crates for me? I don’t know a crate fabricator.”

We’re also sending them 12- to 14-dozen cookies, to New York, Los Angeles and Seattle. That’s where everyone was, because they were working from home. Once the cookies were approved, they said, “We need a final [crate] prototype in nine days.” We found someone through a friend, who said, “They don’t necessarily make crates, but I think they could do it for you.” He was able to get me literally two boxes. We sent them to [Oprah’s team,] and they liked them.

I asked [our manufacturer], “All right, how many more can you make?” And he’s like, “Well, if I start today, I can get you five pallets.” We put the money down. The representative still hadn’t given us the final, green light that we would be on the list, so it was risky, for sure.

C: Where do you see yourself and your business in five years?
MA: Oh my goodness, I don’t know. We’re looking at new spaces now. We have a couple of options. I really want to expand outside of Texas, bring stores to Houston, Kansas City, and Chicago—places that we really love.

I also really want to enjoy my kids while they’re young. We’re constantly asking, “OK, how can we remove ourselves from this portion of the business? How can I separate myself so that I’m not the business, that the business can be bigger than me?” Hanging out more with the family, that’s definitely in the next five.

Editor’s Note: This article was originally published in May 2021.