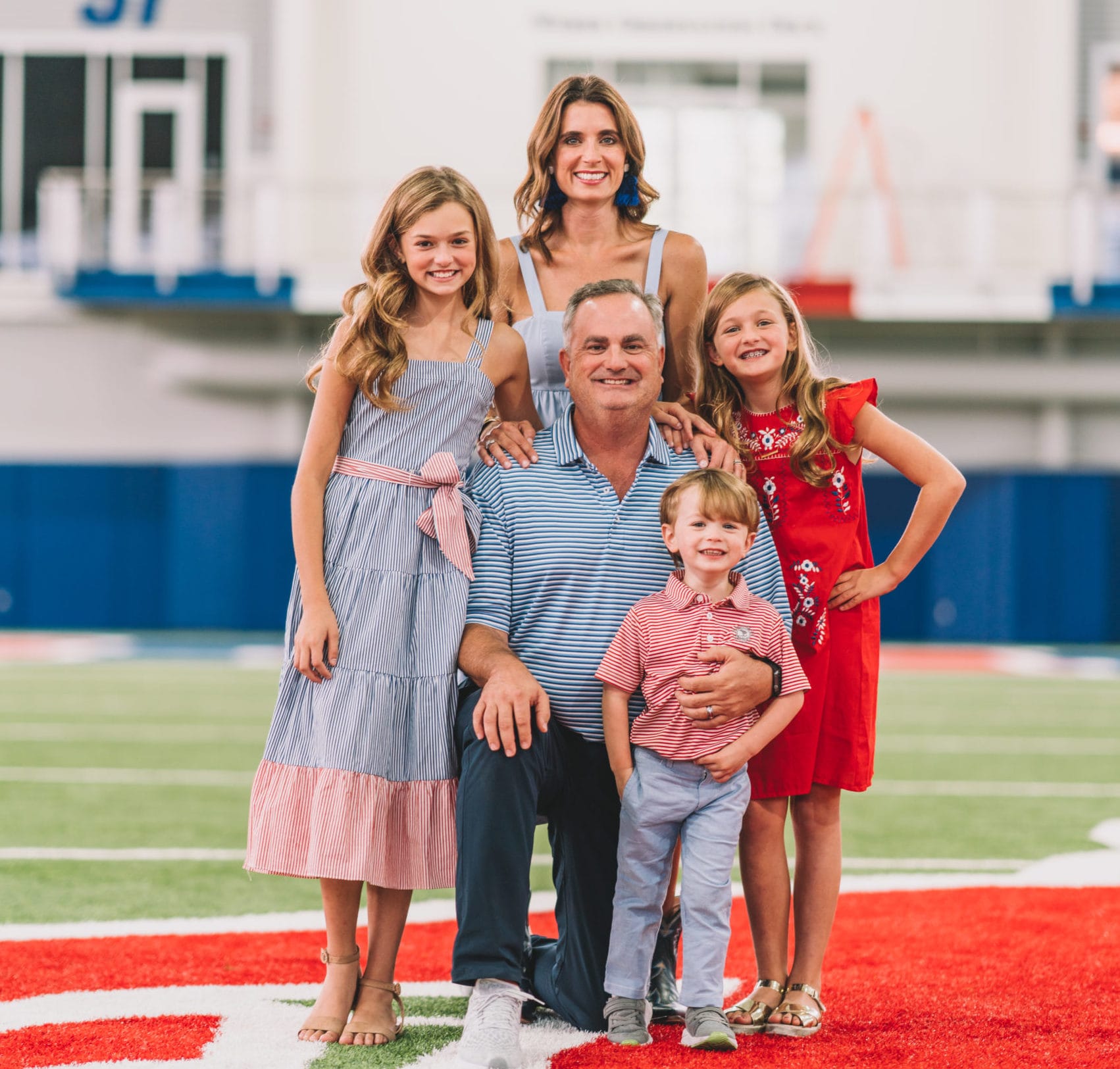 Being a coach’s wife is not an easy gig. Being mom to three kids and being the wife of the coach Sonny Dykes—who achieved the most winning season for Southern Methodist University football since 1984—and has been announced as the new football coach at Texas Christian University—is even more challenging, but it’s a position that Kate Dykes handles with grace, humor and gratitude. She feels lucky that her children are surrounded by the team. “They have all these big brothers that they get to have these healthy, good relationships with,” she says. “It’s a big deal to them.”

As for whether she likes being a Dallasite, the answer is simple: “No one in the country can have a better setup. I walk three blocks to the football stadium—I mean, it does not get better than that. We can walk to the games or drive a golf cart. Just ‘simple life’ is worth its weight in gold.”

Hails from: Wichita Falls
Lives in: Dallas
Children: Allie, Charlie, and Daniel
Alma mater: Texas Tech with a degree in communications
Significant other: Husband Sonny Dykes, former head football coach at SMU, now at TCU
Parenting goal: “Structure. Every kid is different, but I think our house is a little cuckoo-crazy just because of football, and there’s a million things going on. I know immediately, if our kids are out of whack, it’s because there’s been no structure.”
Follow her: on Instagram @kategdykes

DFWChild: How did you and Sonny meet?
Kate Dykes: I wanted to be a sideline reporter, but my whole life I was an athlete. My dad is a coach, my grandfather is a coach, my oldest brother is a coach. I worked in the sports information department at Texas Tech when I was a student. Our families knew each other through coaching, but he’s 12 years older, so Sonny and I just never really crossed paths.

When I finished at Texas Tech, I saw they had a bunch of coaches out one night during football camp. We ran into each other and he said, “Oh, what do you want to do after you finish school?” He’s like, “Oh, I’ll help you find a job. Let me take your number.” So, he reached out and said, “Here’s what you need to do.” It was very organic; we just never didn’t talk every day after.

C: How many years later were you married?
KD: Two. I lived in Houston for a year. He was 34 when we started dating, I was 22. He called my dad and said, “I think Kate and I need to live in the same town.” So then I moved back in August. We were engaged in March and married in July.

We spent that first season at Texas Tech. Moved in December or January; coached the next season. Then I got pregnant and then [Allie] was born our second season at Arizona. So she’s lived in Arizona, Louisiana, California, Oregon, Dallas. When we moved here, she was 9.

C: With so much moving and travel, how do you create stability for your family?
KD: It’s hard. When they’re younger, it’s a little bit easier because they don’t really understand and they don’t have a concept of missing friends. When we moved from California to Texas, it was a little traumatizing, especially for our oldest. She was almost finished with her third-grade year. I am so proud of her. I keep telling her, “I knew one place. You’re getting to see different parts of the country, and culture and people, and you’re certainly going to be better for it.” I try to say, “It’s not easy; I know it isn’t, but it’s a part of being a coach’s kid.” It helps too … when you move with a staff—we have 46 kids [in] our staff [families].

C: Having that community must help with the transitions.
KD: It’s nice to have the familiarity. On our staff, we have a receivers coach who played for us at Tech, lived with us for three years in California, and now coaches for us. He’s Daniel’s godfather. So for [the kids], it’s almost like that’s their family.

They’re happy, especially our 11-year-old because she’s been to a lot of schools. They went from California to Fort Worth in February, and then Fort Worth to Dallas April 1. So in 14 months, three different cities and three different schools.

C: Wow, that’s hard.
KD: But you know what? They are like the bravest, coolest people I know. I envy them. I tell them, “You’re better walking into a school not knowing anyone than I am walking into a group of moms.” I think they’re starting to understand that this isn’t a bad thing, it’s kind of a cool thing.

C: You went from being a coach’s daughter to a coach’s wife, so you’re probably accustomed to the pace, but is it always nonstop?
KD: It is, a little bit. It’s changed a lot. I feel like it even is more so now because college football has changed so much. Especially our kids—they’re used to constantly having people in our house, which we love. We could choose not to. We want it that way. Last night we were at a Super Bowl party with recruits and players; to them that’s just normal. Tonight Sonny has a function; tomorrow night he has a function. Wednesday at lunch he has a function. Wednesday night he flies to Houston. A lot of those things, I’m supposed to be with him while parenting three children.

C: That seems almost like an impossible task.
KD: It’s hard because you think, I have to be a good mom, but I also have 120 young men that I think of as my own, where you need to be present for them. I think with our kids, there are times when they think, I just want my dad, for me. We sometimes go through that, but the good thing about Sonny that I think is different than most coaches, and I think probably because his dad was a coach, when he walks in the door he pretty much shelves football. He’s very present with the kids.

C: Sonny has done amazing things with the SMU football program after it struggled for 30-plus years. How do you think he’s done it?
KD: I am so proud of him. He’s recruited Dallas for 20 years. So he always would say to me, “I just feel like they’ve never capitalized there.” Which is why he did like the Dallas logo with SMU. That was all him, because he kept saying we just have to be Dallas’ team. We’re your hometown team, just support your hometown team. I think it’s slowly working. But you have to win. It’s the nature of the beast a little bit.

We always tell our players too, “Just be patient.” This year, we broke the attendance record. It still needs to be a lot better, but we did so much better. That first year when there was no one in the stands, that’s disheartening for them. You just have to say, “Listen, just keep doing what you’re doing. When we win and when the product is good, people will come.” It maybe shouldn’t happen that way, but it’s just the way life happens.

C: You plan a trip with all of the coaches’ wives every year. What led you to do that?
KD: They’re amazing. We try to do as much as we can, like a staff retreat and coaches’ wives trip, and any chance we can to celebrate them. They give so much. Anything we can do—they’re so grateful.

This is the first job we’ve ever been on where there’s no drama, because when you put 25 women together of different ages, different backgrounds—a lot of times very competitive women, because it’s sports and you kind of marry like people, and so it’s interesting. That is not the case here. So it’s really fun for me.

C: Having that camaraderie must be wonderful since you all share so many experiences.
KD: I think it’s really important because even my best friends that I love and adore, it is hard for them to understand what your day-to-day life is like unless you’re a coach’s wife. Because I don’t work, I think sometimes people think, “Oh, I bet it’s awesome. She just sits at home and picks up her kids.” I’m like, “Oh, I wish.” I would love that.

I’m not complaining, but I think [other coaches’ wives] get it, they understand what you’re sacrificing, what your day-to-day life is like. I think no one really understands, unless you’re a coach’s wife, what it feels like to go through a game day, or after a loss, or after a win. So I think when you can really have that community, then you have someone when it’s not good to go to, when it is good to go to and all the in-betweens. Where you say, “What do I do? How do I respond to this situation?”

C: Having moved so much, are you always waiting for that phone call from Sonny?
KD: I hope and pray. Sonny and I talk about this all the time. Usually by like year two or three somewhere, you prep yourself for the move because if you don’t, a lot of times you’re going to end up getting fired, even if you’re doing well. The business almost makes you accustomed to it. This is the first time ever that like there’s never been the itch. We’re happy.

C: What is your favorite part of being a coach’s wife?
KD: I think for me, it’s just an avenue to kind of still be in sports, but not. I think, too, it’s getting to be around all the players. When you surround yourself with young people, I think it keeps you young, and it keeps your mind open. I feel like as people get older, your mind gets a little bit more close-minded. I don’t ever want to be that person that just sits and says, “Oh, you shouldn’t do that,” just because I’m old and it’s a different way. We were once the new generation. So, for that, I love it.

This article was originally published in March 2020.