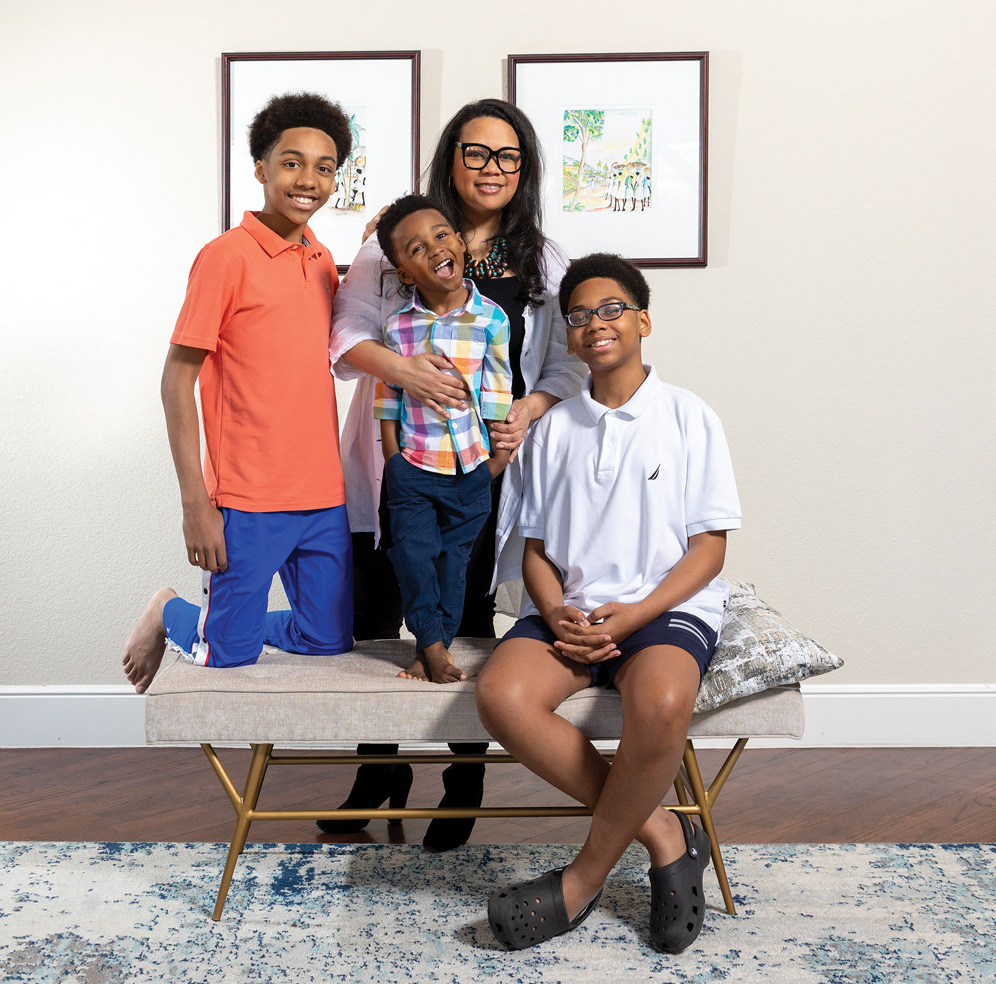 You could say Leigh Butler’s life was charmed. She earned a degree from an esteemed university and was thriving as a wife, mom and business owner. But a few years ago, Butler and her husband found themselves in a financial crisis. They ultimately had to seek assistance just to keep food on the table. Health concerns that accompanied a surprise third pregnancy added to the stress.

That’s about the time that the Butlers moved to Texas from Alabama. Things started to get better—and then the pandemic hit, and the nation plunged deeper into divisive debates about politics and race. Butler used those factors to her advantage and moved forward with an idea she’d been considering for a while. Last November, she launched Meet Akina, an online platform and app aimed at creating community and addressing challenges faced by Black mothers.

Since its debut, Meet Akina has had an overwhelmingly successful response. “We want to be that safe space where you can talk to your girlfriends,” Butler says, “even if you’ve never met in person.”

Current position CEO and founder of Meet Akina
Age 43
Lives in Frisco
Hails from Fort Worth, where she grew up with sister Codie Oliver—co-creator and director of Black Love, a docuseries on the Oprah Winfrey Network
Alma mater Hampton University in Hampton, Virginia; earned a bachelor’s degree in English Arts
Significant other Husband Chris, chief operating officer of Meet Akina
Children Sons Caleb, 13, Gavin, 12, Dylan, 3
Where to connect meetakina.com and on Instagram @meetakina

DFWChild: Home is now Frisco, but you’ve also lived in Fort Worth, Virginia, Washington, D.C., Alabama and Dallas. What took you on that journey?
Leigh Butler: I love Fort Worth, but I knew I wouldn’t come back to live there as an adult. Going to college somewhere far away like Virginia was my parent’s rule. They wouldn’t pay for a local school because they wanted to teach me independence. I moved to Washington, D.C. for a job. Once [my husband] Chris and I got together, we moved to Birmingham, his hometown. Then we moved to Dallas before settling in Frisco.

C: How did you and Chris meet?
LB: When I was in Washington, D.C., Chris came to visit a mutual friend who played football for the Washington Redskins [now the Washington Commanders]. When Chris came in town, I was showing them around the city, and I guess we never looked back. Chris and I met in December 2005, got engaged in May 2006 and married in 2007.

C: Within three years, Caleb and Gavin came along. Did you always know you wanted to be a mom?
LB: Absolutely. My mom nicknamed me “Mama Leigh” because I “mommed” all my friends as a child.

C: What surprised you most about parenting?
LB: I wasn’t prepared for how much I would love them and be so willing to sacrifice. Just wearing your heart on your sleeve and having this overwhelming need to protect them—it’s the hardest part of parenting but also the best part. 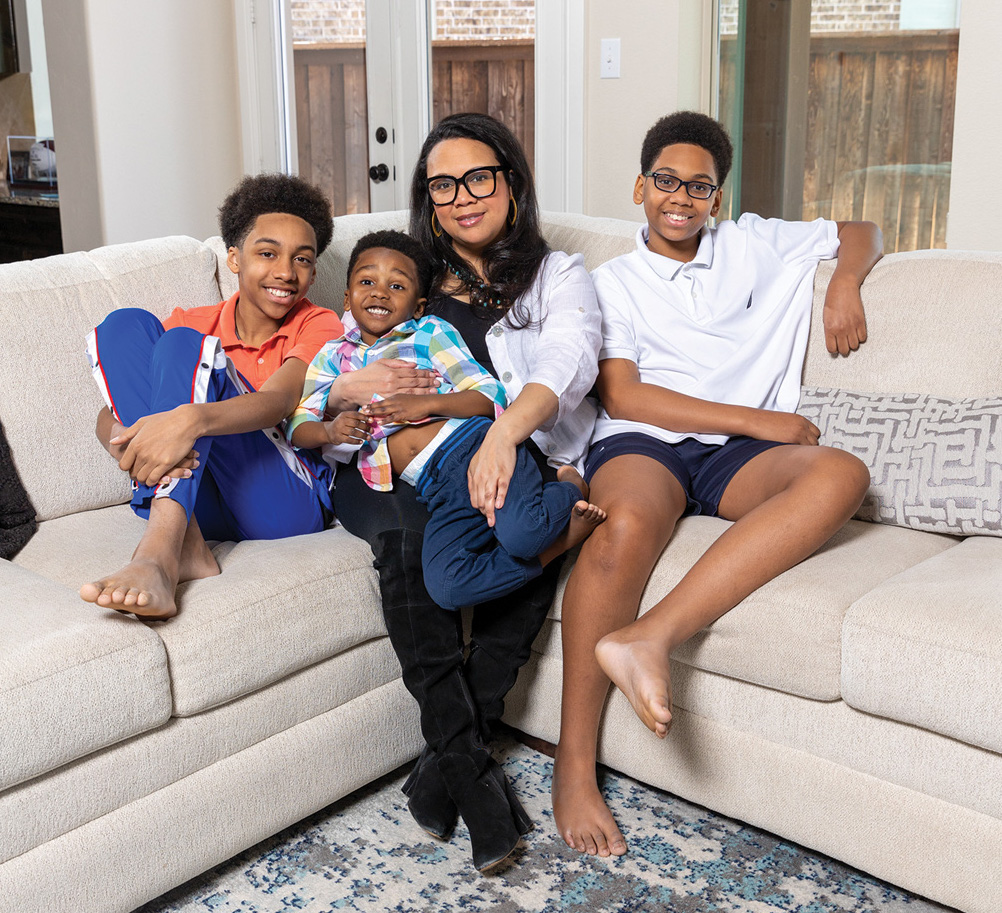 C: Let’s talk about when your life turned upside down. What happened?
LB: We were in Birmingham and had two business ventures—an upscale barber shop and a hair and skincare line for men. During that time, we made the tough decision to close our businesses and found ourselves in more debt than we could handle. We knew we needed a change, so we decided to move to Texas to be near family.

C: Did things get better once you were here?
LB: Unfortunately no. I found a job in Dallas working with a senate candidate, then he decided not to run, which was a huge blow. I was supposed to have a good salary, so we enrolled the boys in a highly recommended Frisco Montessori school. We had tuition to pay. Chris was working a couple of jobs but was significantly underpaid.

C: And then life hit you with another surprise.
LB: Yes. I found out I was pregnant with Dylan. It’s hard to find a job when you’re pregnant. Dylan was born healthy and happy, thankfully.

“I lacked a tribe of women, and I got the sense that during COVID-19, other women needed connection, too.”

C: A blessing for sure—but a growing family also means more pressure on already limited resources. You finally needed additional assistance. What led up to that point?
LB: Child care is expensive, so I took a part-time job, with the American Liver Foundation, that let me work from home. My husband was interviewing for a job with a financial corporation, but at the time was underemployed at a local business. Even though we were bringing in income, it wasn’t nearly enough. We had to figure out other options.

C: When did things start to turn around?
LB: I was laid off from the American Liver Foundation—but from there, some of our local doctors formed the Texas Liver Foundation and hired me on full time. I was also doing some consulting work, since everything was virtual. And Chris got his job in banking. We eventually got back on our feet.

C: Fast forward to your newest “baby,” Meet Akina. What sparked the idea for an app to connect Black moms?
LB: My pregnancy with Dylan left me feeling very alone. And I experienced health issues, something that’s not uncommon for Black women during pregnancy. I lacked a tribe of women, and I got the sense that during COVID-19, other women needed connection, too. My husband was behind the app idea from day one, but I kept putting things off. It felt so overwhelming.

C: What prompted you to finally go for it?
LB: The George Floyd incident pushed me off the fence. What happened to George Floyd has happened to too many Black men, women and children for centuries. The difference here was the callous disregard for his life, his humanity. And it happened right before our eyes in a way that it was impossible to deny. From talking to my friends, family and community, I knew we were all craving a safe space to discuss our feelings and how to have these conversations with our kids.

Once I finally got the courage to make Meet Akina happen, it took around 11 months to get the app off the ground. We launched last November with several partnerships with organizations looking to move their communities over from other platforms to Meet Akina. These groups represented more than 20,000 moms and caregivers. We have moms from the United States, Canada, the United Kingdom, France, Germany and Nigeria, to name a few.

C: What makes Meet Akina different?
LB: Our goal is not just connection but education, information and resources as well. It’s an inclusive community that focuses not only on Black moms but any mom, caregiver or auntie who is raising a child of a different color. We’re also working on a desktop interface with life skills courses and an on-demand library covering finances, cooking and other topics.

C: How fulfilling was it to see Meet Akina come to life?
LB: Working for yourself is rewarding but tough. Being able to do something I am passionate about and hearing from other people about how it impacts lives—that keeps me going.