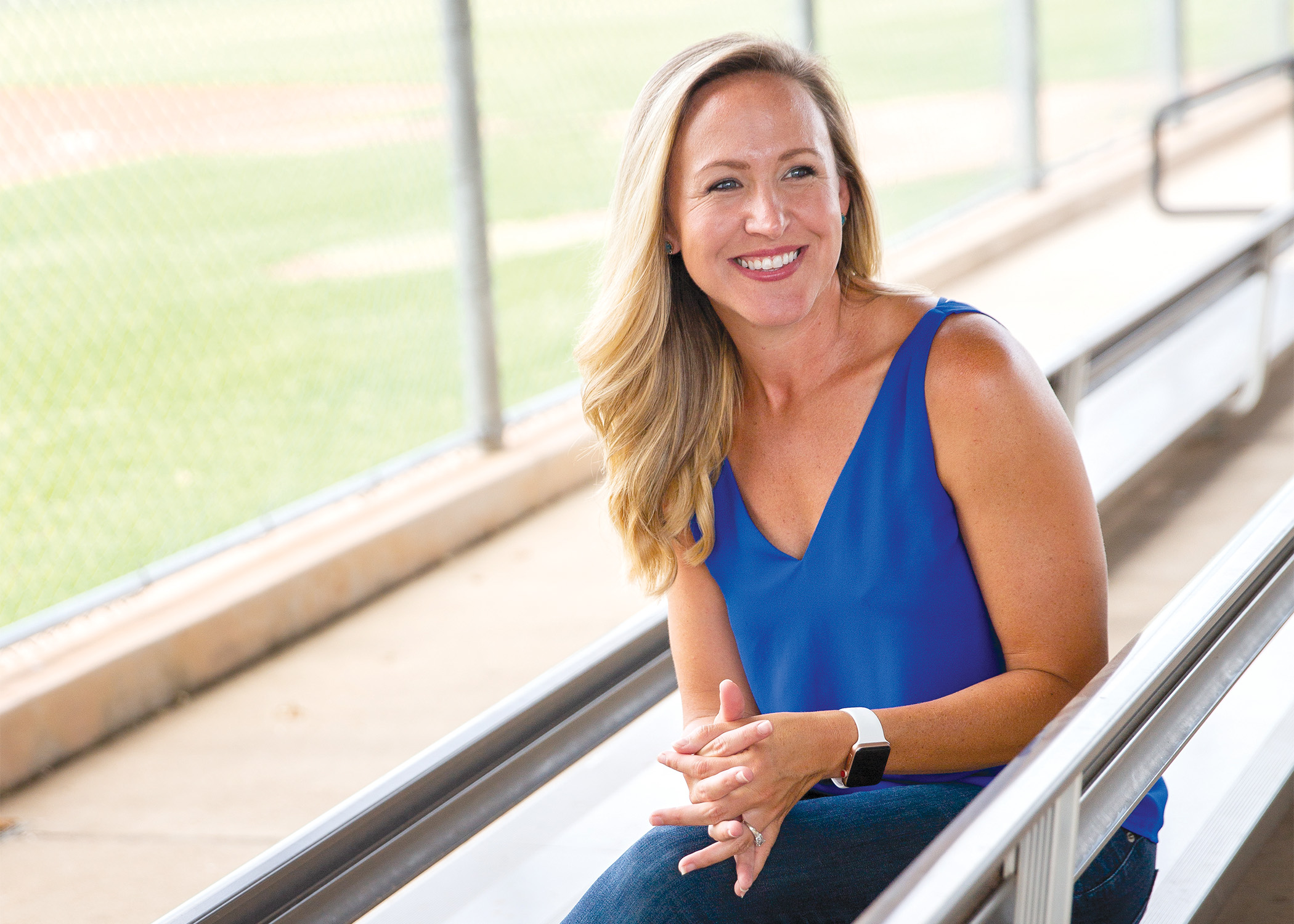 Chances are, Kris Budden has graced your television screen at one time or another. In little more than a decade, her career has taken her from Charlottesville to Knoxville to San Diego, culminating with a dream job at ESPN that allowed her to move back to Dallas, the city she calls home.

As Budden’s career soared, so too did her personal life. She married her husband, Mario, four years ago and welcomed son Jace in 2016. It hasn’t all been smooth sailing, though.

With news of her pregnancy came a flood of emotions Budden didn’t expect, namely fear, self-doubt and uncertainty about what motherhood might mean for her hard-earned career. Fearing discrimination, Budden kept her pregnancy a secret for as long as possible. She documented the decision in a blog post that’s since gone viral—and empowered countless other women.

“I felt that there was this perception of women in sports—that you have to be beautiful and thin,” she says. “I diminished my own skill sets. And I couldn’t have been further from the truth.”

What attracted you to sports journalism?

My godfather [Scott Sams] was an anchor on WFAA during the evening news. Growing up, I used to shadow him. I’ve known this was something I wanted to do since I was 12.

What do you love most about your work?

Getting to witness players’ best moments—a backup quarterback coming in with a Hail Mary for a touchdown or a baseball player’s first home run or a walkoff. Those are the moments that I love.

Is there a specific moment that stands out?

I covered the London Olympics in 2012 and was in the Olympic Village when Andy Murray won the singles title. It was a pretty cool moment.

What’s the most challenging thing about your work?

It’s a lot of travel. I’ve worked almost every Christmas and Thanksgiving. It’s such a fun job, but there’s give-and-take.

Anything about your job that would surprise us?

It’s a lot of studying. During football season, I spend Sunday through Thursday reading up on every player and watching every game from the week before. People don’t realize that I’m at a game and then on an airplane, so on a Saturday, the only game I’ve actually seen is the one I’ve done.

Who do you look up to in the industry?

Michele Tafoya. Pam Oliver. One of the other things I love about ESPN is that all of the women are so supportive of each other. We don’t ever see one another because we’re all at different games, but we’re constantly contacting each other.

What has your experience been like as a woman in a male-dominated world?

I’ve certainly had #MeToo stories. People say things and doubt your knowledge. I feel like there’s a higher expectation for my knowledge, so I always try to make sure I’m on top of my game. I don’t deal with it as much as I used to.

Tell me about deciding to hide your pregnancy.

I felt that it meant that I was getting older, and there was a fear that people wouldn’t hire me. I didn’t feel pretty when I was pregnant and thought people wouldn’t see me as the cute blonde on the sidelines anymore; they’d see me as an old mom.

But you learned you were mistaken…

The Tennis Channel hired me when I was 32 weeks pregnant, and I was hired by ESPN four weeks after I had Jace. I needed to realize that I wasn’t working for ESPN or FOX because I was pretty and skinny. I was there because I was good at my job. Becoming a mom didn’t make me less of an excellent reporter.

Did you always want to be a mom?

I did. In this career, you sacrifice a lot to move up. I felt like I reached the pinnacle of where I wanted to be at ESPN. Then I had Jace and it was like, OK, now I’m where I want to be. How do we manage having a family and doing this, too? I’ve given so much to my job for so long that I feel like I’m failing at my job if I don’t give 100 percent, but I feel like I’m failing at home if I don’t give 100 percent. You just have to be OK with not being able to give 100 percent on both sides.

Do you struggle with mom guilt when you travel for work?

I do struggle with being away. We’ve started to hit the age in which Jace will see my suitcase and start throwing a temper tantrum. But this job also allows me to pick him up from school during the week. There are sacrifices you have to make, but at the end of the day, you do what you have to do to provide for your family.

What’s your favorite thing about being a mom?

There’s so much. The snuggles, even those are few and far between. Just the fun of it. Being able to witness your child experience something for the first time. The joy he has in learning new things. Seeing his face when he conquers something is really priceless.

What’s the most challenging?

At the stage that we’re in right now, the emotional uncertainty. I never know if something’s going to set him off. You’re always walking on eggshells with a toddler.

What do you do to take care of yourself?

I enjoy a glass of wine at night. We try to go out and have date nights. When I have time, I play tennis; my husband and I play together.

Any plans for number two?

I had a miscarriage during football season. We planned Jace around certain sports seasons and planned to have a second around my downtime. I realized that God sometimes has a different plan.

You’ve accomplished so much. What’s left on your career bucket list?

Top of my bucket list would be the tennis majors. I’m where I want to be now. It’s just getting to cover more events and different sports.