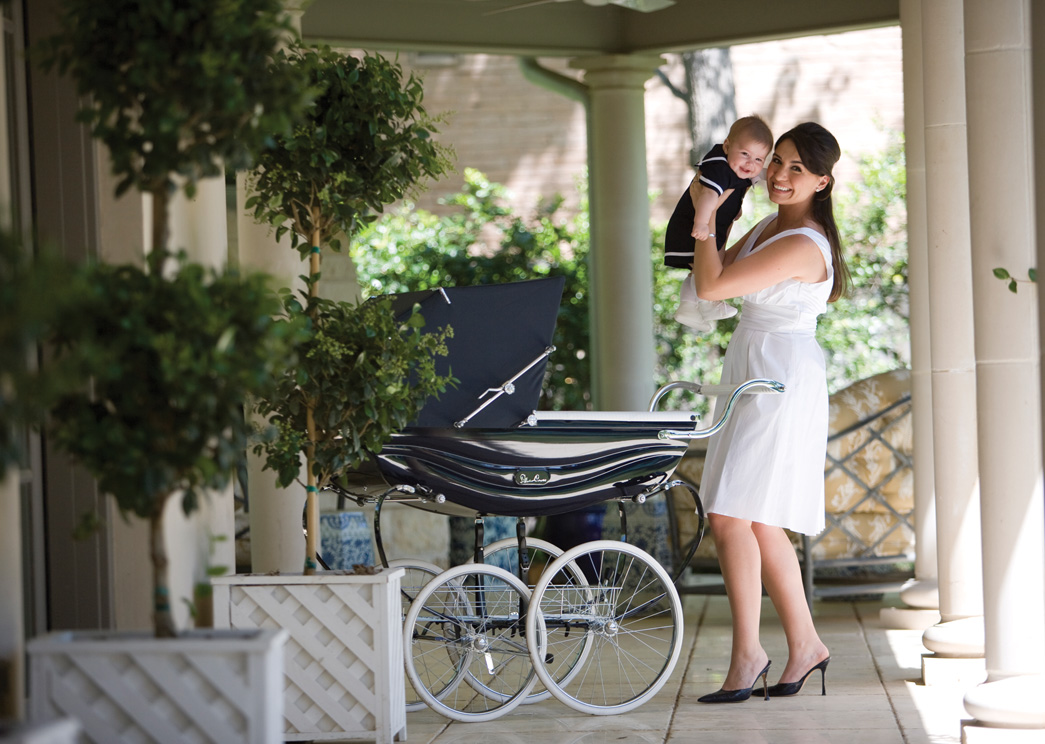 Walking into the main tent for the opening show of Fashion at the Park recently, I see four familiar faces smiling at me straight ahead. It’s the Schlegel women — Mrs. Schlegel, Kari, Krystal and Kimberly (now a Whitman) — whom I haven’t seen in what seems like ages. As I stop to say hello to the family I’ve known for nearly 12 years, Kimberly whips out photos of her 5-month-old baby, JR, as we quickly catch up before the lights dim. “I’m so obnoxious with these,” the proud new mommy says as she rustles through her Birkin bag, pulling out a stack of photos to introduce me to her newest joy.

Local entrepreneurs originally from Ontario, Canada, the Schlegel family is well known in Dallas — not only for their smart business sense, but also for their charitable generosity and social presence. Kimberly, the eldest of four siblings, inherited these qualities and lives by the maxim her parents set: “To whom much is given, much is expected.”

Days later, I’m petting Whitman’s dearly beloved Lola, her Chihuahua of 10 years, in her chic cream and blue Park Cities living room, while the baby sleeps soundly upstairs. “We had seven babies over this morning for playgroup,” beams Whitman as she sits down. She realizes that this is the quietest she’s heard her house in a long time. In the past five months, Whitman’s life has definitely changed — and she loves every minute of it.

WHAT SHE DOES
An Art History graduate from SMU, Whitman worked at Christie’s Auction House in New York City and owned a local luxury party rental business. She’s currently awaiting the September release of her fourth book on entertaining, Tablescapes: Setting the Table in Style (Gibbs Smith, 2008), which she wrote while pregnant.

Immediately after giving birth, Whitman only wanted to be with her son and nothing else. She had no interest in working at that point. But eight weeks into being a mommy, the success bug returned and she couldn’t wait to start. “I still want to do those things that make me fulfilled as a woman,” the first-time mom emphasizes. In other words, finding that perfect balance — what all moms strive for.

As far as her day (or should we say night) job, Kim steals moments away while JR sleeps during naptime or late at night to write and work on her projects. Whether it’s for a book she’s penning or projects related to her role as a spokesperson for Purina, Kim puts her heart into everything she does.

And she feels blessed to be able to focus on what she’s passionate about. “I can’t complain,” admits the busy brunette, smiling softly.

HOW SHE DOES IT
As for her social life, that has changed too. “You have to really want to do something to tear yourself away from the baby,” explains Whitman. Although she still tries to go support her friends in whatever they do, Whitman and her husband, Justin (son of legendary actor Stuart Whitman), only go out about two or three nights each week. It’s especially hard for Justin to prefer going out, says Whitman, since he’s at the office all day and away from his baby son.

Learning from the way her parents raised their family, JR isn’t on a daily schedule or routine just like most babies his age. Instead, he sleeps when he’s tired and eats when he’s hungry — regardless of the time. With their on-the-go lifestyle full of travel, they need JR to be able to “adapt to different situations,” says Whitman. “That’s what my parents did with us,” she adds.

As a work-at-home mom involved in numerous charities and a corporate spokesperson, inevitably there are obligations and other responsibilities that call her away on occasion. But between a nanny and a big (local) family, the Whitmans have plenty of eager helpers ready and willing to watch after little JR on a moment’s notice. “He is so blessed,” purrs the glowing mommy as she muses about the loving family that surrounds them.

Editor’s Note: See what Kim’s up to now in Catching Up With Kimberly Schlegel Whitman, Author and Lifestyle Expert.