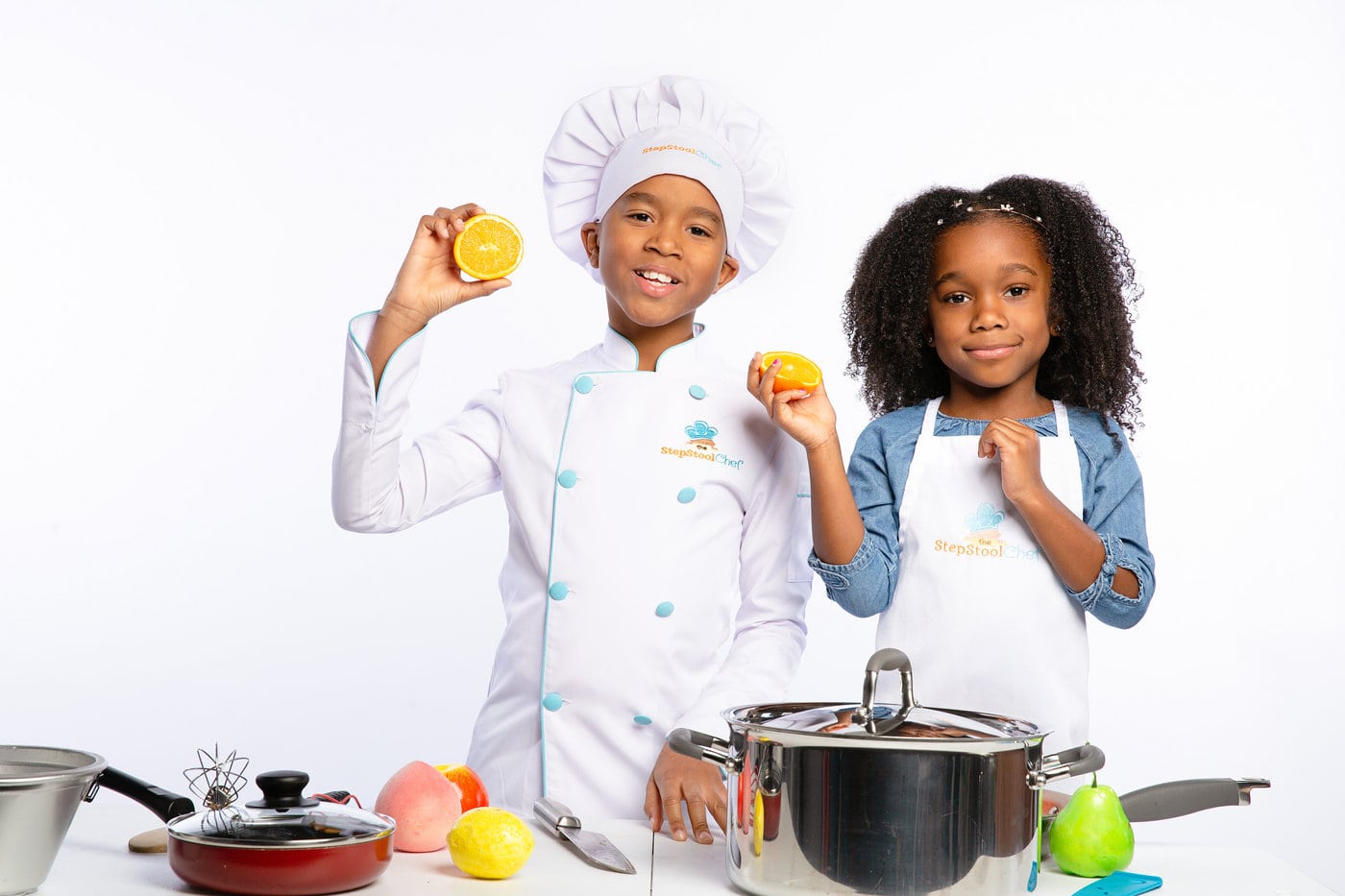 Last year, did you spend a lot of time in the kitchen? So many families seemed to bake their way through quarantine. But did any of you turn your new hobby into a business? One North Dallas kid did. Meet Julian Frederick, 12-year-old CEO and co-founder of Step Stool Chef.

Julian started working on his kitchen skills in 2011, near his birthday. Dallas was hosting the Super Bowl, and our area had actual snow. The weather forced Julian’s family to cancel their plans to celebrate his birthday. Luckily, the family had all the ingredients needed to make a homemade birthday cake using Julian’s great-grandmother’s recipe.

And Julian insisted on baking the cake himself.

“My first instinct was to say ‘no,’ but he was so confident that he could do it that I decided to take the chance,” remembers Toria Frederick, Julian’s mom. “He got on his step stool and put on his new chef jacket—hence the name of the business—and got to work. He was so proud of himself for making his own birthday cake, and that was the beginning of his cooking journey. For almost 10 years, Julian has operated as the head chef and I am his sous chef, helping out as needed while he takes the lead.” 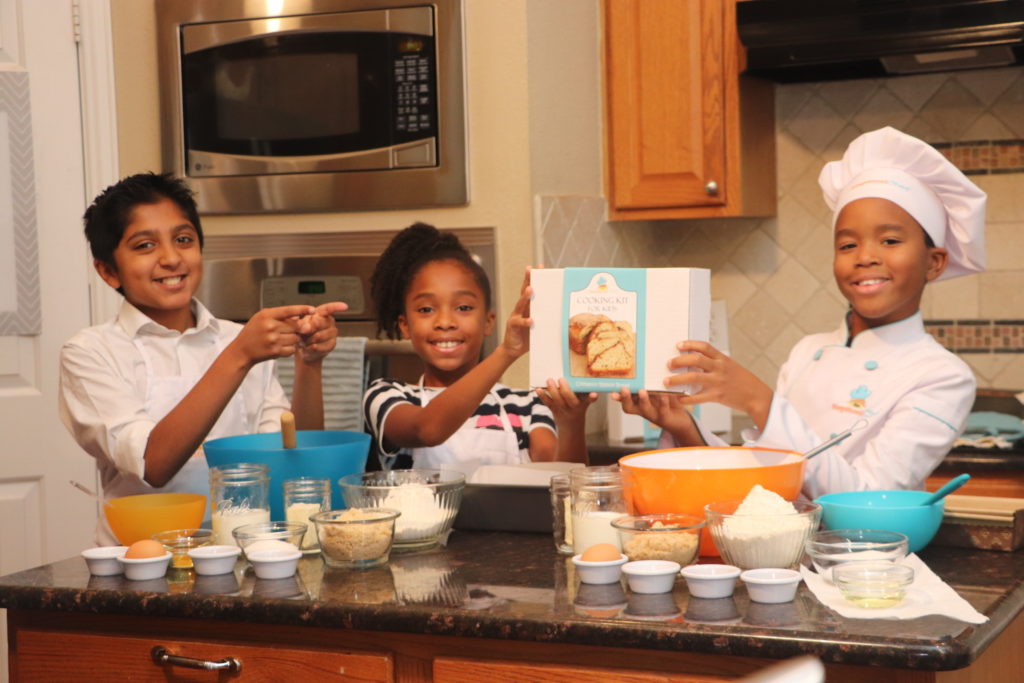 Not long after he discovered his love of cooking, a business was born. Julian says it had a lot to do with his favorite part of the activity: “when the recipe is finished, and you get to look back on all the work and fun that went into creating it.”

“You have a better appreciation for food when you’re the one that made it because you see the steps and ingredients it took to put it together,” he explains. “I use cooking as a way to express my creativity and love for experimentation.” Julian says some of his favorite things to cook include a cinnamon ribbon bread and pizza burger sliders (both of which are included in his Step Stool Chef app).

That’s right, he has an app. Oh, and a cookbook in addition to a website he and his mom started as a way for him to document his culinary adventures. (Not too shabby, huh?)

But it was an unfortunate experience with that website that launched him into his current ventures.

In November 2019, Julian’s website was hacked. All of the recipes he collected over the years were erased.

“That was particularly tough because our site had become a scrapbook of sorts, capturing all of our mother-son bonding moments,” says mom Toria. “Step Stool Chef has been a big part of Julian’s childhood; even though company websites get hacked all the time, this felt more personal. It was erasing childhood memories.”

After months of failed efforts to fix the old site, the Frederick family had an idea. “We realized that due to a past partnership with a food tech company named SideChef, many of our recipes and memories were still captured on their app,” notes Toria. They reconnected with SideChef, which then opened some exciting doors.

“Even though getting hacked was a scary time that felt like the end of the road for our company, it led to an amazing opportunity with endless possibilities,” Toria adds.

One year after the hack, the Step Stool Chef Cooking School for Kids app on SideChef Premium took off. The virtual cooking school provides opportunities for families to create memories in the kitchen, all while building important life skills.

Plus, Julian was able to launch a new website with some new products (think recipes, cooking kits, aprons and The Step Stool Chef Cookbook for Kids, of course).

And his cooking classes on the app are designed to make learning how to cook easy.

All the lessons and recipes are made with kids in mind so they can complete them on their own with little to no help from an adult.  “They go beyond learning how to make pizza and cupcakes,” he says. For example, some of his recipes include math and science lessons.

Julian hopes his business will provide a way for kids to build important life skills through cooking. “I believe that cooking is a great way to learn decision making and problem-solving, which kids will need as they grow up,” Julian explains.

He also hopes this will inspire kids to just get in the kitchen and simply enjoy making food. “I believe that seeing other kids cook motivates [them] at home,” Julian adds. “That’s why everything we do at Step Stool Chef is made for kids, by kids.”

In fact, Julian recently started the Step Stool Chef Taste Buddies—a global network of kid chefs that are all working to inspire kids in the kitchen. His mom says this is all part of building a community “where kids are the chefs and parents are the assistants.”

And what’s next for this young CEO? Another book.

But this time, it’s not a cookbook. Business Success Secrets: Entrepreneurial Thinking That Works is scheduled to be released this March. Julian has also been invited to join a multi-author collaboration of successful entrepreneurs (and, as you might expect, he’s the only kid). He plans to share his insights and lessons learned from running a business at a young age.

We can’t wait to see more of what Julian accomplishes down the road—in the kitchen and out.