How to Carve Pumpkins with Kids: Patterns, Tips and Tools 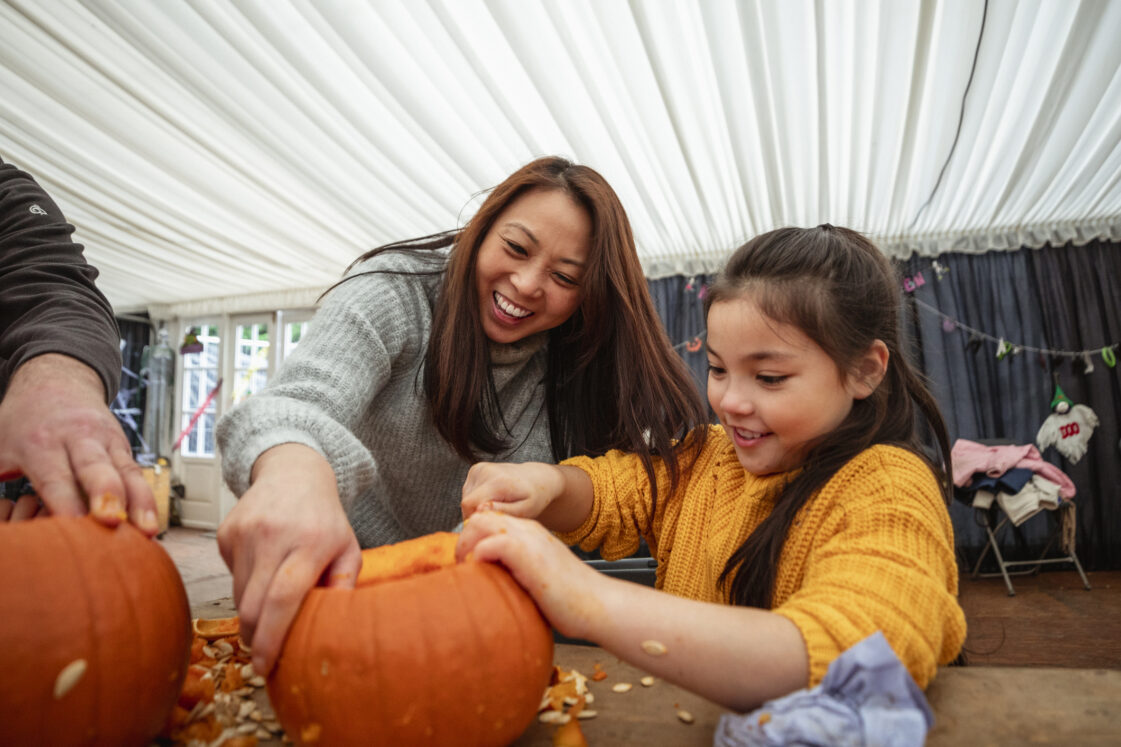 If you’re planning to carve pumpkins with your kids this Halloween but aren’t sure where to start, follow these tips from Kristina Patenaude, a professional pumpkin artist who carved pumpkins for this year’s Pumpkin Nights’ Austin location. (Pumpkin Nights is also in Dallas through Oct. 30.)

The biggest thing to keep in mind when carving pumpkins with kids? “It’s not always about it coming out great. It’s about just starting the process of learning how to craft together,” Patenaude says. “It’s a really fun, whimsical craft to do together and it’s a bonding experience. I think that’s why a lot of people do pumpkin carving together…to just have that fun, silly togetherness.”

The second thing to keep in mind when carving pumpkins with kids is, it’s better to carve fresh gourds. Since the pumpkin picking season is relatively short and you need to visit the pumpkin patch before they’re gone, Patenaude stresses the importance of keeping your gourds cold when you get them home. This will keep them fresh until you’re ready to carve. It’s best to keep them in the fridge, if you have room or a second one in the garage. Or, as Patenaude does, put them in a cooler or insulated bag with ice packs.

Ready to get carving? Here’s everything you need to know about how to carve pumpkins with kids this Halloween.

What should I look for when picking out pumpkins for carving?

When choosing a pumpkin to carve into a jack-o’-lantern, Patenaude says to look for the “very round, pretty ones because they’re most likely going to have thinner, more even walls.” Having a thin wall is going to make it easier to cut corners and fine details of your design.

And “always look for stuff that’s under ripe. If it’s soft enough to eat, it’s too soft to carve,” says Chef Ray Duey, a master culinary artist who has competed on the Food Network, carved a pumpkin “haunted house” on the White House lawn, and returning to the State Fair of Texas for live carving demonstrations (in the Go Texan Pavilion from 1–7pm). “Obviously no blemishes or breaks in the surface. Try to find one that matches the size design you wish.”

What are the best jack-o’-lantern designs for kids?

“I think sometimes people try to go for big intricate pieces and they miss out on how cool really simple shapes can look as a jack-o’-lantern,” says Patenaude, who was a finalist on season 2 of Food Networks’ Outrageous Pumpkins. Plus, simple shapes are easier for younger kids to carve out.

With younger kids, Patenaude suggests having them a simple shape in the center of the pumpkin, like a bat, then “poke holes all around it to look like stars with light shining through. That will look amazing lit up,” she says.

For older kids and teens, encourage them to try chip carving their pumpkin. You can buy carving and sculpting tools (like these from Amazon or Target) that cut just into the surface of the pumpkin rather than cutting all the way through the pumpkin.

Another cool idea Patenaude is fond of? Carving a simple shape, like a star, bat, or crescent moon in the back of the pumpkin. That way, when it’s lit up, the design will be illuminated in the front and the simple shape will glow on the wall behind the jack-o’-lantern.

Do your kids need help thinking of a design? “There are a myriad of pumpkin pattern sites such as stoneykins.com and pumpkinglow.com,” Chef Duey says. “Each site has patterns from simple to headache-inducing!”

Don’t shy away from using root vegetables to add to the design! Patenaude uses beets, carrots, potatoes, radishes, and more to add details. For example, she sometimes uses russet potatoes as eyeballs and teeth when sculpting pumpkins (like in the image below) To do this, soak the potato in lemon juice to prevent it from changing color and attach them to the pumpkin with super glue.

How should I transfer my design to my pumpkin?

There are lots of ways to transfer jack-o’-lantern designs to your pumpkin. You can:

But Patenaude’s favorite way to transfer simple shapes to pumpkins for carving? Halloween window clings. “You can usually get a whole pack of all different ones at the dollar store or Target, and they’re a great tool to give general outline shapes,” she says. “If you want to do a pumpkin with bats all over it, you can put the jelly sticky on and carve it out, and then move it to a new spot. You can create your own scene using tools like that.”

2. Tips for Carving Pumpkins with Kids

You might think cutting the top off the pumpkin is the best way to get to the insides, but Patenaude says it’s actually better to cut out the bottom. Cutting off the top actually compromises the integrity of the pumpkin’s structure. Patenaude’s tip for easily cutting out the bottom? Flip the pumpkin upside down into a big pot or bowl, so you don’t break the stem off (watch the video here for a demonstration).

Now that we have that settled, here’s a step-by-step guide for carving pumpkins with kids:

How can I involve my youngest kids in carving pumpkins?

First, Patenaude recommends having the whole family participate. That means waiting until the evening or weekend when both parents can help the kids carve their designs (or gather a group of your kids’ friends and their parents). Bottom line? Make sure there’s more than 1 adult to help all the little ones. And if you have older kids, encourage them to help their younger siblings.

What are the top safety tips for carving pumpkins with kids?

As with any activity where sharp tools are involved, it’s important to keep your kids safe. Patenaude shared these tips to minimize injuries:

How can I make my pumpkin last until Halloween?

There are a few things you can do. Because there’s an enzyme in pumpkins that helps them break down fairly quickly, Patenaude says, the best way to get your jack-o’-lanterns to last is to carve them in the week leading up to Halloween.

To kill bacteria, Chef Duey recommends dipping your pumpkin in a large container of bleach and water (1 teaspoon to 1 gallon mixture). Then dry off and brush on a solution of 2 Tbsp of vinegar and 1 tsp lemon juice to a quart of water.

Once your jack-o’-lanterns are carved, the challenge is keeping the animals from snacking on them. Patenaude usually relies on spices and natural oils to repel insects and animals rather than chemicals. Orange oil will help deter bugs, while chili powder will deter larger animals.

And rather than leaving the pumpkins outside overnight, bring your jack-o’-lanterns inside and put them in the fridge (if you have room) or a cooler or insulated bag with ice packs. This will keep them cool and prevent them from decaying.

For higher quality tools you can reuse each year, try Messermeister’s 3-Piece Pumpkin Carving Set from Williams Sonoma ($29.95). It comes with a pumpkin scraper, sawtooth carver, and an etching tool. Or for a budget-friendly option that comes with stencils, LED tea lights, and a variety of tools, check out this Halloween pumpkin carving kit ($9.99).

You could also check out a Pumpkin Punchers set. For about $20, you’ll get a collection of mix-and-match “cookie cutters” that work on pumpkins.