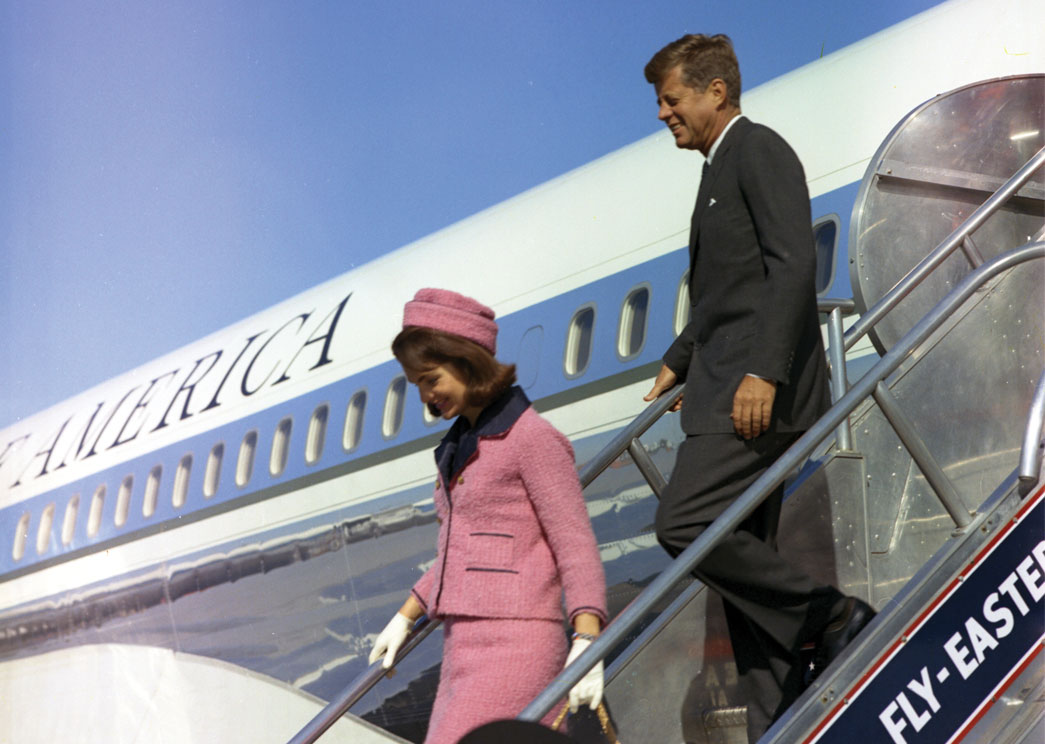 This Thanksgiving, inspire a newfound gratitude for the 35th president of our nation, John F. Kennedy, in your little history buffs. After all, the anniversary of his death falls on the day before Thanksgiving, and Dallas-Fort Worth was ground zero on that historic day.

Take your kids for a tour of the president’s route through North Texas; along the way, kids learn about one of our country’s great leaders and get up close to the exact spot he gave his last public speech, landed in Dallas, and eventually was shot. While the historical bits of this tour are best suited to grade schoolers, there are plenty of preschooler-friendly stops to keep restless littles entertained too. Bonus points if your kiddos memorize Kennedy’s famous words: “Ask not what your country can do for you. Ask what you can do for your country”—words of wisdom to truly be thankful for this year.

To get more from your tour, download the JFK TOUR DALLAS app for iPhone and iPad, which allows families to dive deeper into the history of wellknown and not so well-known sites with videos, images and intel. Also, try your hand at the Conspiracy Quiz. Available for $0.99 from the Apple App Store. Android users, keep your brains (and your competitive kiddos) busy with the JFK Walking Trivia Tour app. At each site, choose easy or advanced quizzes to test your family’s knowledge of key historical figures, including the architects who designed memorials to Kennedy. Download for $9.99 from Google Play.

No Faint Hearts in Fort Worth

If you’re dedicated to driving JFK’s entire route through Dallas, you actually have to begin at the Hilton Fort Worth, formerly known as the Hotel Texas, where Kennedy gave his final public speech before flying to Dallas later that morning. Thousands of Fort Worthians gathered in the cold rain to hear Kennedy speak, and because of their dedication, he greeted them with the famous words, “There are no faint hearts in Fort Worth.”

The parking lot where Kennedy spoke is now General Worth Square, and in 2012, the city unveiled a memorial to the president. To get the most out of the JFK Tribute in General Worth Square, send your kiddos on a scavenger hunt of the bronze plaques and etchings. They’ll have to skim the text to answer questions: What was the name of Kennedy’s wife? Can you find his signature? In which war did he serve? What does the “F” stand for in his name? What did he call the “common enemies of man”? (Hint: There are four.) Why did he say “There are no faint hearts in Fort Worth”? Before leaving, take a family portrait with the 8-foot-tall bronze statue of the president himself.

Pro tip: You can bend the timeline by starting your tour in Dallas and ending at General Worth Square after the sun sets. At night, the pictures and plaques light up around the glowing statue of Kennedy, making for a magical and reverent experience. Recap your day and warm up over a cup of seasonal hot cocoa from Schakolad Chocolate Factory just four blocks south.

Stop No. 2 along the tour is Dallas Love Field. The first couple hopped aboard Air Force One for a 15-minute flight from Fort Worth to Dallas; but, without a personal jet, it will take you 45 minutes along Highway 183. Stretch your legs at the Child’s Play Playground next to Bachman Recreation Center. Here, you’ll have a front-row seat to planes taking off and landing at Love Field, plus the kids can play pilot on the spring-loaded Southwest airplane bouncer.

Then take in all things aviation at the Frontiers of Flight Museum, where kiddos can see all the gadgets inside the cockpits of two reconnaissance aircraft built during the Cold War era: the Blackbird and the Phantom II. Explain to your kids that during Kennedy’s presidency, countries were developing weapons that had the potential to wipe out entire countries. These planes were built to help defend against a calamity of that magnitude, and Kennedy did his part by championing the Limited Nuclear Test Ban Treaty between the United States, the Soviet Union and Great Britain in which the countries agreed to stop testing nuclear weapons.

Kennedy was the leader of our country during the civil rights movement as well. Around the time of the March on Washington in 1963, he sent a bill to Congress that eventually passed as the Civil Rights Act in 1964. But citizens like the Tuskegee Airmen, the U.S. military’s first African-American pilots, had long been fighting for equality. Get a glimpse of their history by browsing artifacts, uniforms and even comic book–style illustrations of these World War II pilots’ exploits.

The cockpits and the artifacts are for display only—no little hands allowed—but curious preschoolers can touch the knobs and buttons inside a mini control tower, pretend to fly a jumbo-size plane and climb the treehouse playhouse, all in the Children’s Discovery Area.

After arriving at Love Field, President and Mrs. Kennedy climbed into the back seat of a convertible to be escorted through downtown Dallas to the Dallas Trade Mart. Follow the route the motorcade took down Lemmon Avenue. Turn right on Turtle Creek Boulevard, left on North Harwood Street but make a pit stop at Klyde Warren Park. On Tuesday mornings from 10am–noon, the lawn at Klyde Warren Park is strewn with life-size foam blocks from Imagination Playground that kids can use to build fortresses or design obstacle courses.

When you finally make your way to Dealey Plaza, you’ll notice a special reverence about the place—another reason to get the kids’ wiggles out before arriving at the site of Kennedy’s assassination. Park in the lot next to the red brick Sixth Floor Museum (formerly the Texas School Book Depository) then safely cross to the infamous grassy knoll between the museum and Elm Street. Be sure to look for the X that marks the exact spot on the road where Kennedy was shot.

From the hill, take in an eyewitness’s perspective of the events of that day. Shots came from the Texas School Book Depository and, some claim, from the picket fence behind the knoll. In fact, the staggering number of eyewitness accounts that couldn’t agree on where the shots originated has led the term “grassy knoll” to be synonymous with suspicion, conspiracy and cover-up.

Speaking of cover-ups, the Sixth Floor Museum houses archives of conspiracy theories, audio recordings, crime scene photographs and video footage of the day. (If you have preschoolers in tow, we recommend giving the museum a pass—it’s really best for kids 10 and older.) Visit the permanent exhibit, Memory of a Nation, to see a re-creation of the room where it is believed that Lee Harvey Oswald was stationed when he fired the shots. To get the most out of your visit, ask for the youth version of the audio guide included with admission ($16 per adult, $13 for ages 6–18 and free for children 5 and younger).

Spend a minute at the John K. Kennedy Memorial one block east of Dealey Plaza. Built by renowned architect Philip Johnson, the 30-foot-high square structure evokes an empty tomb, symbolizing the freedom of Kennedy’s spirit. Ask your kids what other features of the monument make it feel like this: Is it the granite square in the middle of the floor that’s reminiscent of a tombstone, or is it the fact that the walls muffle the city noises? Why isn’t there a roof? Explain that Johnson meant for the monument to give the illusion of floating between earth and sky—in fact, it’s supported by only eight small columns.

Once you come back down to earth, drive down Houston Street to Jefferson Boulevard for the next stop: The Texas Theatre, where Lee Harvey Oswald was arrested about 70 minutes after the shooting. You and the kids can take a tour of the 1931 building and see the spot where Oswald was put in cuffs … kind of. Since his arrest, the theater has undergone several renovations, so you won’t find the exact seat where Oswald was perched (although they are th  original seats), but you will see how he snuck in without buying a ticket and the approximate spot where Dallas police officers arrested him. Head upstairs to view the original poster for War Is Hell (the movie Oswald was watching when the law found him) signed by Johnny Brewer, the nearby shoe store manager who witnessed Oswald sneak in and alerted a woman in the box office to call the police. A $10 donation is requested for parties of up to four people. Email info@aviationcinemas.com to schedule a tour.

To celebrate the end of your JFK Tour, reward your kiddos with a trip to Wild Detectives bookstore and bar in the Bishop Arts District, just a few blocks away from the theater. (If you plan your tour for Nov. 18, you may want to hit the bookstore before you set out—at 10:30am, the craftsman home-turned-independent bookstore hosts Kids in the Cliff, a monthly storytelling hour in their cozy nook furnished with lots of pillows and a padded bench. This month, kids will hear Dragons Love Tacos.) While the littles grab a book from the modest children’s section, you can order a cup of joe and slice of Emporium Pies’ The Trifecta from the bar—seriously, the best of Bishop Arts in one place. Open from 10am Tuesday–Sunday and from 2pm Monday. 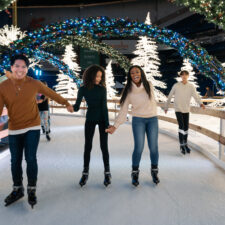