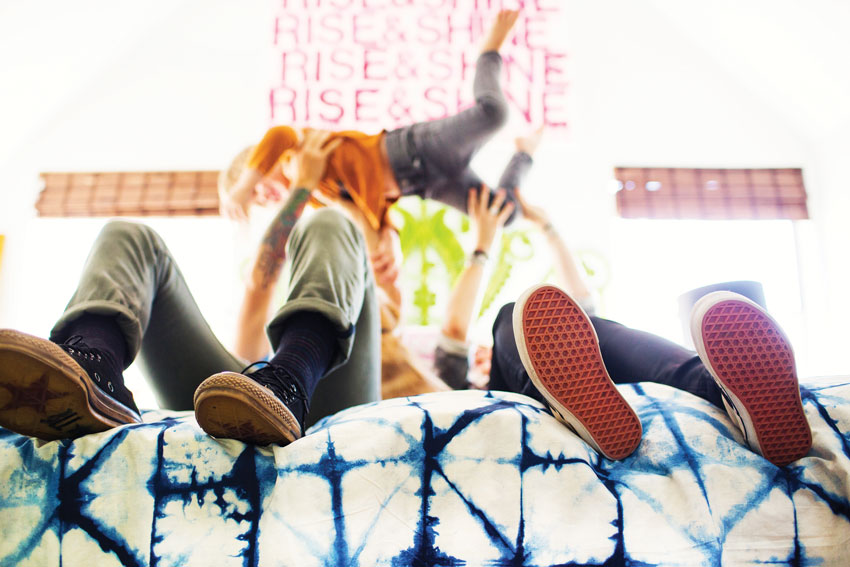 Jen Coleman knows a bargain. So when the 30-year-old style maven behind the hugely popular Target Does It Again—plus Costco Does It Again and online store Ascot + Hart—came upon a ramshackle ’70s house near Lake Ray Hubbard, she saw plenty of potential. She and her firefighter husband Caleb spent months tracking down the owner of the A-frame home in Rowlett, which had sat vacant for more than a half-decade. After nabbing “a crazy good deal,” the couple – parents to son Cove, 3 ½ – set about making it their own.

“We gutted the house, redid all the bathrooms, replaced the roof – and it’s still a work in progress,” she says, noting that she and Caleb did much of the work themselves. One of their first efforts centered around scraping off the popcorn ceiling, complete with glittery gold flecks. The ceiling is so tall, they had to bring in scaffolding. The shag carpet – bright red in one room, teal in another – also disappeared, replaced by wood and tile.

The Colemans then turned their attention to the neglected exterior. They rebuilt the deck and made it safe for Cove, who was an infant when they bought the home. Today, the trio spend much of their family time outside biking, skateboarding and exploring the trails of the nature preserve across the street.

When indoors, they tend to linger in the living room, which Jen painted white with pops of color, including the bright blue fireplace mantel. “I have to keep the background white because I have some really loud furniture,” she says with a laugh. First among those vibrant pieces is a hot pink sectional given to her by Polyphonic Spree frontman Tim DeLaughter and his wife, Julie, for whom Jen used to nanny. “It’s so huge that we can all fit on it,” Jen says.

She acquired most of her other furniture and accessories by scouring tag sales, estate sales and Craigslist. Among her favorite finds: a Bertoia Diamond chair by Knoll that she copped for a mere $50. “If I see a garage sale, I’m going to stop,” she says. “My husband, who’s got great taste and a good eye, likes stuff a little more minimal than I do. He says if I bring something new in, I have to take something out. At least we have similar taste.”

RELATED: How to Refresh Your Home For Less

In the upstairs master bedroom, a loft-like space that opens to the downstairs, Jen mixed an indigo-patterned West Elm comforter with an array of interesting pillows against an ornate lime-green headboard and graphic artwork. “I’m not afraid to bring in color or to mix old and new,” she says. The renovation of the kitchen, a project the Colemans tackled this fall, proves her fearlessness when it comes to color: She painted the cabinets a pretty shade of avocado green, a sly nod to her home’s era.

Target Lover Creates Her Own Brand

Between the rigors of mothering and resuscitating the property, Jen manages online shop ascotandhart.com with partner California-based Laura Wiertzema, as well as post twice weekly on the various social networking sites associated with Target Does It Again, which in a year has lured more 1.4 million followers. “My partner [Laura] and I started by posting fun stuff on our personal Instagram accounts, mainly for each other, and it took off,” she says. Both moms routinely post selfies capturing outfits they’ve assembled from the store’s racks. Even Target has taken note, flying Jen and Laura twice to New York City for special events.

“We walked into one party, and Nate Berkus came running over to us, saying, ‘The girls are here!’” she says. “We were stopped by people in Times Square and SoHo. I had no idea it would ever be this big.”

While she’s clearly enjoying her newfound celebrity, Jen Coleman’s heart remains at home. “I love this place,” she says. “It’s such a good fit.”

Editor’s Note: This article was originally published in November 2013.