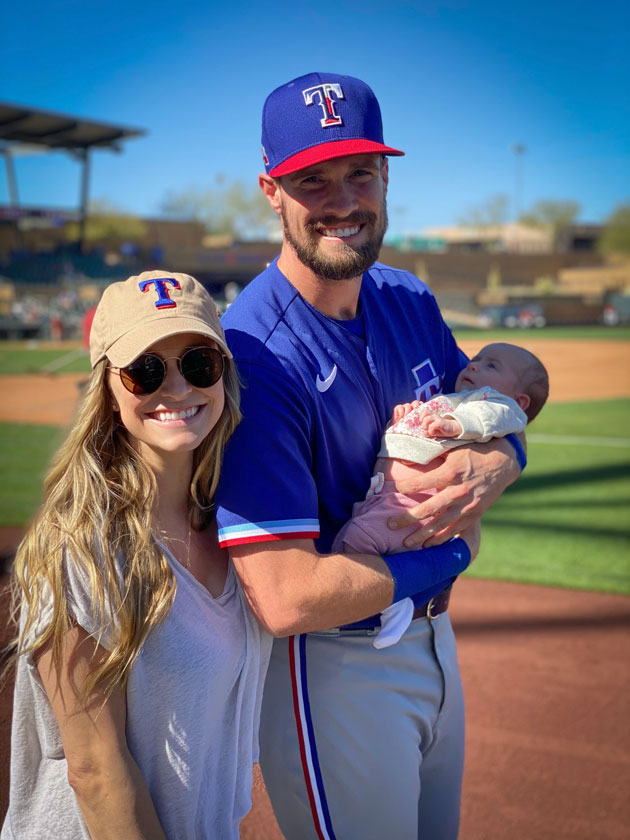 Jacquelyn Dahl is the ultimate cool girl. She runs her own sports marketing agency (maybe you’ve heard of her client, Patrick Mahomes), played tennis on the collegiate level and is never spotted without a megawatt smile. Dahl—the wife of former Texas Rangers player David Dahl, now signed with the Milwaukee Brewers organization—has a busy life, between her work through 1UP Sports Marketing, her husband’s career and, now, motherhood. Daughter Parker Raye was born in January 2021 and is already her mom’s “sweetest sidekick.” 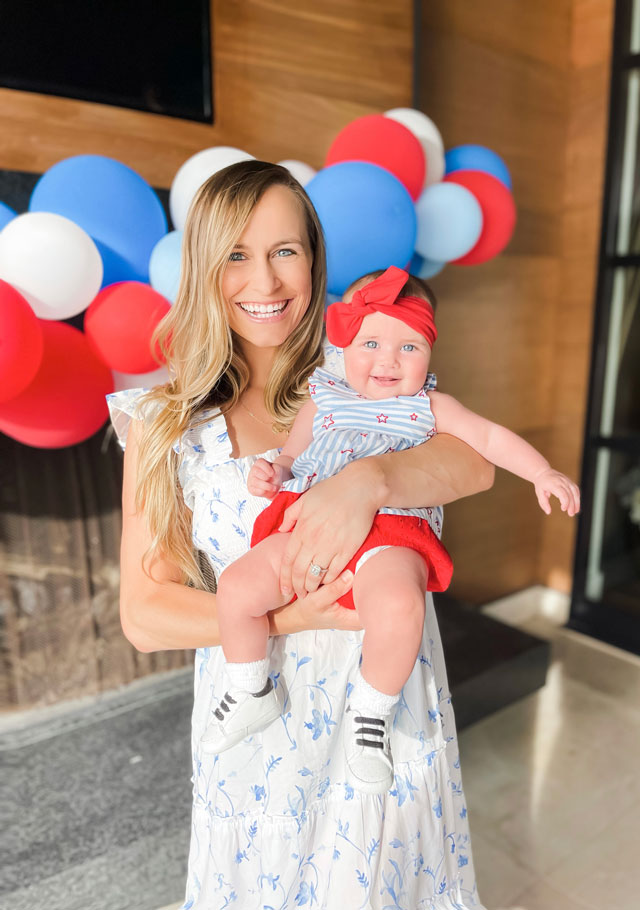 We caught up with Dahl over Zoom, as her dog Rookie—who has his own Insta, @rookiegolden—happily wandered in and out of the room. (“He just got a bath,” Dahl laughs, “and he wants to show off.”)

DFWChild: You went to college at UC San Diego, spent years in Colorado when David played for the Rockies, you have a home in Scottsdale, recently put your North Texas home on the market, and your husband’s career could take him anywhere at any time—what feels like home?
Jacquelyn Dahl: I’m definitely a Texas girl, so I’m pretty biased. I grew up outside of Houston, in Clear Lake City. I think [Texas] is a perfect place to raise a family, and when we were looking to buy a house, it was very hard to find a house because so many people are moving here. The schools are amazing. The people are amazing. The communities here are amazing. Now that I’ve traveled the country for work and we’ve lived in so many different cities, I know Texas is truly one of a kind. I understand why everyone always comes back here.

Right now Parker and I are in Scottsdale waiting for Dad to get home from the long season. The baseball life is completely unpredictable—I always say to David, “Home is wherever we’re with you”—but could see Texas being home again one day with all of our family being so close.

C: Congratulations on your baby girl! She is adorable. How did you come up with the name Parker Raye?
JD: It’s funny, I only ever thought of boy names. I don’t know why. I guess just being in sports and baseball, I was always like, “We’re going to have little boys running around.” But I love boy names for girls. I had some other ones in mind that David just said, “No. That’s way too much. I have a teammate named that. I can’t do that.”

We were actually driving in Colorado, and there’s a town called Parker. It’s right outside of Denver, and I saw that exit and was like, “That’s a cute name.” When we found out it was a girl, we looked at each other and were like, “I think her name’s Parker.” Then Raye is a family name—my grandpa’s name and my sister’s middle name.

C: In addition to being a mom, you’re also an entrepreneur. Tell us more about what you do.
JD: I don’t handle anything on the field for athletes, just off the field. If you see Patrick Mahomes in a State Farm commercial or a Heads & Shoulders commercial, that’s our doing, and if you see Danny Amendola doing a feature for Architectural Digest in his new house in Austin, that’s our doing too. Really a wide range of things, and it’s exciting, too—as I’ve grown and as my clients have grown, I’m also working with the families. I work with Patrick Mahomes’ fiancée, Brittany, who is incredible. She’s a social media superstar fitness trainer, and getting to work with a lot more female-focused brands is really fun, as well. Brittany’s a new mom, too.

C: Has Parker had a play date with Patrick and Brittany’s daughter Sterling?
JD: Yeah, we had a pool day yesterday, actually. Patrick jokes that they’re only a month apart, but Parker looks like she has two years on Sterling, because Parker’s just really long and Sterling’s like so sweet and cute and little. They’re going to be little grown-in besties because we travel so much together.

C: How did you get started in sports marketing?
JD: I studied business and media communications. It’s not what I originally went to school for—I remember going and visiting UC San Diego and it’s right on the coast, and I was like, “I want to do marine biology.” I learned pretty quickly, though, what I actually wanted to do. I’ve worked in sports since college.

I was networking like crazy, and I interned for different teams and for Fox Sports. I kind of found my calling in helping athletes. I was friends with a lot of athletes. Obviously I was dating David, and I knew there was a niche for helping these athletes off the field. They have their contract agent who negotiates their contract with the team, and then there’s this whole other area.

Social media was growing and guys were really looking to build their brand off the field. I started doing that kind of on my own and was bringing endorsement deals to a few players. An agent out of Houston kind of caught wind of what I was doing and recruited me.

So I went to Houston, worked for a big NFL sports agency for about three years, and then about three years ago, I started my own company specifically doing marketing endorsements and brand management for professional athletes. 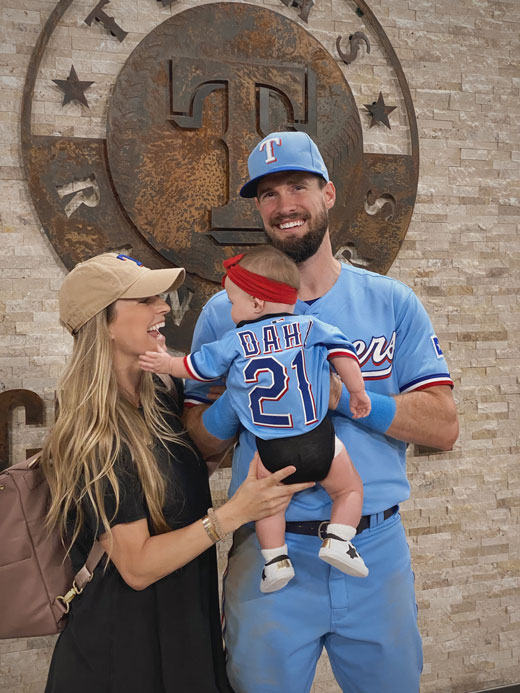 C: Were you able to take some time off after Parker’s birth?
JD: I tried. I have a couple of employees, and they were very adamant about building out a maternity plan for me so I would actually step away for a little bit. Honestly, going into it, I was like, There’s no way. I had Parker the week before the Super Bowl and my client [Mahomes] was playing in the Super Bowl. I’m thinking, This the biggest time of the year. There’s no way I’m going to be able to step away—but I did. Thankfully, my team helped me through it. But yeah, it’s hard when you own a business; there’s really no maternity leave package. If you work, you work, and if you don’t, you don’t, but business has to keep rolling.

C: Seeing David with Parker has to make you love him on a whole new level.
JD: It really does. It’s literally the cutest thing ever, a girl dad. It’s just changed our lives so much for the better. We have pretty high-stress jobs, but at the end of the day, getting to have time with Parker and be together, David just forgets about baseball. He comes home and it’s, “How’s Parker? What did she do today? Anything different?” It’s just a whole different thing now. It is very attractive to see your good-looking husband with a little baby girl.

C: Your family photos on Instagram are truly picture-perfect—but considering how busy you and David are, there have to be chaotic days too.
JD: Oh yes. There are many more of those. Instagram’s a highlight reel—there are definitely some tougher sides. It’s like the mental drainage of being a mom. People don’t really talk about that much. And there are days where David is going through a slump at the field and having a tough time, and something crazy is going on at work, and then I’m like, “Wait. The most important job is for me to be stable and ready for Parker.”

There are plenty of challenges, that’s for sure. We’re all just trying to figure it out, and I’m learning that more and more. I’ll ask other mom friends for advice on something, and they say, “I don’t even know.” You look at everyone else and you think they all have it together, and it’s like, no. We’re all just kind of a mess inside!

C: I’m sure there are some misconceptions out there about players’ wives—that the lifestyle is more glamorous than it is.
JD: While I have a very different life than a lot of the other wives, I think player wives kind of get a bad rap. Oh, you’re just along for the ride and it’s so easy. But every single day, you don’t know where you could be the next day. You don’t know if he has a job the next day, plus, it’s a mental roller coaster for him. It’s a mental roller coaster for us.

Just when you think you’ve bought a house and planted your roots somewhere, you could be traded. He packs up and has to be at the next team the next day, so your job is to pack up this entire house and head out also and meet him whenever you can. I think the crazy instability of it is not all that glamorous.

I’m not trying to have a pity party or anything because, obviously, it’s a very blessed life, too. We get to go to cool cities and go in the backdoor at games and stuff like that, and your kids get to experience going to the ballpark, but—my dad [a pro hockey player] actually taught me this—it’s a very small portion of your life. If you’re lucky and you get 10 years, that’s only 10 years of your life with your husband. There are so many more years beyond that.

C: What do you want Parker to learn from you as a working mom in what I assume is a male-dominated field?
JD: It was. When I started, it was definitely male-dominated. I mean, it still is let’s be honest. But I think it’s [diversifying], and that’s a big reason of why I put so much of like my life and my work on social media. I want other girls to know that you can do this job, too. I feel like so many young girls who want to work in sports, they think that the only job out there is being a reporter. That’s an awesome gig, but a lot of girls go down that route because they think that that’s how they can get into sports. There are so many other jobs that I think women are even better at.

[In terms of Parker,] I hope she is proud of me and that I can be a role model for her and for other girls.