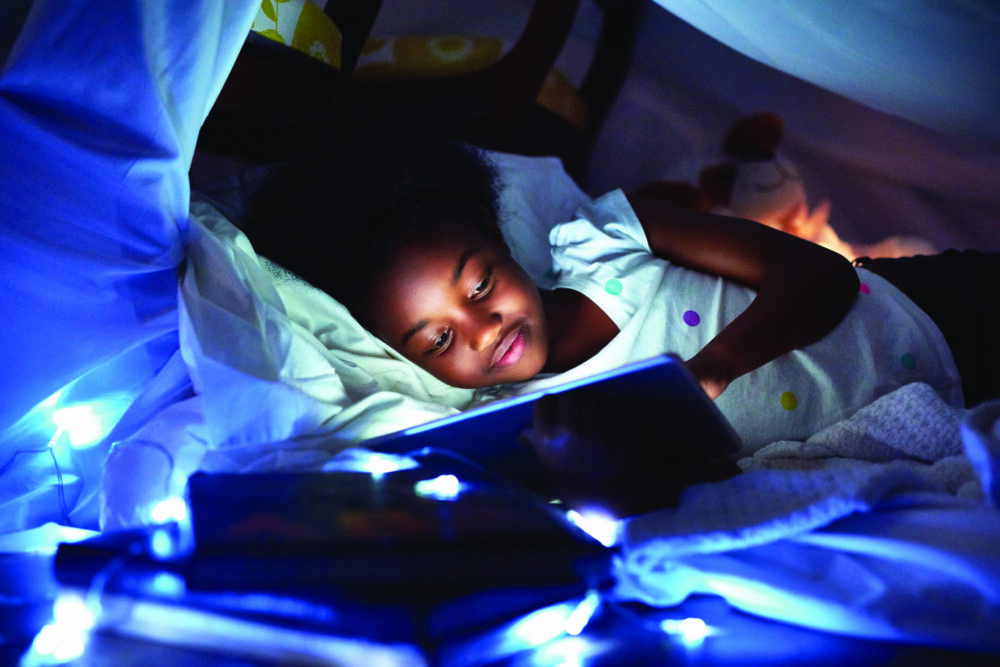 Take a peek into the home of most North Texans on any given evening, and chances are you’ll see faces awash in a faint bluish glow, called blue light—Mom and Dad doing one last email or social media check and the kids squeezing in a final video game, sitcom or movie before bedtime.

Or, if they are procrastinators like my own children, they may be finishing up homework on a school district–issued Chromebook—the same one they’ve been staring at all day in school. Even if all the gadgets and gizmos are off for the night, fluorescent and LED household lightbulbs—even that new flat–screen—emit brighter short-wavelength blue light than those old-fashioned incandescent bulbs ever did.

So in recent years, attention has turned to the effects of light pollution on our eyes, with short-wave blue light as the primary concern. We’ve all seen the articles, news segments and blog posts about the perceived dangers of blue light, but, truth be told, the long-term consequences of blue light exposure in children are not well understood. That’s why we decided to shed a little light on this subject (pun intended) and cover what we do know now.

Is Blue Light That Bad?

Turns out this high–energy blue light passes through the cornea and lens to the retina, and that can cause problems such as dry eye, cataracts and age-related macular degeneration, according to a late 2018 study published by the International Journal of Ophthalmology. But not all ophthalmologists are sounding the alarm.

“There is blue light spectrum in most ‘white’ light, including sunlight,” says Dr. Serena Wang, a pediatric ophthalmologist from Children’s Health and associate professor at University of Texas Southwestern Medical Center. “As best as we can tell, blue light is not different than exposure to light itself,” she says, citing an article recently published online by the American Academy of Ophthalmology, titled “No, Blue Light From Your Smartphone Is Not Blinding You.”

As that title suggests, and as Wang puts it, “There is no good evidence that blue light is harmful to the eye itself or vision.” The article says that concerns raised by recent research out of the University of Toledo and in Scientific Reports is “alarmist.”

“Using a device at bedtime can delay sleep and can affect REM sleep and simply make it more difficult to get your child to calm down.”

“During the day, blue light wakes us and stimulates us,” says Dr. Cynthia Beauchamp, managing partner of ABC Eyes, a pediatric ophthalmology practice with offices in Grapevine, Dallas and Plano. “But too much exposure to blue light at night can make it simply more difficult to get to sleep.”

With that, she hit on one of the greatest concerns parents have about screen time: While we may not be going blind from staring at our cellphones all day, what concerns many already sleep-deprived parents is their child’s brain stimulation. Turns out blue light may inhibit melatonin secretion levels, which affect sleep quality.

“Using a device at bedtime can delay sleep and can affect REM sleep and simply make it more difficult to get your child to calm down,” Beauchamp explains.

So what’s a parent to do? Simple solutions, based on the age of the child, make the most sense. “With little children, up to a year or two in age, I just advise that they don’t use devices at all,” Beauchamp says. For young school–age children, the American Academy of Pediatrics recommends less than half an hour to an hour a day of screen time, in part to give kids the opportunity to get up from behind a computer for cardiovascular exercise, she says. That’s something everyone can agree on.

And what about those older kids like mine, who tend to be finishing homework late into the evening? “Definitely putting away the device an hour before bedtime is absolutely reasonable,” she says. Truthfully, being “reasonable” seems to be the answer to our questions surrounding blue light. Like most things in life, “everything in moderation” applies here as well.

If your children spend too much time in front of a screen, that can keep them from blinking as often as they should, which may make their eyes feel dry, gritty, tired or strained. The simple solution is to have them look at least 20 feet away, for 20 seconds, every 20 minutes. Ophthalmologists call this the “20-20-20 rule.” Other minor adjustments can help too:

Lighting: Keep the room softly lit. The biggest troublemakers are light sources above or behind the screen, including fluorescent lighting and sunlight. Turn off some or even all of the overhead lights.

Glare: Lower blinds and shades, and be sure the screen isn’t positioned directly in front of a window or white wall. Consider anti-glare covers for your devices.

Screen settings: Enlarge the type to make reading easier for little ones, and be sure to set the brightness and contrast to comfortable levels.

This article was originally published in November 2019.