How To Introduce Your Kids To The Theater - DFWChild 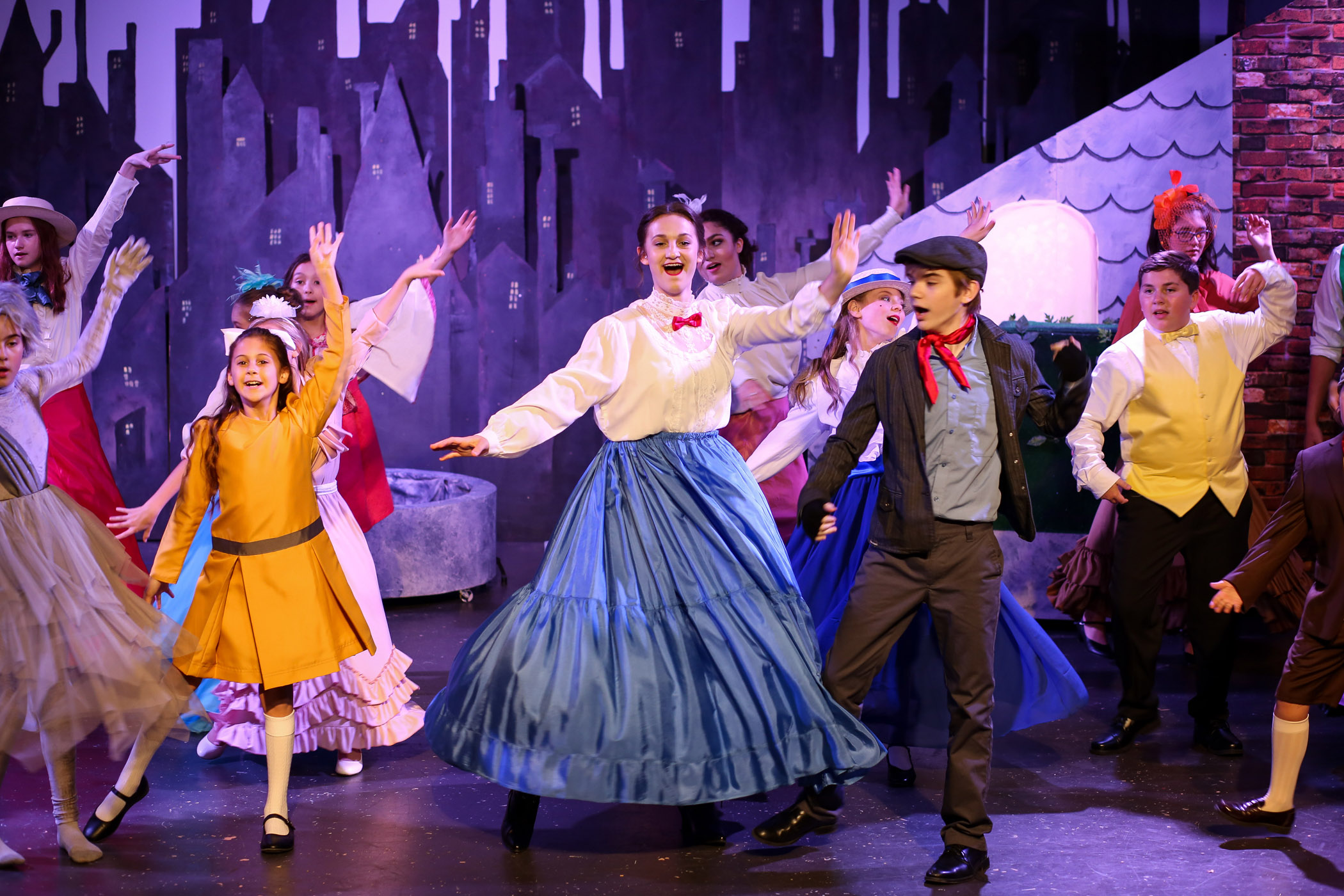 Your 6-year-old yelling out, “Where is baby Jesus?!” as soon as the lights go down for The Nutcracker is probably similar to what you imagine when you think about taking your kid to the theater. That was the scenario for Mollie-Claire Matthews’ family when they took her little sister Madigan to her first show at 6 years old. But the despite Madigan’s spontaneous outburst, Mollie-Claire looks back fondly at the memory.

“It doesn’t always work for everybody, but that is such a funny story to have to tell,” says the high school senior. Mollie-Claire saw her first play––a classic, The Sound of Music––at just 3 years old. She’s been part of the programs at North Texas Performing Arts ever since.

Mollie-Claire believes that watching a play at such a young age and taking classes throughout her life has given her far more than stage or acting techniques—it’s built a foundation for lifelong skills.

“If I didn’t have theater, there is a certain confidence I wouldn’t have walking into a room,” she shares. “It teaches you so much about knowing who you are, and I think that’s really hard for lots of kids.”

Lizdelia Piñon, a Crowley mother of 6-year-old triplets who all have cerebral palsy, has taken her kids to plays since they were toddlers. The Chicago native and educator sees the importance of involving her kids in the arts at a young age––something she had growing up as well.

“I wanted them to enjoy all the things that my parents did with me as a child,” Piñon says. “My kids see things a little differently, I think, because of the arts that I’ve exposed them to.”

Although the thought of taking your kids to the theater might be scary, with the right preparation your littles can enjoy the wonders of live theater while picking up lessons and memories that will stick with them long after the curtain call.

Take baby steps toward introducing your kids to theater. Piñon began by showing her kids 30- to 40-minute movies to see if her then 2-year-olds could stay focused for that length of time.

“That’s when I realized, OK, they can do a 30-minute cartoon, they are ready to [watch] a play,” she says. “It wasn’t easy, there was a growing curve. But I feel like now they really appreciate it, they love going to plays.”

Libraries are also great resources to begin introducing your kids to plays; several local libraries have puppet shows and short skits for toddlers and babies. When Piñon began introducing her kids to plays, it was about “trying to find stuff that was a lot less intimidating.”

When your kids are ready for a real theater, look for plays labeled TYA, or Theater for Young Audiences. These plays are designed specifically to keep kiddos engaged, explains Mike Mazur, managing director at North Texas Performing Arts in Plano. “They encourage the kids to cheer and boo for the villain and the hero,” he says.

Also look for musicals with “Jr.” in the title. These are shortened versions of stories you know and love, typically with kid actors.

If the play is based on a movie or book, watch the movie or read the story with them so they’ll already be familiar with the characters and plot. Often the stage version of the story is a bit different from the movie or book. “When you come to see a play, say ‘We’re going to see it live. I can’t wait to see what’s the same or different,’” Mazur says.

Communication is key when introducing something new to your kiddos. Mazur recommends talking your kids through what they’re about to experience. “Say, ‘We’re going to go see a play, and the play is done by real people right in front of you. We’re going to be quiet and watch them,’” he explains.

Since most plays have an intermission, Mazur also suggests telling your kids to look out for certain things during the first half of the show that you can discuss during the break—a certain dance move, the intricacies of the actors’ costumes. You can also tell the kids to watch out for lights and sounds and how they help tell the story: “‘Look—there’s a light over there.’ (It turns blue.) ‘How did that make the room feel?’ Guide them with things to look for,” he shares.

And remember, plays are just that: play. Mazur notes that adults often forget that taking their kids to see a show is supposed to be fun. “There’s nothing like watching a parent and two kids experiencing the performing arts together,” he says. “I really believe what we do brings families closer together in ways they didn’t expect.”

AT A THEATER NEar YOU

Take your kids to one of these upcoming shows:

Dallas Children’s Theater is showing Diary of A Worm, A Spider & A Fly June 14–July 7. The show is an hour and 15 minutes long with an intermission and is recommended for age 3 and up. Tickets are $30 for adults and $28 for ages 3–17. If you still aren’t sure about bringing your kids to a live show, contact Trish Long (trish.long@dct.org or 214/978-0110) to sit in on a performance and get a feel for it in person.

See marionettes perform The Little Mermaid at Geppetto’s Marionette Theater in Dallas June 8–September 22. Tickets begin at $20. Shows are about an hour in length and designed for kids as young as 3.

Shrek the Musical Jr. (June 8–July 13) and Beat Bugs (July 27–August 31) are playing at the Artisan Center Theater in Hurst. Shrek is recommended for ages 8–18 and Beat Bugs for age 10 and younger, though all ages are welcome to both shows. Both are about an hour long. Tickets are $13 for adults and $7 for ages 12 and younger.

Roald Dahl’s James and the Giant Peach Jr. is coming to the Denton Community Theater on July 26 and 27 at 7:30pm and July 28 at 2pm at the Campus Theatre. Recommended for age 4 and up. Ticket prices will be announced in the coming weeks; they typically range from $10–$12.

The Irving Arts Center is hosting Princess-Palooza, a marionette play inspired by Disney princesses, on June 18 at 11am, 12:30pm and 2pm. Runtime is 30–40 minutes; recommended for ages 2–12. Admission is free, but tickets are required and will be available one hour before showtime.

Beauty and the Beast Jr. is on stage at the Actors Conservatory Theatre June 20–23. The show is about an hour long, not including the 15-minute intermission. Recommended for age 5 and up. Tickets are $14 for adults and $9 for age 10 and younger.

Shrek the Musical Jr. (June 8–July 13) and Beat Bugs: A Magical Adventure (July 27–August 31) are playing at the Artisan Center Theater in Hurst. Shrek is recommended for ages 8–18 and Beat Bugs for age 10 and younger, though all ages are welcome to both shows. Both are about an hour long. Tickets are $13 for adults and $7 for ages 12 and younger.

Into the Woods will be showing at Theatre Arlington June 25–28, with daytime and one evening performance. The show is about an hour and 15 minutes long and is best for age 5 and up. Tickets cost $5–$10.

The Wizard of Oz is on stage at Casa Mañana July 12–14. The show is about an hour and 20 minutes long, plus a 20-minute intermission, and is recommended for age 3 and up. Tickets range from $17–$45 for all ages.

Or sign them up to go behind the scenes at a theater summer camp:

North Texas Performing Arts offers weeklong art and drama camps for ages 5–8 and theater camps for ages 7–11. Kids focus on a different theme each week, such as How To Train Your Dragon and The Lion King. Full-day and half-day options are available at the Plano, Frisco and Fairview locations; tuition begins at $225. Two-week production camps, where kiddos rehearse and put on a show, are also available at all locations; tuition begins at $250.

Kids in grades two to six can get a head start on high school lit at Shakespeare Dallas’ three weeklong camps that focus on acting, movement and vocal work. What Visions Have I Seen! (June 17–21) and Midsummer Madness (July 8–19) will held at Bishop Dunne Catholic School in Dallas, and All the World’s A Stage (June 24–28) at Genesis Children’s Theatre in Plano. Tuition begins at $215.

At The Art Centre Theatre, kids ages 6–17 can choose from weeklong camps beginning June 10 based on titles like The Wizard of Oz, A Midsummer Night’s Dream and The Sound of Music. Tuition begins at $350.

Denton Community Theater is offering a camp based on Roald Dahl’s James and the Giant Peach Jr. for ages 8–17. Dates are June 24–July 12 and July 15–July 28. Tuition is $450 for performers and $250 for tech assistants.

The Irving Arts Center is putting on two weeklong camps for first- to 12th-graders, the first focused on building a production and the second on performing. Dates are July 29–August 2 and August 5–9. Tuition is $210.

The Actors Conservatory Theater has a couple of two-week-long camps for ages 5–14 on the docket this summer: June 24–July 7 and July 22–August 4, themed around Alice in Wonderland and Aladdin, respectively. Tuition is $150 for junior campers (ages 5–7) and $250 for star campers (ages 8–14). Sibling tuition is at a discounted rate.

Your kids will be familiar with the themes at Casa Mañana’s weeklong, half-day camps for ages 4–8: Alice in Wonderland, June 3–7; Ferdinand the Bull, June 10–14; The Aristocats, June 17–21; and The Jungle Book, August 5–9. Tuition is $350 per week, plus a $25 registration fee. For older kids, the three-week-long Camp Casa starts June 24, where ages 8–14—from beginners to advanced—take daily classes in acting, music and dance set to a Wizard of Oz theme. Tuition is $1,100, plus a registration fee.

Kids Who Care offers theater camps, classes and workshops throughout the year. For the summer, opt for a one-week mini camp for ages 4–7 or the weeklong Actors Studio for grades one through nine to act out their favorite stories. Tuition is $295 for both camps. Two- and three-week options are available for kids in grades 1–12 to rehearse and put on public performances—the June Intensive runs June 17–30 and the international musical theater camp runs July 8–28 or July 15–28. Tuition begins at $750.

During Theatre Arlington’s musical theater camps for ages 7–11, kids will perform The Aristocats (June 10–14) and Cinderella KIDS (July 29–Aug. 2). Limited spots are available; tuition is $350. At the Play and Pretend camp July 22–26, younger campers ages 3–7 will learn about characters from classic children’s lit, in the past being Winnie the Pooh and Where the Wild Things Are, and put on a performance at week’s end. Tuition is $250. And the more technical side of theater is the topic of the Adventures in Theatre Camp that runs July 8–19 for ages 8–16; tuition is $425.