How to Apologize to Your Child - DFWChild 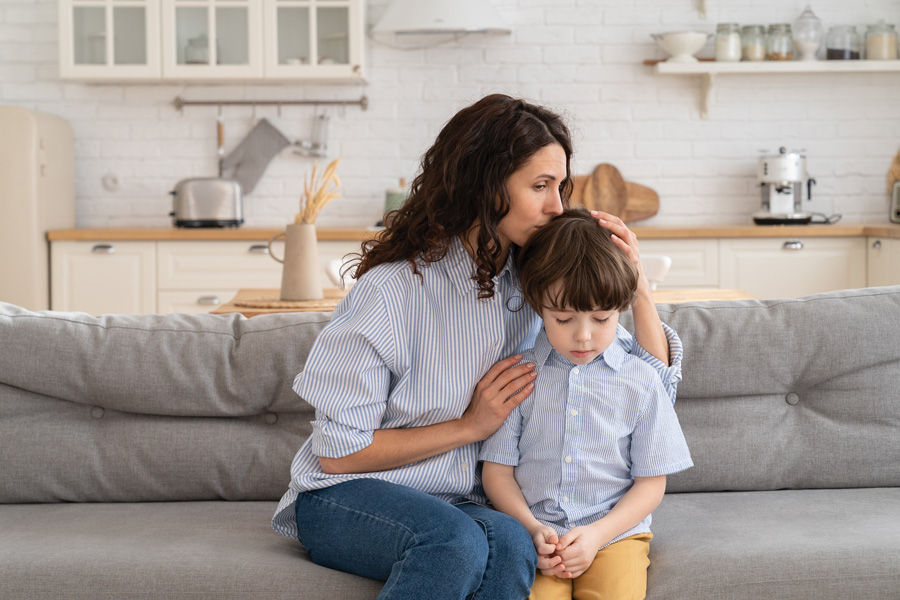 “Brylon, please, just stop talking to me for one minute!” The look on my son’s face told me immediately I had messed up. I was making the employee schedule for our restaurant and had already asked him to give me a second. Granted, I was already stressed. Just when I had my thoughts collected, I would hear, “Mama, guess what?” and lose my train of thought. I finally just exploded. It’s only normal to lose your cool every once in a while. However, how you handle the situation afterward—and apologize—is critical.

Be Genuine in Your Apology

Apologizing to our kids often comes with a stigma that we are minimizing our authority by admitting we messed up, but according to Dr. Meghna Joshi, owner of Child Psychiatry of Dallas, located in Allen, it actually models responsibility and empathy, not weakness. “Apologizing to your child is important in repairing that relationship,” says Joshi. “You’re teaching them early on that it’s okay to make—and then admit to—our mistakes, while also normalizing apologies.”

That being said, you don’t need to apologize for everything that elicits an emotional outburst from your child. “A parent should apologize when they have truly made a mistake—like raising their voice and scaring their child,” says Janis Harris, a retired Fort Worth principal. “Even accidental situations, where they made a promise they couldn’t keep that was out of their control, or accidentally ripped their child’s favorite blanket—that’s when an apology is warranted, not because the child didn’t like whatever choice the parent made.”

However, there is a specific way to apologize. Frances Opara, a behavioral analyst at Texas ABA & Child Development Services in Garland, says you must be explicit and to own up to it. “Saying the words, ‘I am sorry for doing XYZ and for making you cry,’ lets them know you understand where you crossed the line and are remorseful,” she says.

Harris adds that she taught her students to apologize the same way she believes adults should: “I am sorry that I (the offense). I know that I (admit mistake/hurting feelings), and I will (what they should have done instead) next time.”

It’s more than just filling in the blanks, though. “Like adults, if a child witnesses you apologizing for the same behavior over and over, they won’t believe it,” Joshi explains. Saying the words “I’m sorry” is key, otherwise your words can be misinterpreted or not feel like an actual apology, she says.

Acknowledge and Validate Their Emotions

After I snapped at Brylon, I asked, “Did I scare you when I got loud?” He burst into tears and hugged me while nodding his head yes.

“An important part of a child receiving your apology is recognizing how they experienced whatever it is you’re apologizing for,” Joshi says. “Cool off, and then ask your child, “How did it make you feel when I lashed out?’ or ‘Were you mad when I got upset with you?’ Asking how they felt shows that you really care and are remorseful about the situation.”

When we take responsibility for our actions, we are telling our child that they are important to us.

Opara says it’s also important not to lose your cool (again) if your child reacts poorly to, well, your own poor reaction. “Big emotional situations illicit big emotional responses, but you never want to make your child feel bad about feeling bad,” she says.

“Something I always suggest to my parents and therapists is to let the child know what they can do versus what they can’t. Instead of saying, ‘You can’t yell at me like that when you’re mad,’ try saying, ‘When you feel this upset, you can scream into your pillow or throw a ball outside.’ Giving them an alternate action that they can do instead feels less like reprimand and more like validation.”

Harris adds that when we take responsibility for our actions, we are telling our child that they are important to us. “When we seek to understand the impact of our actions, as well as make amends to our children, we are communicating to them that their emotions matter, and so do they,” Harris says.

Joshi also adds that it’s important for parents to take responsibility for whatever they said or did. “Don’t use the words but or if in your apology,” she says. For example: “I’m sorry I said that, but…” or “If you hadn’t done XYZ, then I wouldn’t have…” She says that trying to explain away or excuse your mistake mitigates the sincerity behind your apology.

It is important to express your remorse for your action and words, but don’t be surprised if your child isn’t immediately ready to remedy the situation. “Much like adults, when a child has been hurt, they may need some time to cool off to truly accept your apology,” Harris says.

Joshi agrees that occasionally your child may not be ready to forgive you right away—and that’s OK. “Give them some space, and when some time has passed, ask how you can make it up to them,” she says. Pursuing their forgiveness demonstrates that it’s important to make those amends and that you still love them despite their resistance to accept your apology.

At the end of the day, kids are still impulsive, little creatures that know which of our buttons to push, and parents are still humans who become frazzled at times. While we never intend to say or do anything hurtful, we need the know-how for the times we slip up. Modeling genuine apologies to our children shows them how to build and maintain healthy, positive relationships with others.

Besides, the snuggles afterward far outweigh any shame of admitting that we goofed. I promise.