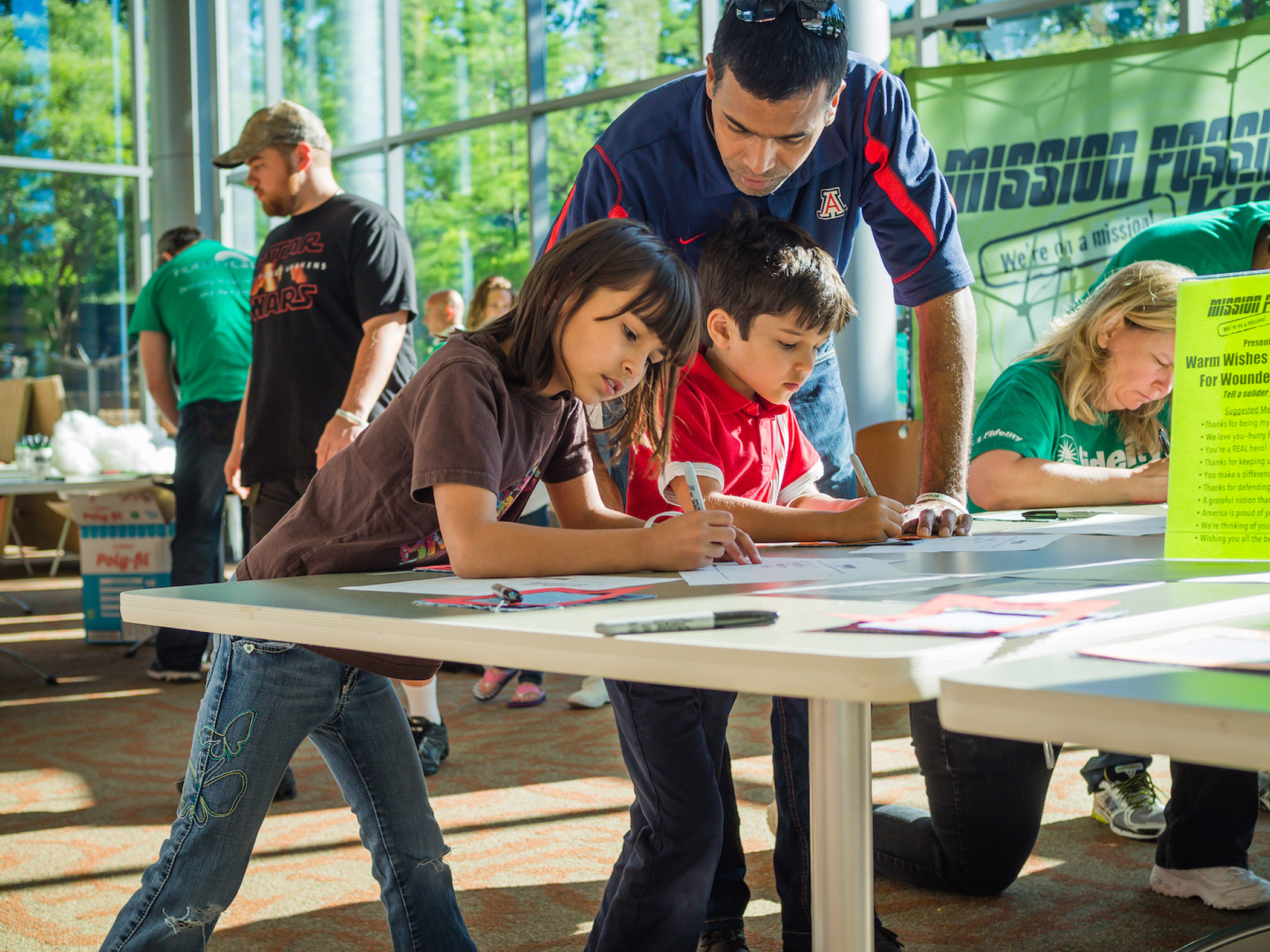 When he was 4 years old, Plano resident Kathy Meadows’ son discovered a love for service. He and his mom began delivering candy canes and greeting cards to 100 neighbors during the holidays, and the “Candy Cane Kid,” as he was dubbed, soon became eagerly awaited every year. He continued to make those annual rounds until the year before he left for college. But the Meadows’ tradition of giving didn’t end––local parents asked how their young kids could follow suit. So in 2003, Meadows and her son founded Mission Possible Kids (MPK), a nationwide nonprofit that gives elementary-age kids a chance to volunteer. We talked to Meadows about MPK’s impact and how parents can get their own kids involved.

Meadows says the best way to get involved with Mission Possible Kids is to start your own local chapter—this can be at your child’s school, your church or a nearby nonprofit. Inquire about starting your own group online, or ask about the groups nearest you (there are about 20 in Dallas-Fort Worth) so your kids can begin their own top-secret missions.

CollinChild: What motivated you to start Mission Possible Kids? Kathy Meadows: My son was the catalyst. When he was 4, he had this heart for wanting to give back, but no place in town would let us because [of] insurance liabilities and [other] reasons. The doors were constantly closed, yet I knew that was the age when kids are most teachable. When a child is showing interest in doing something that is important, you don’t say, “No, you have to wait until you’re a teenager.” I started coming up with projects of my own that I felt different charities could use. Inevitably, as soon as we would get there, [they’d] go, “Oh, this is really cool, yes, we could use that! Can you do more of that?” I saw over a period of several years how much [my son] was affected by that, I was affected by that, the charities were helped by it. One day when he was just about to go into third grade I had this epiphany for Mission Possible Kids, where kids got to be secret agents doing top-secret missions to change the world. We knew we hit on something that people wanted from the get-go. I knew what it was like for parents trying to find ways to teach their kids by doing good things––the society just makes it very difficult for kids to do that.

CC: Why do you think that is? KM: First and foremost, I think it’s insurance liability. The other thing is that nonprofit people are very busy…. Unfortunately, it’s very shortsighted because we’re missing a full decade of being able to turn kids on to service.

CC: What has the response been of the organizations you’ve helped over the years? KM: Oh, it’s always positive! With my first group of kids, I saw an article in the newspaper about a Dallas food shelter in crisis. The holidays were not far away and their shelves were almost bare. I lined up three different grocery stores to allow our kids to pass out wish lists to customers going inside. People wanted to help when they understood it was for an emergency crisis at a food bank, and that these kids were spending their Saturday helping. They ended up raising enough food [to] stock that food bank through the entire winter, not just for the holidays.

CC: And how has this organization had on impact on the kids? I imagine it has built their confidence. KM: Absolutely. I’ve seen little kids who were so shy, they wouldn’t even come out behind their mom’s skirt. Once they got involved in doing something they forget they are nervous and shy. I had one little girl … her mom contacted me and said, “My daughter was so shy she wouldn’t even look at anybody in class. She has just blossomed in this program.” She spoke to her class and told them about what they were doing. The teacher was so excited about seeing this shy little girl who was so excited she forgot she was shy. The teacher then asked Lily (the little girl) to speak to the whole first grade––she was around 6 years old.

CC: What advice do you have for parents on teaching the importance of community service to their kids? KM: Bring your child to go help an elderly neighbor who needs to have their lawn raked, or just different things that they can do [to help] people that are nearby. Even at the grocery store, taking the time with a child to teach them how to hold the door open for someone… Little things like that start opening up ways that kids can help. And they’ll start looking for ways on their own … without you even saying anything. They can also do their own collection drive with kids…. They can read things in the newspaper to their child, on a child-appropriate level, especially if it’s something where the parent can think of something they can do. If they run across a story they can share it at dinner and say, “What do you think we can do to help?” Those are the things that make an impact on kids.

CC: One last question, something personal. Now that your son is older, as you look back and reflect, how has his experience with MPK influenced the man he has become? KM: He still cares deeply about making a difference and always looks out for the underdog. He is starting his doctorate in psychology at Texas A&M this fall, with plans to be a therapist as well as contribute to research in the field, specializing in what gives people meaning.