The Many Ways Kids Benefit From Meditation - DFWChild 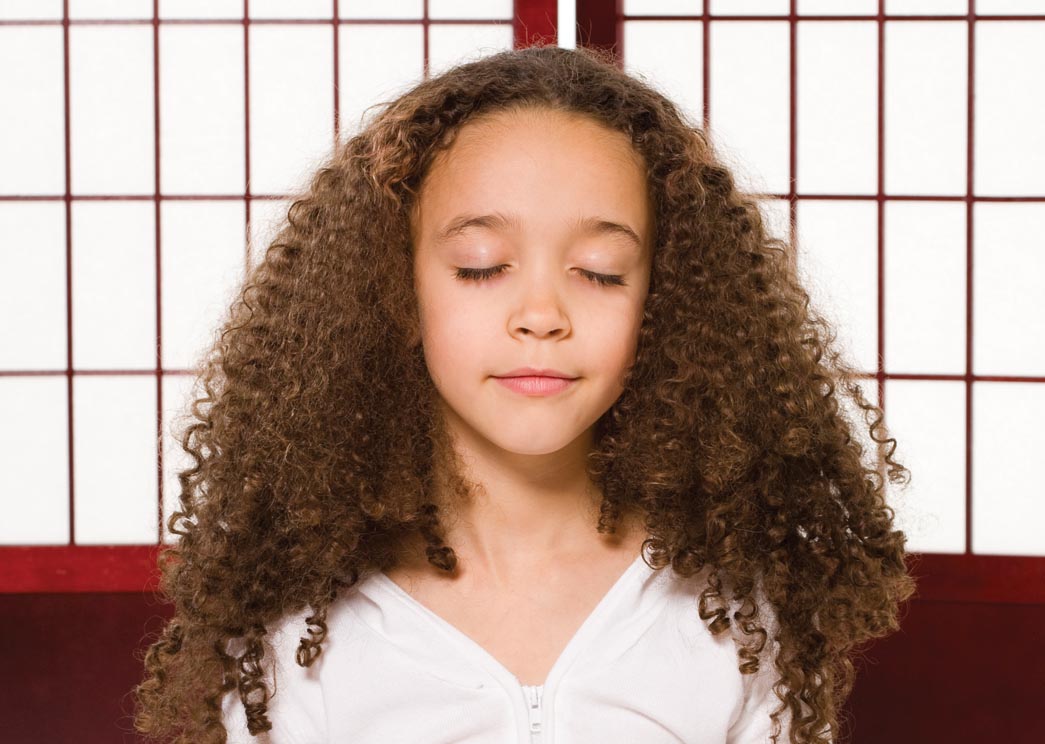 Kids get stressed too. Teaching them meditation might just help ease their anxiety.

When was the last time your family went one day—that’s 24 whole hours—without anyone looking at a screen? Between his email, your Instagram, their marathons of Paw Patrol and Doc McStuffins and all those endlessly satisfying slime videos, it’s a wonder we manage to get anything done that doesn’t involve a device. This new American life is full of distractions disguised as stimulation, not to mention everything else your family is up to, and kids are overstimulated, overscheduled and underprepared to deal with it. Instead of cutting back—because, let’s face it, that’s hard—some parents are teaching their kids new coping methods to handle the overload. Gail M. Gross, an educator with a doctorate in psychology, spent a year studying stress reduction in fifth-graders in the Houston Independent School District. Her solution to the melee? Meditation.

“What does meditation do? It distracts you from your distraction,” she says. Meditation and its bosom buddy mindfulness work by lowering blood pressure, increasing circulation and pumping blood to the prefrontal cortex, the part of your brain responsible for abstract thinking, choosing right from wrong and suppressing emotion, among other pretty important tasks.

Meditation also reduces cortisol, a stress hormone that can actually alter the architecture of the brain when overproduced (and not in an Extreme Makeover: Home Edition kind of way). But when the prefrontal cortex is at full capacity and cortisol levels are under control, kids can handle stress, Gross says. “A child whose anxiety is lower performs better in every possible way.”

Better performance means a prettier report card and success at all those extracurriculars. Sports psychologist and certified mental trainer Bob Neff, founder of the Dallas-based Mental Training, Inc., has clients ranging from world champion amateur, professional and Olympic athletes to nonsport performers like musicians, dancers and even business executives.

The Dallas dad of two believes “awareness is power” because being aware of your anxious thoughts and emotions allows you to dismiss them when the pressure’s on. But it’s more than that, he says—learning to be aware and be still is good for kids’ overall wellness. “Our society has taught all of us that if we have nothing on our mind, we are probably stupid or bored or wasting our time,” Neff says. “But it’s worthwhile to let the mind go quiet.”

Letting the mind go quiet can take a variety of forms: breathing exercises, in which you breathe from the stomach and pay attention to the air flowing through your nose; creative visualization, or imagining yourself in another place; mindfulness, a hyper-awareness during any activity (pay attention to those suds when you’re washing dishes); and techniques such as walking meditation, in which you’re playing flâneur but looking inward rather than outward.

All of these techniques serve to reduce stress, enhance creativity and foster empathy in children. Mindfulness also gives kids a sense of control over their minds and bodies, which, along with empathy, can help prevent bullying, Neff says. Gross agrees: “If you teach children to deal with their own feelings, then they won’t project them out.”

Corporate coach and meditation teacher Buddy Fichera believes that a good mindfulness regimen starts with parental involvement. The father of three once ran the Fort Worth Meditation Center but now uses his lifelong mindfulness practice in his role as CEO of the coaching company Radyx. His son Alex, also a dad of three, practices meditation with his own kids. Seven-year-old Xander has been meditating since he was 3. Early on, he was too young to grasp the concept fully, but Alex would let his son stay in the room while he meditated in the mornings to encourage him to pick up good habits.

Mindfulness looks a little different for 14-year-old Jackson, who was diagnosed with ADHD as a child. Instead of the traditional closed-eyes, crisscross-applesauce routine, Jackson opts toward calming activities such as reading, writing or creating comics. According to Alex, this kind of mindfulness supports the goal of getting Jackson to “inadvertently concentrate on one specific area of focus when things are getting pretty heavy in his head.”

Whether you and your kids decide on a calming activity, breathing exercises or hyper-aware dishwashing, the most important part of starting a meditation or mindfulness regimen is finding an approach that’s comfortable and natural. Here are six tips to consider:

Make it a routine. Commit to meditating around the same time every day, whether it’s in the morning before breakfast or in the car on the way home from school. “A minute a day is more important than 30 minutes once per week,” Fichera says, “because it’s more likely going to turn into a regular habit.”

Choose a special space. Alex recommends that you select a spot for meditation that’s free from distractions (ahem, devices). Gross and her grandchildren meditate in a closet that they’ve decorated.

Set a timer. Your kids’ minds may wander over the hills and far away, so Neff recommends setting a timer to “bring them back” midway through each exercise.

Play background music. Gross is a big believer in baroque music to accompany meditation because it naturally slows the heart rate. She suggests popular nuptial choice Pachelbel’s Canon in D.

Use props. Kids have busy little hands, and though the goal of meditation is to hone their focus, sometimes they just can’t sit still. Early on in the family’s meditation practice, Alex would encourage Xander to play with toys or other objects while his dad meditated, which enabled his son to concentrate on a single task.

Do it together. Set an example for your kids by practicing mindfulness yourself. Brushing up on your skills will also give you the confidence to guide your kids through meditative practices. If your kids see a change in you, they’ll be more open to the experience. Besides, practicing meditation and breathing exercises together is one more way to spend quality time and connect as a family.