Girls and STEM: How This Club Is Bringing On the Opportunities - DFWChild

Skip to content
DFWChild / Articles / Family Life / People Doing Good / Girls and STEM: How This Club Is Bringing On the Opportunities 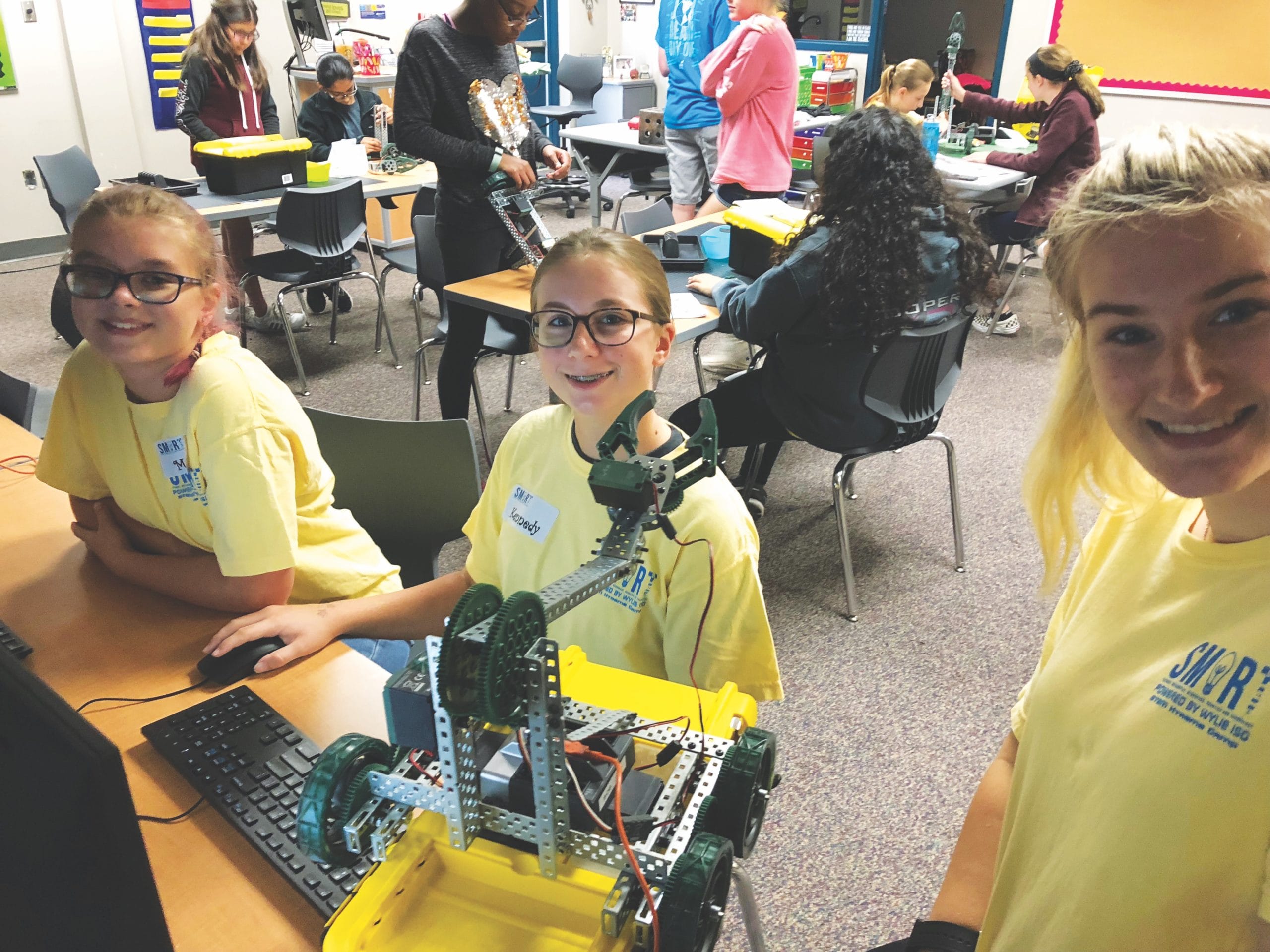 We’ve seen the stats: As girls get older and progress in school, many turn away from STEM courses and career paths. Quite a few initiatives have popped up over the years to keep girls engaged—and one local organization is having a unique impact. SMARTgirls was started by a smart girl herself. We chatted with 17-year-old Kate Vinson (who created the Wylie-based organization while she was in elementary school), her mom and club coordinator Cristy, and group director Ann Darby, about the difficulty in finding women in STEM, the changing dialogue and how kids outside Wylie can get involved.

What’s the goal of SMARTgirls? Cristy Vinson: The intent was to bring awareness and offer a solution to the fact that many times, girls lose interest in STEM. The group was designed to offer interesting and hands-on opportunities for girls in a local and low-cost environment. Our goal has always been primarily getting girls involved and inspired.

Why do you think girls tend to lose interest in STEM? CV: We attribute it to lack of confidence. The classes start getting harder; the math seems daunting. I think the classes are there—it’s just really tough to get girls to stick with it.

What made you decide to focus on STEM? Kate Vinson: When I was in fifth grade, I was really interested in becoming an engineer, but some of the boys said that girls couldn’t do that. My dad said I could! So I thought, What if girls didn’t have a dad like mine who told them they could do things if they worked hard and studied?

I had attended some summer camps, but they were in Addison and Dallas and cost a lot of money—it was hard for my mom to get me there, but she did. I was part of Texas Future Problem Solvers, and I talked to my sponsor, Ann Darby, about the idea of starting an engineering camp just for girls that was in Wylie and didn’t cost too much. She thought it was a great project and signed up to help me.

Was it challenging to get SMARTgirls started? KV: It was hard! We didn’t have any money to start with, so we had to charge enough for the girls to attend so that we could afford the supplies. We wanted to make it really fun and hands-on so they could learn about different kinds of engineering. That first year, 2014, our teachers were all volunteers. We talked about aerospace engineering, telecommunications, robotics, chemistry, electronics and lots of other things. It was a lot of fun and a lot of work to decide what kits and supplies to order and what to teach.

Ms. Darby and my mom helped me, and we worked all summer to put it on. We had to create a website, registration information, work with the school district to allow us to take payments and hold the camps on campus—lots of things we never thought of. We did lots of research on cost and invited a lot of professional engineering women to come speak. It was actually sometimes hard to find women, so we also had some men come speak.

Was that frustrating to have a hard time finding women in STEM careers? KV: When we first started, [that] kind of made me mad. But then I remembered that’s why we’re doing this. It’s become easier to find women in STEM since though.

Who are some of the engineers you were able to find to come speak? KV: We had a Ph.D. student from UT Arlington who had just received a National Science Federation grant for her airplane engine design. We had the CEO of a portable telecom company, who had created the business on her own. We had the dad of one of our girls who worked for SpaceX.

What does your programming look like now? CV: [In addition to serving Wylie students,] we welcome kids from neighboring districts and home school. In a normal summer, we hold a TechTitans SMARTgirls STEM Camp for beginners (fifth and sixth grade girls), STEM Xtreme (seventh through ninth grade girls), Pre-Biology (for ninth grade) at each of the high schools, and Robotics (for fifth through eighth grades). During the school year, we have SMARTgirls clubs at all our Wylie ISD intermediate and junior highs—six campuses.

One year, Texas A&M and Paragon Engineering in Richardson invited us to a week-long summer STEM camp for girls. So we took 20 girls down to College Station on a bus; it was so fun! My favorite camp is our Xtreme camp; we alternate activities each year so that girls can come two to three times, but we do welding, robotics, 3D printing, drones, cooking chemistry, forensics, pre-medicine and more. And we do sell some of our curriculum to other schools and groups.

How many girls are participating now? Ann Darby: [After that first year], 75 fifth and sixth grade girls attended after-school club meetings each month. We continued to dive into other types of engineering and medical careers too. Now we have after-school clubs at all three intermediate schools, 50–75 girls per school, and we also offer Saturday workshops each month for the seventh and eighth grade girls and have 50–75 participants.

Has COVID impacted the group? AD: We canceled club meetings in April and May, and had to cancel camps in June. In past summers, we have had four different camps with up to 200 campers. We were given permission by the district to hold two of our camps in July. We were able to have only 40 campers this summer, [and those slots] filled up quickly with a waitlist. Robotics Camp was held in July; campers built and programmed robots to complete multiple challenges. STEM Xtreme was also in July. Campers rotated through experiences [such as] welding, robotics, forensics, or computer-aided design and 3D printing. We also highlighted real-world connections and careers in each field.

Do you feel like the dialogue about girls in STEM has shifted so that more girls are encouraged to stay in or join STEM activities? CV: Yeah, we think the dialogue has changed a lot with girls. [They’re now] super interested and even proud to be in STEM—not embarrassed. When Kate was in fifth grade, it was embarrassing for her to say she wanted to be an engineer because of the reception she got. Now it’s a much more common thing. For instance, Kate was one of the first welders at her high school and now there are quite a few girls in welding—and most attended SMARTgirls or volunteered with SMARTgirls at some point.

Want to get involved? There are SMARTgirls representatives at Wylie ISD intermediate schools who can provide information about meetings and events. You can also visit the SMARTgirls website and Facebook page for more information.