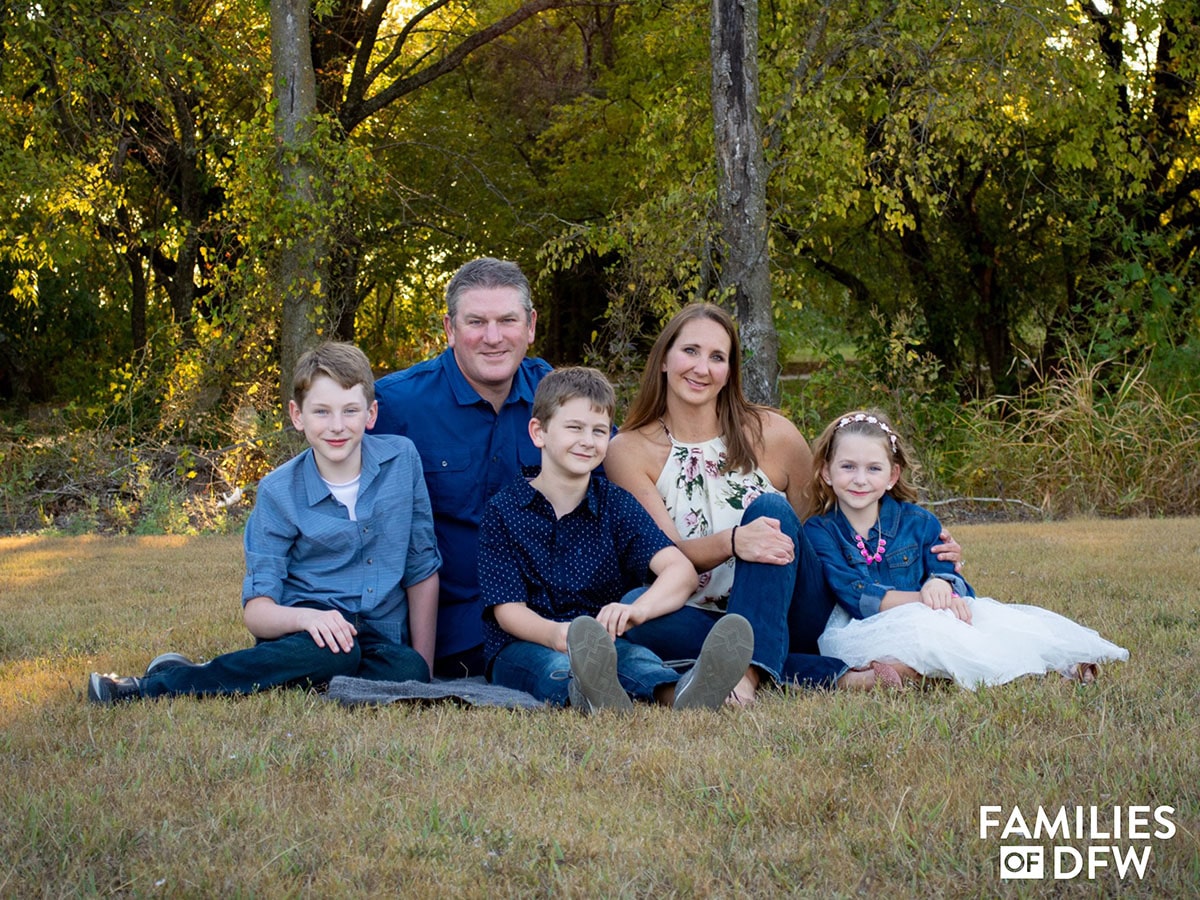 When Amie Carson Betz was 20 weeks pregnant, she traveled from Kansas to California for her grandmother’s funeral. The morning of the funeral, she was rushed to a hospital, where she spent the next seven weeks in preterm labor—1,000 miles from home. Betz lives in Wylie with her husband Dave and their three children: Carson, 10, Caden, 9, and Aliya, 7 and own Betz Heating & Air.

My pregnancy had been fairly rocky from the start. I had been told that I had a low-lying placenta but that it typically resolved itself before 24 weeks. The doctor wanted to keep an eye it, but didn’t seem too concerned. When I was 20 weeks pregnant, my grandmother passed away. Her funeral was going to be in California. I asked my doctor if it was safe for me to travel to California from Kansas, where we lived at the time, and she agreed.

The morning of the funeral, I had massive bleeding and was rushed to the nearest hospital. I was told that the baby is OK for now and that they needed to focus on me. They would not save my baby if it meant risking my life because the baby is not considered viable until 24 weeks. There is nothing more heart-wrenching than hearing that. Once I was stabilized and they were sure that I was not in danger of bleeding out, they transferred me to the antepartum wing. They told me that I would need to go 48 hours without bleeding to be released.

That never happened. I spent the next seven weeks in a hospital bed more than 1,000 miles from home. That low-lying placenta became a placenta previa and caused preterm labor. It was a viscous cycle of bleeding that led to contractions that led to more bleeding and so on. I have naturally low blood pressure, so the doctor struggled to find a medicine that would stop the contractions without lowering my blood pressure too much.

My husband, who is 6-foot-6-inches, slept on a cot next to my bed that entire seven weeks. Luckily, Dave had a consulting job at the time and was able to work from the hospital cafeteria. My mom stayed with my uncle nearby so that she could be there for me as well. As the days turned into weeks, we started to realize that we would not be going home until the baby was born.

As hard as it was, we knew we were in great hands. The nurses and doctors there were incredible! They are like family even to this day. The nurses even put a potluck Thanksgiving meal together for my family so that we didn’t have to eat hospital food.

Around week six of this ordeal, things started to get a little more out of hand. The contractions were so strong that I was not really sleeping. The doctors were struggling to control the labor at this point. They had told me that the last resort was magnesium. They explained that it would relax all of the muscles in my body and would slow the labor, but it would not be comfortable for me.

When the doctor entered the room that day, I knew something was different. I knew he was about to tell me that they were going to pull the “last resort” trigger. The emotions were overwhelming. I was barely over 26 weeks. It was the first time that I had to face the reality that I was not going to be able to just lay there until the baby was full term. This baby was going to be premature—it was just a matter of how premature.

The doctor explained that while it was not ideal to start the magnesium, it was our only hope. They started out slow, but it wasn’t helping enough, so they had to give me a pretty heavy dose.

I remember the feeling so clearly. It was hard to look at anything. The muscles in my eyes wouldn’t let me focus. It was miserable.

My in-laws came to visit for Christmas so that my parents could get a break and go on a trip they had booked to Jamaica. They brought stockings and gifts to open on Christmas Day, but I didn’t even want to open my eyes. My father-in-law flew back to Kansas that afternoon. My mother-in-law stayed but went back to her hotel so that I could rest.

That night, my water broke and they rushed me in for an emergency C-section. Carson was born at 27 weeks, on Christmas day, weighing just over 2 pounds. He let out a very weak cry before they whisked him away. I was sent to recovery while they got him stabilized in the NICU. He was intubated and set up with what seemed like a million wires. He looked so tiny and fragile. As we looked at our little Christmas baby, we realized we had just begun the fight. The last seven weeks were nothing compared to the battle ahead.

Carson spent the next 13 weeks in the NICU. It was the most traumatic roller coaster you could possibly imagine. I can’t even count how many times I watched my precious baby forget to breathe and turn completely blue before the doctors and nurses could get him back on track.

There were so many battles along the way—everything from his immature lungs and nervous system failing to a hole in his heart that wouldn’t close. Not to mention liver issues from the IV nutrition because his stomach was too underdeveloped to digest milk, and the damage to his eyes from being on oxygen for so long. It just seemed like we would take one step forward and three steps back.

But every time the doctor would tell us that they had scheduled a surgery to fix something, Carson was healed. He did not require any surgery while he was in the NICU. Dave was able to donate enough blood to sustain him for all of the blood transfusions he needed. We were so fortunate! He was our Christmas miracle.

One of the NICU nurses offered to let us take care of her brother’s apartment while he traveled for business. We only had to stay in an extended-stay hotel for a week. That was a huge blessing. Even though we spent very little time away from the hospital, we needed a place to sleep.

When Carson was ready to go home (pretty close to his due date), we had some tough decisions to make. Carson still required oxygen. This made travel very complicated. They worried about the elevation crossing some of the mountains and its impact on Carson’s oxygen usage. They just didn’t think it was safe.

They wouldn’t let us fly on a commercial plane, so they had to get our insurance to cover a medical jet to take us home. The only way our insurance would cover it was if he was being transferred to another NICU. We ended up spending another 10 days in a NICU in Kansas.

We got to bring him home on his due date without the oxygen tank. This little miracle defied all of the odds! We have had our share of medical battles since then, but for the most part he is a happy and healthy 10-year-old boy.