Dallas Children’s Theater is turning the big 3-0 and throwing a community birthday party to kick off the North Texas premiere of Dr. Seuss’s The Cat in the Hat. Here’s all you need to know about the party, the new season’s 11 productions and more about why the largest professional family theater in the Southwest is still the cat’s meow after three decades in show biz.

Excellent lineup of shows
The 2013–2014 season is filled with stories you know from children’s books and fairy tales as well as original plays, often by resident playwright Linda Daugherty.

Opening night parties
An hour before the stage curtain opens inside the 400-seat theater, the fun begins in the lobby. On the first Friday evening performance of each show, let the kids stage their own impromptu show at the All-Star Puppet Theater, enjoy special activities that vary by show and eat some treats from local stores, bakeries and sweets shops.

Happy birthday sing-alongs
During intermission, actors from the show reappear to invite all boys and girls with birthdays that month to join them at the front of the stage and the entire audience joins together for a “Happy Birthday To You” song for all.

Face time with the cast
After each show, head out into the lobby to meet the actors – still in costume, of course – for photos. If the play you’re seeing is based on a book, bring your copy from home for an autograph from the title character.

Kids’ design contests
After last year’s first costume contest for Pinkalicious, DCT hosted a hat design contest this year for local kids. Emmy-nominated costume designer Lyle Huchton worked with each of the 12 winners to transform their drawings into sparkling 3-D versions, which you’ll see on stage in each production. Take a look at the board in the lobby to see all of the entries, and stay tuned for another contest expected next year.

Original sets and puppets
Months before each production’s opening, the on-site workshops start buzzing with circular saws and paintbrushes. Craftsmen build sets from scratch for every show, and resident artist Kathy Burks creates the puppets in her workshop. Some of the staff’s favorites from over the years: the enormous pirate ship from How I Became a Pirate and the 10-foot rock eater – a puppet – from The Neverending Story.

Costume shop
Since executive artistic director Robyn Flatt founded the theater in 1984, DCT has boasted 69 world premiere plays, 10,596 performances and nearly 4 million audience members. Multiply the shows by the costumes and you get DCT’s mile-deep walk-in closet. Lucky for you, these costumes are available for rent and open to the public, which means that your Halloween shopping just got a lot easier. Most of the costumes are adult-sized, but some are available for kids.

Academy classes
Classes are available from September–July for young thespians, i.e. teens and kids as young as 3½. You may already recognize the some of the education faculty. That’s because many of professional theater artists – designers, actors, directors – are also cast in the shows.

ASL interpreted performances
If a child in your family is deaf or hard of hearing, Dallas Children’s Theater has you close at heart. Book your tickets for special performances with an American Sign Language interpreter. These showings are usually held on the second Sunday performance at 1:30pm or 4:30pm. Have a group? Special arrangements are available for other dates. 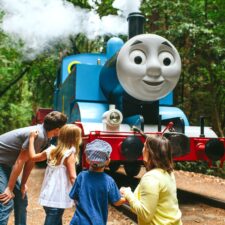