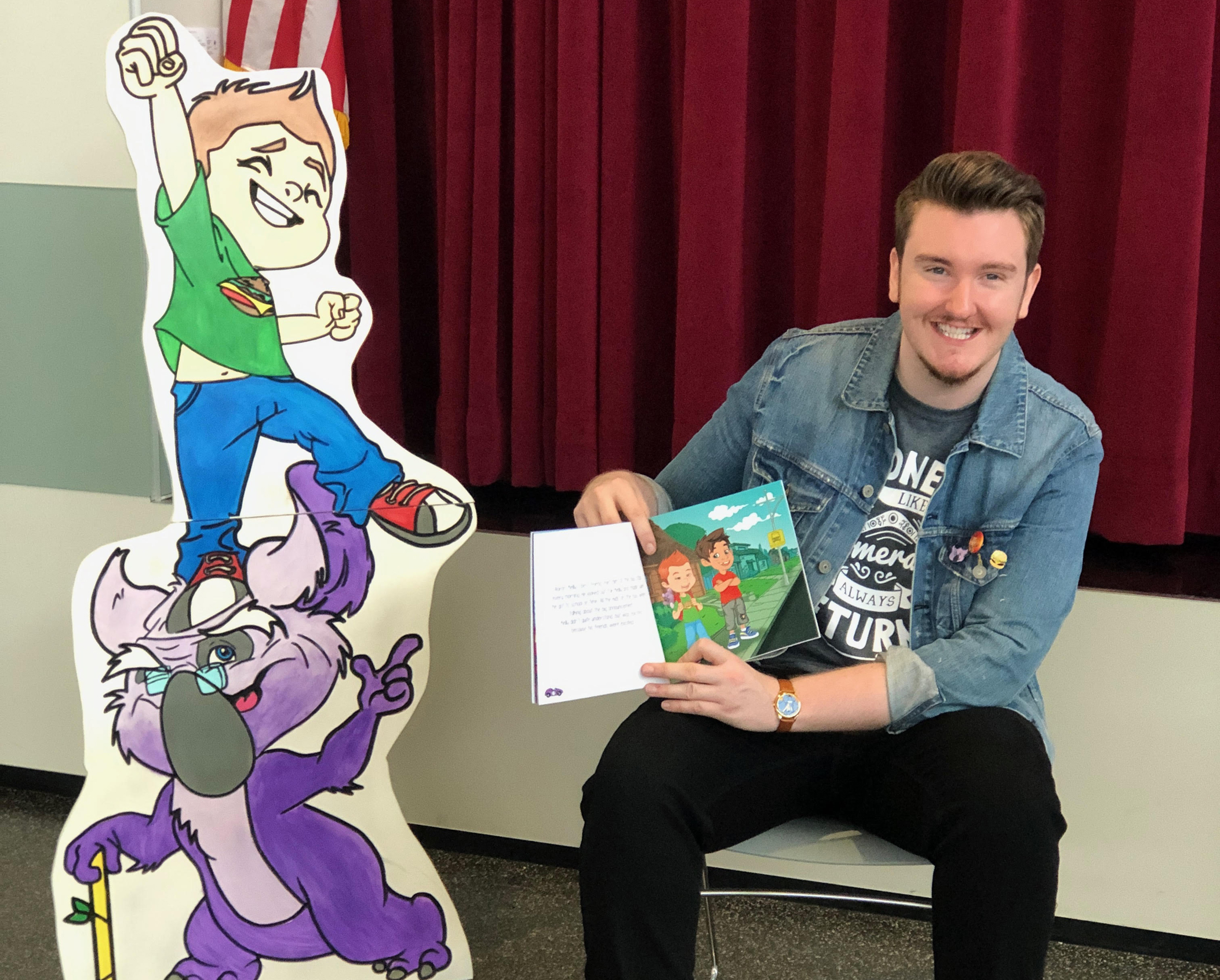 When it comes to learning about differences and inclusivity in public schools, one local man feels that kids aren’t taught enough about the needs of people with Down syndrome. As a caregiver for his uncle Kelly, who had Down syndrome, Jordan Burk fielded lots of questions from curious kiddos; though Kelly has now passed away, Burk wanted a creative way to introduce children to the genetic disorder. So the 30-year-old author, illustrator and Down syndrome advocate from Dallas recently published his first children’s book, Kelly and The Great Pinewood Derby, and toured schools across Texas for book readings and signings. Now he’s beginning the process all over again with the second installment in the series. We sat down with Burk to talk about how the book has helped teach kids about kindness and inclusivity.

To snag the book, order it from kellyandkelso.com for $12 or Amazon for $15. For swag, visit the Kelly & Kelso website to purchase shirts, pins and more, or print off one of the worksheets under the activities tab. As more book readings are scheduled, check the itinerary tab to see if there is one near you—and your child’s school can always reach out to Burk to book a reading.

What made you want to be an author and illustrator? Tell me about that journey.
In about third grade, I had [a program called] Young Authors in school, so I would write stories, and I’d illustrate them. There were competitions, and my teacher would submit my books. Third grade, I kind of dabbled in it, but fourth grade is when I really enjoyed writing, drawing. My fourth-grade teacher actually came to my book signing yesterday, so that was really cool. She’s one of the reasons I really enjoy what I do now. She gave us so much room to be creative and didn’t really limit what we did as far as writing, and that gave me room to explore my creativity.

Was Kelly and The Great Pinewood Derby your first project?
I’ve illustrated for other authors, but this was my first solo project being the author and illustrator. It’s my baby.

What was the inspiration behind that book?
The inspiration for the Kelly book started with my uncle, who had Down syndrome. I took care of him for 14 years, and during that time, we would have little kids—whether we were at the park, Target, wherever—come up and ask questions. Usually they were just innocent questions. They would say, “What’s wrong with him?” and I would explain he has Down syndrome and go through the whole scenario. Or they would ask, “Why does he have a stuffed animal?” That kind of stuff. With the curious questions we received from the kids, I thought [the book] would be a great way of informing them and also teaching them about Down syndrome—a disability that we don’t really teach too much on or talk too much on in public schools.

What is it that we should know about the needs of people with Down syndrome?
For the most part, everyone that has crossed my path that has had Down syndrome has been super happy, and they are not in pain. They’re really not that different, and they are seriously some of the most happy people. I know kids just from the outer appearance don’t always feel the opportunity to reach out to someone like that, and so if they can learn through my book that they have stuff in common—that’s what we talk about in the Great Pinewood Derby. We talk about hamburger days—most little kids like hamburgers—and recess because little kids like recess and so does Kelly. So there’s so many things that little kids can relate to the Kelly character on. That was my hope and goal is that they can look at him and [think], OK, he’s not that different from me. He might have an extra chromosome, he might have Down syndrome, but in the end, we are all the same. We all just want a good cheeseburger and to go play.

Is the book a great way to introduce kids to Down syndrome? What can help expand the kids’ horizons?
The book is to break down the walls and the barriers that kids and parents might have, or stigmas they might have, for someone with Down syndrome, so hopefully, through the book, it will give them an opportunity to reach out to someone with Down syndrome. In the back is a Q&A that parents can go over with the child, or a teacher can go over with the child. It goes a little bit more in depth. I’m hoping that the Q&A helps answer some of those questions.

What’s your goal with the Kelly & Kelso series?
With the Kelly & Kelso series, I would love to have several books. Basically with the Kelly one, we were introducing the Kelly character and Down syndrome—what that means, what that looks like—but our overall goal is to spread kindness and to show kids it never hurts to be a friend, to reach out to those who may not always be included. So basically spreading kindness is our theme. It’s one of our T-shirts. “Kindness like a boomerang always returns.” The cool thing about our T-shirts is that we work with a company in Ohio—Reeve’s Tees—and they actually hire adults with Down syndrome, and they do vocational training, so they are the ones that package all of our shirts. And with every shirt, you get a little cue card, and it has photos of their employees, and on the back, the employee that worked on your shirt will sign it.

Any future plans?
I’m in the process of working on the second book at this moment. It’s already been written. I’m in the process of illustrating it. In this particular book, Kelly gets to meet an adult with Down syndrome, and it gives him somebody to look up to and admire—somebody that has a stable job, somebody that is successful—and gives Kelly an idea of, “Oh, that’s somebody I could be one day.” Kind of taking off any limits Kelly might have had on himself, or others might have put on Kelly.

Is there a specific moment where someone has told you the difference the book has made?
I did a book reading; a month later, I received a painting—one of the kids had painted Kelso. I believe the kid had autism. That was really cool that it impacted the kids so much.