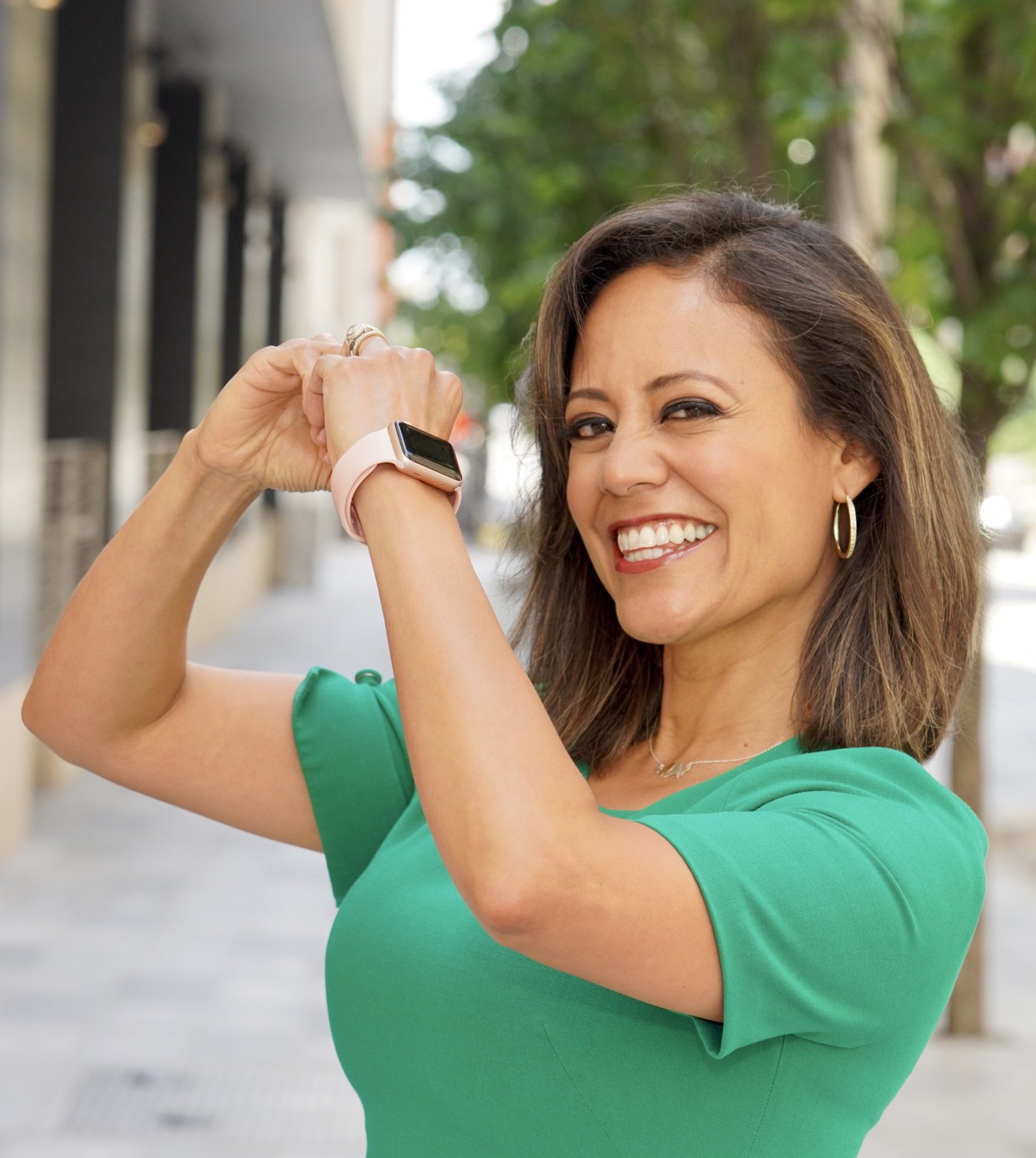 Cynthia Izaguirre ought to be one of those women we love to hate. She’s lost all her baby weight after giving birth to twins just over six months ago. She’s got gorgeous eyes and a winsome smile. When she delivers the news as co-anchor of WFAA-Channel 8’s Daybreak, she’s poised, alert and engaging. And she’s bubbly at 7am after already being awake for five hours – without the aid of caffeine.

But as she settles in for an interview, kicking up her (fabulously high) heels, she feels more like a girlfriend than a frenemy. There’s a reason why we invite her into our homes, why we watch Daybreak as we groggily pad through our morning rituals; she’s got a trustworthy, strong yet friendly way about her. She’s real – on or off camera.

So I’m not surprised when she quickly starts trading stories about marriage, babies, nursing, labor and delivery. Cynthia married her husband, residential architect Jeremy, whom she affectionately and protectively calls “Captain Awesome,” in October 2010. A year later, they happily discovered they were expecting. “We didn’t waste any time,” she says.

Cynthia recounts the doctor’s visit where she and her husband discovered they were having twins. “It was indescribable joy,” she says. “To hear those heartbeats … that’ll choke you up. All I wanted to do was take as good care of them as I possibly could. And I knew that meant taking good care of myself.” She and her husband decided not to find out the genders of the babies so they’d be surprised.

She opted for drug-free, natural childbirth – such a rare choice for a mother of multiples that it was the first time her OB-GYN had delivered twins that way. “Captain Awesome was my rock during delivery,” she says. “Couldn’t have done it without him.” After just a short time of labor, her little girl, Karina, came into the world. Finally meeting her was “the most euphoric, beautiful feeling.” Lest you think Cynthia’s birth experience was perfect, the delivery of her second baby, Simon, involved the vigorous intervention of two doctors over 48 minutes. Still drug-free.

Cynthia carried her twins for an unusual 35 weeks (moms of multiples carry their babies from 27–35 weeks on average). She attributes her ability to go nearly full term to her dedication to drinking 80 ounces of water a day. She also credits generous hydration – somewhat impishly, as she mock-grins and poses with her huge cup – for keeping her bright-eyed in the wee hours of each day. What happened when Cynthia took her twins home? What of the round-the-clock feedings, sleep deprivation, shock? Was she perky even then?

“This shift [3:30am–7am] at Daybreak prepared me for that. Bring it! Thank you, Daybreak!” she says with a laugh. “I’m used to waking up in the middle of the night. It sucks, but I’m used to it.” She credits having an incredibly supportive husband – “He put on his cape and helped me with overnight feeds” – and her mother, who was a constant presence for the first several months of the twins’ lives. Cynthia nursed her twins for three months and admits it was difficult to maintain her feeding/pumping schedule with the unpredictability of work as a journalist. Breastfeeding is hard, she says, “especially for working moms. The ones who make it work are my heroes.”

Encouragement From an Early Age

Another hero of Cynthia’s is her mom, who raised Cynthia and her two sisters as a single parent. “She instilled in me a great sense of drive, pushing me to reach for the very top despite our low economic situation,” she says. Cynthia’s journalistic aspirations were also boosted by a weather-watching obsession in middle school. She remembers sitting in front of the TV, constantly checking for tornado warnings on Channel 8 and worrying about whether a twister would take out the Dallas apartment complex where her family lived.

“I grew up watching Channel 8: Troy Dungan, Gloria Campos, John McCaa,” she says. “One day I thought to myself, ‘This is what I want to do.’ My mom said, ‘Gloria [Campos] does it; you can do it, too!’” From that moment, Cynthia resolved to be a journalist. “Lucky me; when I went to college, I already knew what classes I was going to take.” After graduating from the University of North Texas with a major in broadcast journalism, Cynthia gained experience working in Abilene (“The Spirit of the Big Country!”), Tyler and Albuquerque, New Mexico. But she always had her sights on Dallas’ Channel 8, which she joined in 2008.

Giving voice to the voiceless fuels Cynthia’s motivation as a journalist. She’s effusive about her “Our Neighbor” pieces, where she reports on achievements of North Texans and their impact in local communities. But Cynthia’s most cherished assignment is her “Wednesday’s Child” feature, where, in cooperation with Child Protective Services, she interviews older foster children in the hope of helping them find forever homes.

She tells the story of Ray, an ebullient 5-year-old who was abandoned at birth when his mother found out he had Down syndrome. Ray accompanied Cynthia to the Dallas World Aquarium for fun and an interview that later aired on TV. A family that watched the piece saw Ray, immediately knew he belonged with them and began the adoption process. “He’s now living happily in El Paso,” Cynthia says. “When the families remember and they call you and let you know what’s happened, it’s the best feeling.”

Cynthia is all about finding the balance of work and home – and she’s open to suggestions for improvement. Before the babies, Cynthia’s typical work schedule was to wake up at 2:30am, arrive at the studio by 3:30am, report the news for Daybreak and Midday, record additional spots and cut-ins and clock out by 12:58pm. She would then go home and work out – and constantly monitor the news for breaking stories.

“Now, I come home and my husband needs my help the minute I walk through the door,” she says. “It’s all twins all the time. I wouldn’t have it any other way.” Jeremy is the primary caretaker for the twins, opting to stay at home after she returned to work. “I can’t praise him enough for the great work he’s doing at home,” she says. “It’s noble. His job is so much harder than mine.”

Her only frustration right now is finding the time to work out. “If anyone has recommendations on how to fit in working out, please let me know. I still haven’t figured it out.” See? She keeps it real.