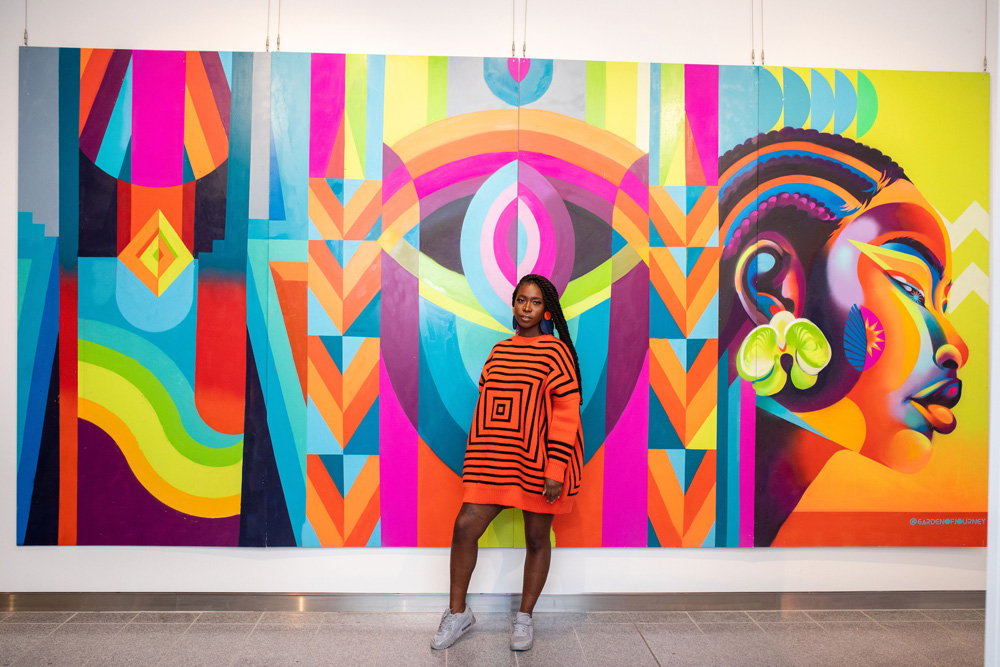 Black History Month each February offers an abundance of opportunities to celebrate Black history and culture and continue an ongoing conversation with your kids about the African-American experience. Here we’ve assembled some of the top local kid-friendly exhibits and events—ranging from dance and opera performances to rodeos, library read-ins, and art contests.

But we at DFWChild believe in honoring the Black experience not only during the month of February but throughout the year. (Mom blogger Jenay Sherman shares her thoughts on the topic here.) So we’ve shared a few ways below where you can keep the learning going well beyond February, and we’ll continue to add to this throughout the year. Did we leave out a great local event or exhibit? Let us know at editorial@dfwchild.com.

Bill Pickett Invitation Rodeo
This rodeo series honoring Black cowboys and cowgirls is named for Bill Pickett (1870–1932) who gained notoriety as the inventor of rodeo steer wrestling, or bulldogging, in Wild West shows. Read more about him here. Get your tickets to see this Western adventure rodeo with historical re-enactments.

Dallas Black Dance Theatre’s Cultural Awareness
As part of its 45th anniversary season, DBDT presents its annual performance series on stage at Wyly Theatre and broadcast virtually. The dances this year include not only the African rhythms of Awassa Astrige/Ostrich by Sierra Leone native Asadata Dafora, but also The Way of the Clave with music by North Macedonian jazz guitarist Toni Kitanovski; and Night Run, which combines modern dance and classical ballet with Flamenco-influenced guitar and a slow waltz. Read more about the history of each dance and grab your tickets to watch either in-person or from home.

Where: Wyly Theatre, 2400 Flora St., Dallas
When: In-person Friday–Saturday, Feb. 18–19 at 7:30pm; stream or watch on demand Feb. 19–21
Cost: Tickets for in-person performance from $45; to watch from home, $25 for virtual link per household.
Plan ahead: Tickets are available for more of its 45th season performances including Dancing Beyond Borders March 26 in Richardson, Encore! April 22–23 in Dallas, Spring Celebration May 20–21 in Dallas, and DBDT Academy’s The Big Dance June 4 in Dallas.

Buffalo Soldier William Cathey
The Fort Worth Central Library hosts a in-person lecture and historical re-enactment that tells the story of William Cathey (AKA Cathey Williams), the only documented female Buffalo Soldier. Seating is limited to the first 100 people, so come early to grab a seat. The event is presented by RosieLeetta “Lee” Reed, the past president of the Texas Buffalo Soldier Association and inductee into the National Cowboys of Color Museum and Hall of Fame.

Where: Fort Worth Central Library, 500 W. Third Street
When: Saturday, February 19 at 3pm
Cost: Free
Keep it going: Learn more about the history of Buffalo Soldiers at the National Multicultural Western Heritage Museum and Hall of Fame, originally named the National Cowboys of Color Museum. It’s located near the Fort Worth Stockyards and currently open by appointment, so call 817/922-9999 to bring your family for a visit Wednesday–Saturday for a tour of the exhibits about not only Buffalo Soldiers but also the Tuskegee Airmen, Native American Indian chiefs and the Vaqueros.

African American Read-In
This worldwide annual event, established by the Black Caucus of the National Council of Teachers of English in 1990, showcases children’s literature created by African American books and authors. Check with your local library for upcoming programs, such as Irving Public Library’s event, on Feb. 20 from 2–3pm. Storyteller Toni Simmons shares folktales in a program of songs, rhythms, chants, and diverse group of additional readers will share literature reflecting on life’s experiences and a love of reading.

Dallas ISD hosts a virtual African American Read-In. It’s open to the community and held via Zoom on Friday, February 25, from 8:30am–6pm. See the full schedule online and register at dallasisd.org/ReadinDay.

The Dallas Public Library hosts a full schedule of Black History Month programming at its branches, including dance performances, craft kits and more programs for teens and adults.

Dallas Mavs Black History Month Art Contest
As of part the Dallas Mavericks’ full series of events and programs, our local NBA team encouraging local students to create and submit a visual art piece for a chance to win a slew of prizes for the top five winners, and for the grand prize winner, two roundtrip airfares from American Airlines to visit a city that is rich in Black history, such as New Orleans, Memphis, or Atlanta. The contest is open to students in eighth through 12th grades and who attend school within 75 miles of American Airlines Center.

A Night of Black Excellence—Say It Loud: Songs of a Revolution
The Fort Worth Opera presents a line-up of internationally renowned opera singers, a flutist, a spoken word poet and pianists and the Bandan Koro African Drum & Dance Ensemble. There will also be a special tribute during the concert to Ms. Opal Lee, 95-year-old “Grandmother of Juneteenth” who was just nominated for the Nobel Peace Prize.

Dream in Black
AT&T’s fourth annual Black Future Makers campaign unveils its 2022 inductees, highlighting the people who continue to shape culture, advocate for equity and create pathways for the next generation of Black achievers. These makers, who will continued to be revealed throughout the month, include singer John Legend, gospel music superstar Kirk Franklin, and multidisciplinary artist Georgie Nakima, whose artwork is on display in a solo art exhibition in downtown Dallas. Come see her original portraits capturing all 28 Black Future Makers in her organic, afro-futuristic style. 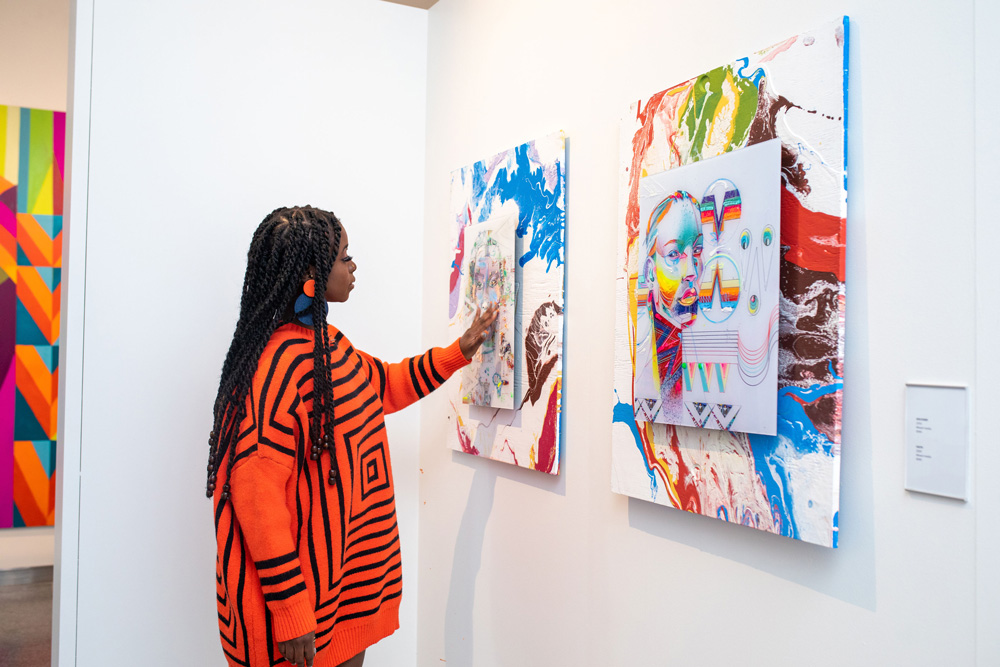 Where: AT&T Showcase, 208 S. Akard St., Dallas
When: February 1–March 31; open Monday–Friday 8am–8pm, Saturday 10am–8pm and Sunday noon–6pm
Cost: Free
Keep it going: For a custom portrait from the artist’s work from home by using the online portrait generator to build a custom image using the same artistic elements found in Nakima’s paintings. Plus, you can share your own story as an AT&T Black Future Maker? Submit a short video to apply for your chance to win $10,000 and an AT&T 5G enabled device.

Fort Worth and the Green Book
As car ownership increased in the first half of the 20th century, motorists of all backgrounds felt the call of the road, but Black Americans faced a unique set of challenges due to racial segregation. Experience a new, family-friendly exhibition that explores what it was like to travel in the 1930s, ‘40s, and ’50s, the challenges faced by Black citizens on the road, and the remarkable book called the Green Book that helped keep them safe. To learn more, listen to TCU professor Dr. Frederick Gooding, who curated the exhibit, give a lecture on February 21.

Exhibits at African American Museum of Dallas
This museum at Fair Park houses one of the largest collection of African American folk art collections in the U.S. Be sure to visit this month when to see the three special exhibits, each now extended through February 26: Sepia: Past. Pride. Power., about the photojournalistic magazine founded in 1946; The History of the Prairie View Interscholastic League: Black High School Sports in Texas in the Era of Segregation; and Politics, Protest and Black Progress in Dallas in the 1980s: The Photographs of George Fuller.

The Continual Struggle: The American Freedom Movement and the Seeds of Social Change
Self-taught artist Brian Washington—who’s also an attorney, arts advocate and intellectual—created this 25-piece collection that documents the phases of the civil rights movement, a pivotal time in America’s ongoing fight to eliminate segregation and other forms of race-based disenfranchisement. It debuted recently on MLK Day and will remain on view through March 27.

Where: George W. Bush Presidential Center, 2943 SMU Boulevard, Dallas
When: On view through March 27. Open daily; Mondays–Saturdays 9am–5pm and Sundays noon–5pm. Timed tickets purchased online are required.
Cost: Included with the purchase of a ticket to visit the permanent exhibit: $16 adults; $10 children; free for 4 and younger.

I AM A MAN: Photographs of the Civil Rights Movement, 1960–1970
The Irving Archives and Museum remembers the pivotal decade in the evolution of the civil rights movement in the American South, as public spaces were desegregated and as African Americans secured their right to vote. This exhibit of historical photographs is named for the message “I Am A Man” carried on protest signs during the sanitation workers’ strike in Memphis and features key events include James Meredith’s admission to the University of Mississippi, Ku Klux Klan gatherings, the Selma Montgomery March in Alabama, Martin Luther King’s funeral, the Poor People’s Campaign and the Mule Train.

Keep it going: Visit the Jackie Townsell Bear Creek Heritage Center in Irving for a picture of the local African-American experience from emancipation to the civil rights movement. Walk through the Masonic Lodge and the J.O. Davis House to learn about the Bear Creek neighborhood, considered the oldest African-American community in North Texas, through animatronic figures and everyday artifacts such as kitchen items, lamps and laundry boards. Then tour the restored Green House, once home to community leader Sam Green, to let the kids get a taste of life in the 1920s.
Where: 3925 Jackson St., Irving
When: Open by appointment only. Call 972/721-4754 to schedule a tour.
Cost: Call to inquire

Did we leave out a great event or exhibit? Let us know at editorial@dfwchild.com.