4 Castles to Tour in Texas - DFWChild 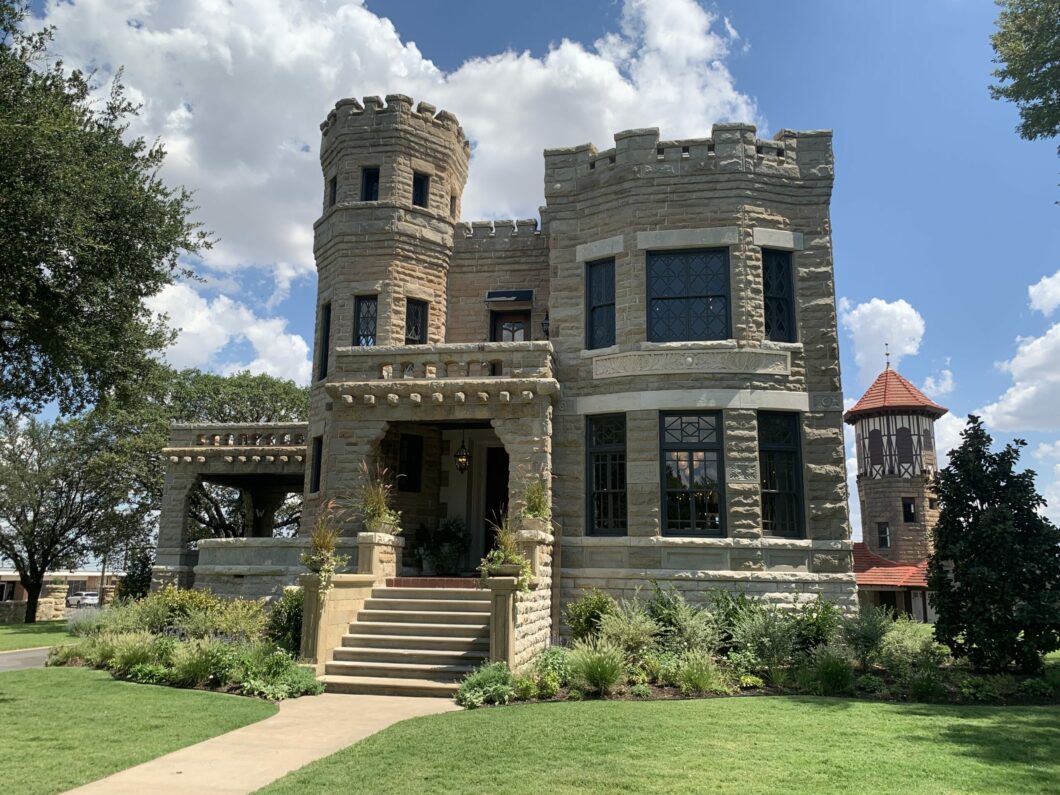 If you’ve caught yourself wistfully scrolling the new castles category on Airbnb, or your child is dead set on a princess costume for Halloween, it might be time for you both to indulge in your fairy tale fantasies by venturing out to these real(ish) castles in Texas.

And we’re using the term “castle” loosely here, as our Texas historic homes arguably cannot compare to the centuries-old palaces of Europe, but we generally define them as having a) at least three stories, b) towers or turrets (those notches as part of its defensive architecture), c) regular tours open to the public and d) that wow factor. Here’s what you’ll need to know about planning a fall family road trip to these not-to-humble abodes.

Where: Private address in Bellville, Texas
When: Tours available Monday through Saturday year-round with reservations
Cost: Tickets are $20 per person and $10 for kids 6 and younger.
How to visit: Call the bakery at 979/865-9804 to reserve a tour in advance. Learn more at newmanscastle.com. 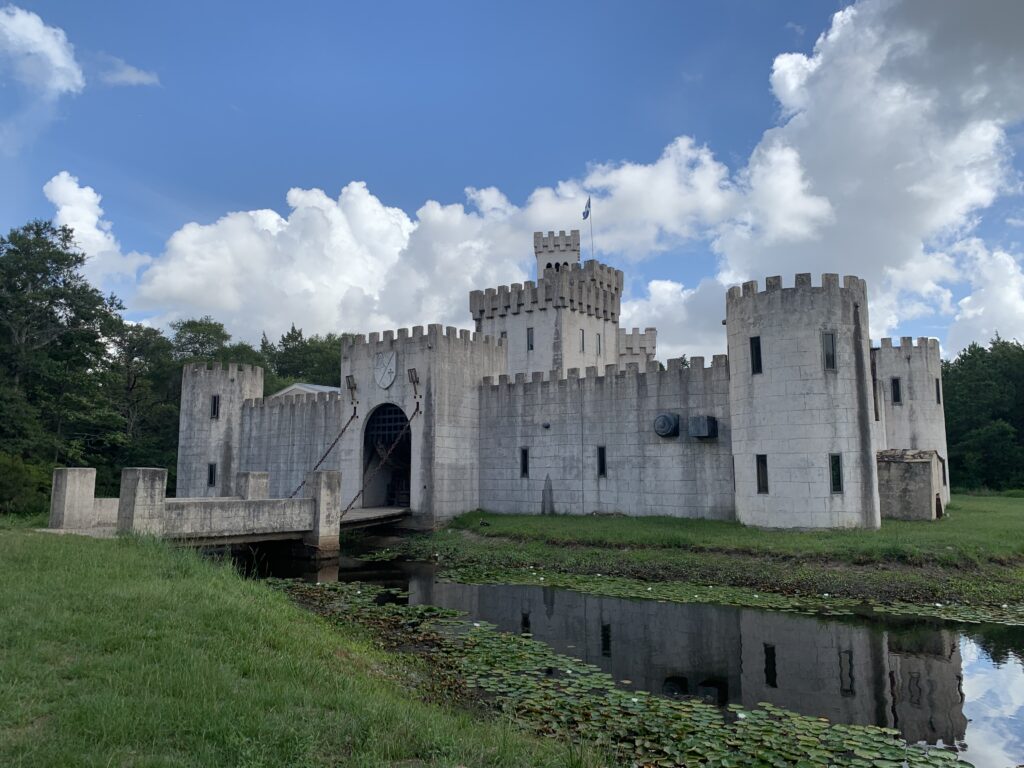 The 3.5-hour trip south from DFW to Newman’s Castle is well worth it to tour this impressive replica of a Scottish castle—scratch that, fortress—with a moat, a working drawbridge, and five corner turrets that overlook the sprawling wooded estate and are accessible via winding staircases.

Its resident royal is local bakery owner Mike Newman, who in 1998 designed and began building the castle himself, with the help of only one other assistant, as his private residence. Newman continues to live there full-time, offering tours Mondays through Saturdays and special events year-round.

Here’s how to visit: Call the bakery in advance to register for a tour. Saturdays tend to sell out in advance. Check in by 10:30am at the bakery on Bellville’s Main Street (this is a great opportunity to snag a castle-shaped sugar cookie) to pay for the tour. They’ll provide you with a wristband and a slip of paper with the castle’s private address about 5 miles away.

Upon your arrival, you’ll take in the panoramic view of the pond and moat full of glistening lily pads, a wooden trebuchet, and a nature trail that encircles the property. Finn, a spry Irish wolfhound puppy who likes belly scratches, pesters the ducks. On the Saturday I visited, the crowd included a friendly horde of children wearing their own tiaras and crowns. Kids are welcome to grab a wooden stick for play sword fighting and to carry with them during the tour.

The king eventually emerges from the castle donning his own crown and tunic, and addresses the tour group under a shaded pavilion. He gives an introduction of the castle’s history, leads the kids in imagining when knights and kings defended their homes from invaders, and empowers them to throw misbehaving guests in the dungeon. (He’s only half kidding. There really is a dungeon here.) Then he knights the boys and girls one by one with a tap of his sword. It’s very sweet.

To usher the crowd into the fortress, a staffer or two climbs opens the drawbridge by climbing inside a giant hamster wheel of sorts that manually raises the portcullis. Once inside, you’re free to explore every corner of the castle at your leisure. Kids will love to ring the bell by climbing the bell tower and pulling on the heavy chains.

The walls of the tower rooftops are quite high, but you’ll of course need to keep a close eye on your child just in case they decide to scale a wall. The open courtyard has plenty of space to chase imaginary dragons. In fact, you’ll find the 13 dragons depicted on-site. Ask for a dragon stamp on the hand when you find them all, or if you want one just because.

When you’re feeling hungry, head into the air-conditioned dining hall for a lunch of sandwiches and donuts provided by staff and this most hospitable king.

Where: 3300 Austin Avenue, Waco
When: Tours available through October 26, 2022 with reservations available between 9am–5pm Monday–Saturday
Cost: Tickets are $50 per person and $10 for kids 6 and younger.
How to visit: Reserve a tour dates and time online at magnolia.com. Call 254/235-0603 for any questions.

This one’s for the moms who love everything Chip and Joanna Gaines touch, but you’ll need to act quickly before it’s put on the market. Here’s the back story on Magnolia Castle: Originally named the Cottonland Castle, this Gothic sandstone and limestone structure was first built in 1890 by stone contractor John Tennant, with additions that continued through 1913. The historic home became the focal point of Waco’s Castle Heights neighborhood but sat vacant for nearly 20 years until the Gaines purchased it in 2019.

They chronicle the entire renovation in the new season of “Fixer Upper: Welcome Home,” airing on Magnolia Network starting October 14. Watch its transformation on TV, or see it for yourself in-person by registering for a one-hour guided tour through the fully-staged home, open now through October 26.

The Gaines plan to sell Magnolia Castle as a home—and we’re already jealous of the new owners. Lovers of Fixer Upper will agree that the renovations are achingly beautiful, and as the tour guides (mine was a Baylor student) explain, the Gaines kept as many of the original materials and touches as possible, down to the height notches of former resident children carved into the stone hearth in what’s now the dining room. The third floor is not part of the tour, but the basement is, which has been renovated into an expansive family room (with the only TV in the house) and a moody card room.

Guests are welcome to open cabinets and doors, they just ask that you don’t touch the smaller objects on display or sit on the beds. The tours cost $50 per person; children 7 and younger are free and are especially welcome to join the tours. If $50 sounds steep, keep in mind they’re donating 20% percent of net profits to The Cove, a local nonprofit benefiting homeless youth.

Go online to book your tour, offered between 9am and 5pm Monday–Saturday. If you’re visiting during that last week, make a weekend of it and stay for the annual Silobration at Magnolia’s ever-expanding grounds near downtown Waco. The event October 27–29 features concerts and a temporary roller skating rink at the wiffle ball park.

Where: 2618 Broadway, Galveston, Texas
When: Mansion tours available daily from 10am–5pm; last ticket sold at 4pm. All-access tours on Fridays and Saturdays.
Cost: Self-guided tour of Moody Mansion is $15 adults; $7 children; under 6 free. $34 family package for up to two adults and two children. All-access guided tours are $35 per person.
How to visit: Go to moodymansion.org; call 409/762-7668 for group tours. 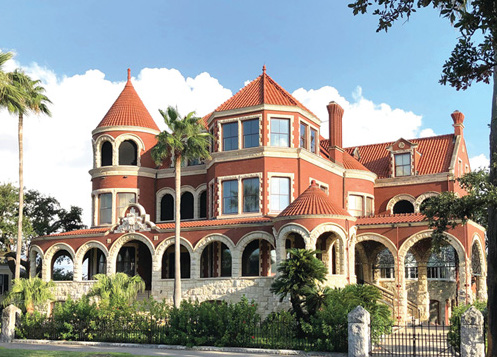 Your family itching for a beach vacation? Add this Galveston “castle” with its own children’s museum to your must-visit list. Completed in 1895, the four-story Moody Mansion was built with limestone and brick as an example of Richardsonian Romanesque architecture, a style inspired by medieval Europe.

The self-guided daily tours with audio devices for narration cover 20 rooms, including the ballroom where the Moody children and grandchildren were known to play. A brand new exhibition inside the mansion called Growing Up Moody explores the personal histories of the four children who grew up in the mansion: Mary, William III, Shearn and Libbie. It was their parents who purchased the mansion shortly after it survived the 1900 hurricane that devastated the island.

To see areas not normally open to the public, like the top floor where the highest turret looks out over the gulf, book a guided all-access tour on Fridays and Saturdays.

But the real draw for families with young children is on the ground floor. Since 2014, the Galveston Children’s Museum has offered a wealth of activities for kids ages 2–10. Nine permanent play areas to choose from means your kids’ interests will lead them from catching blue crabs from a mini fishing boat or jumping on a light-up dance floor to putting on their own production in the puppet theater. The UTMB Kids Clinic, with stuffed animal patients and a digital skeleton that mimics your body movements, is designed to encourage littles to associate positive feelings toward doctors.

For extra fun, look ahead on their calendar for upcoming special events, such as Da Vinci Day on Saturday, October 8.

Where: 2021 North Stemmons Freeway, Dallas
When: Thursdays through Sundays, with 1–3 shows depending on the day; also on occasional weekdays depending on holidays
Cost: $65.95 adults; $38.95 children, or less with available promo codes. (Get 20% off with their coupon code 20MT through Dec. 31, 2022.) Kids under 3 are free as long as they sit on adults’ laps and eat from their plate.
How to visit: Reserve your tickets online at medievaltimes.com/dallas. Call 469/342-5555 for any questions.

Last but not least, this castle right in Dallas’ front yard, near downtown, and here and Spanish queen sits on the throne. Inside, you’ll experience a two-hour grand production with highly trained knights in the ceremonial arena while you eat a four-course feast from your seats.

It’s also the only Medieval Times castle in the state, and if you’ve only ever heard about it and never before attended personally, it’s quite a treat—and there’s lots to do before the tournament even begins. The castle opens one hour before showtime, and you’ll want to use that time to make the most of your visit. Plus, it’s indoors and climate controlled, so you can visit any time of year.

To check in, enter across the drawbridge between the two massive towers and over the narrow moat filled with koi fish. Everyone receives a paper crown in a color matching that of the knight representing your seating section: blue, green, red, yellow, red and yellow, and black and white.

You’ll soon be waving a flag and cheering for your knight as they joust with real wooden lances and compete in hand-to-hand combat with swords, all vying to be named champion by Queen Isabella, the monarch of this imaginary 11th-century Spanish kingdom.

The show’s live animals—highly-trained horses and a falcon—are part of what makes this production so spectacular. Before the show, some of the horses are visible in their stalls, on the far side of the Hall of Arms, which showcases medieval artifacts—as does the Museum of Torture. That’s somewhat spooky for adults but may be too spooky for the smallest kids.

They may be more interested in the gift shop for costumes and toy weapons and in the knighting ceremony. To meet the knights in-person, meet back in the Hall of Arms after the show. Huzzah!

RELATED: How to Experience Scarborough Ren Fest as a First-Timer