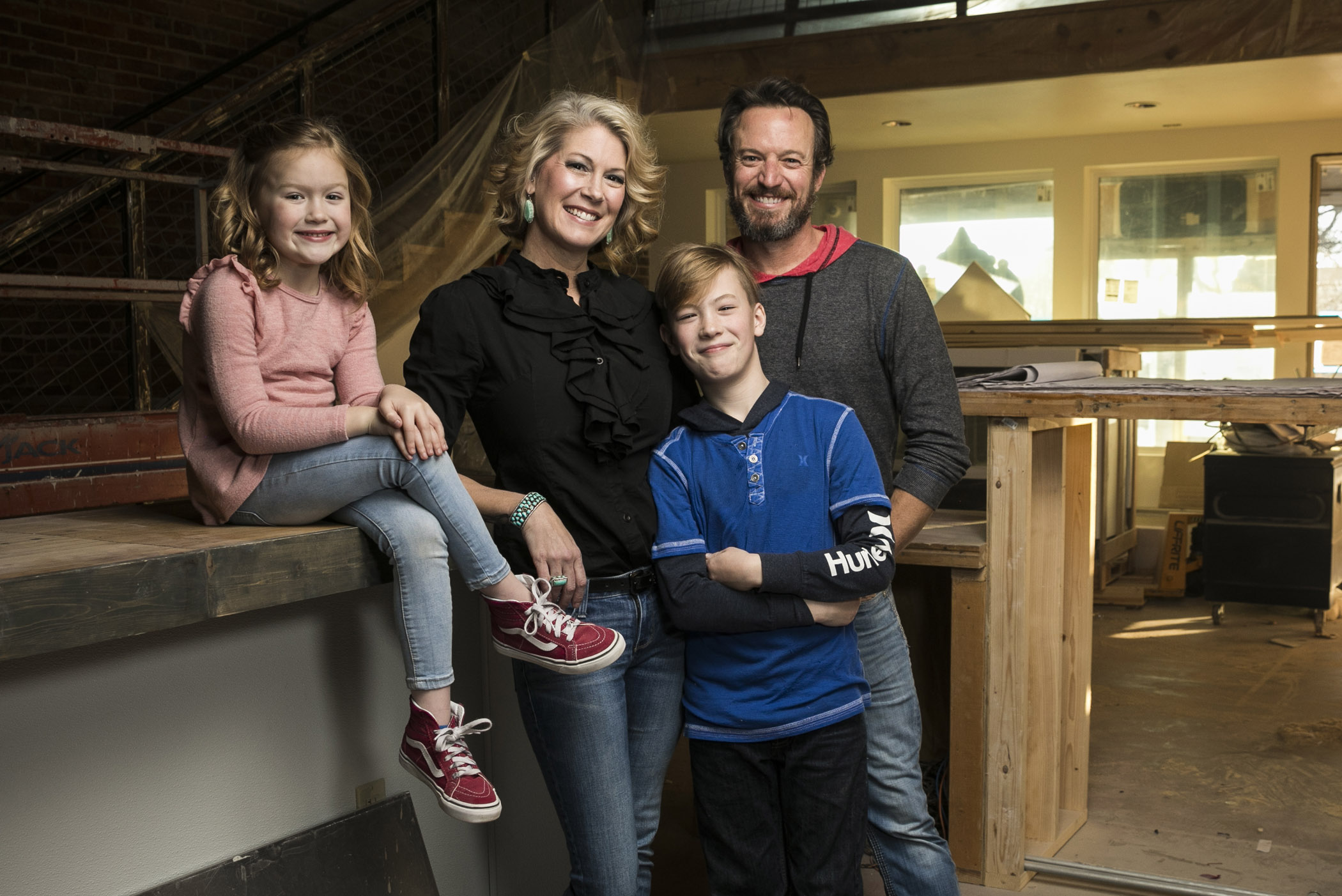 Amy Hawkins, owner of Royal's Bagels in Denton is pictured with her family (from L) Holiday, Royal and husband Joey Hawkins. Photographed inside Jupiter House Coffee on 17 Jan 2019. (Photo by Marcus Junius Laws)

It’s not warm inside Jupiter House, the Denton coffee shop that’s been a mainstay on the Square for over a decade. The concrete floor is stacked with packing crates; a string of yellow construction lights swings above where the drop ceiling used to be.

Amy Hawkins, who co-owns the place with her husband, Joey, points out the brand-new steel beams reinforcing the brick wall where a year ago, on the day after Christmas, a fire tried to lick its way through.

“It did penetrate,” she reveals. “There’s two spots in this wall that it actually made it through the four layers of brick. So we were so close, so close.”

The fire destroyed the Downtown Mini Mall next door, and smoke and water damage, followed by the discovery of asbestos, forced Jupiter House to close—but Hawkins says it was a “bittersweet” opportunity to transform the space. Among other changes, they’ve added a full kitchen so they can make food (including Joey’s famous cinnamon rolls) in-house. Like most remodeling projects, this one’s behind schedule, but Hawkins estimates they’ll open in this month. She glows when she looks around the new-old space.

“I can’t wait till it smells in here, like the cinnamon roll smell, the coffee smell,” she says. “It’ll smell like life, like it’s alive again. And for us it was life. I would say, ‘People are out there saving the world and we’re making coffee,’ and then some people at our church are like, ‘You’re doing what you’re supposed to do. Just be yourself and love on all your employees and show them what you think a good person is supposed to be.’ And so that’s what we tried to do.”

Seemingly born to be a boss, Hawkins abandoned college to work with Joey at a Cinnamonster store and never went back. The couple are serial businessowners, adding Jupiter House to their portfolio 11 years ago. Since then, loyal customers have seen Hawkins through two pregnancies and two remodels (the first one just four months before the fire).

“This whole past year has been fly-by-the-seat-of-your-pants every single day,” she admits, adding that she’s itching to reclaim a routine when the restaurant finally reopens. “Every day will feel like Groundhog Day—which sounds amazing. After this past year I’m like, ‘I want boring!’”

WHAT WERE YOU DOING WHEN THE FIRE BROKE OUT?

We got the call at 5:15 in the morning. My manager lived one block off the square, and she called us and she said, “I think Jupiter House is on fire. I’m not sure. I see a huge fire.” And the crazy thing is, we had been so busy, we really put it on our calendar for Dec. 26 to stay in our pajamas and watch movies with our kids.

WAS THERE A POINT WHERE YOU CONSIDERED NOT REOPENING?

No, because this is our bread and butter. We love Jupiter House. And we did it for 11 years, you know? I got very depressed after the fire, very depressed. I lost 20 pounds. I was just so … I was sad, just sad that something was taken from me. Jupiter House was my thing. And I’ve always worked; I don’t want to be a stay-at-home mom. So I felt like part of my identity was taken from me. I didn’t know what to do. And then you can’t do anything, you know?

HOW DID YOU DIG OUT OF IT?

Well my kids, obviously, were a huge part, and then when we started really thinking about what we could do with this place I started getting really excited. You just have to get to a point where you’re like, “Look at this as an opportunity. Let’s get past the sadness.”

WHEN YOU FIRST BOUGHT THIS PLACE, IT WAS JUST THE TWO OF YOU. WERE YOU IMAGINING BRINGING KIDS INTO THIS PICTURE?

Definitely, yeah. What was so cool is, after Royal was born, I went back to work five days later and I would just bring him with me. And I knew so many customers so well, I could say, “Could you hold him for like 20 minutes so I can go do … ?” So he was for sure raised in this coffee shop. He thinks everybody’s his friend, you know? He’s not intimidated to talk to people at all. So I think that made Royal very social.

DID HOLIDAY HAVE THAT SAME EXPERIENCE?

She didn’t. We were opening Royal’s Bagels the week she was born. I had her at 3am. You can leave three hours after you have them. So at 6am [Joey] drove me home, dropped me and her off, and went and opened the bagel shop. Then he came back home, showered, put a suit on and went to the Mayor’s Breakfast, because he was on city council.

So hers was a little different. As soon as I could get her in [preschool], I got her in there so that I could come work for about three hours then I could go get her. You know, with one, it’s so much easier.

A LOT OF PEOPLE GET INTO THE RESTAURANT BUSINESS NOT REALIZING HOW EPHEMERAL THEY ARE—RESTAURANTS CLOSE, FIRES HAPPEN. DOES THAT EVER SCARE YOU, HAVING A FAMILY TO SUPPORT, OR DOES THAT EXCITE YOU?

Well, I think it’s all we’ve known. We’ve just always been our own boss. We love being in charge of our own schedule. But yeah, it’s really hard at times. It’s really hard when you have some slow months, trying to figure out how you’re going to pay rent. But then sometimes it’s so great. And it’s way more great than not.

WHAT DO YOU HOPE THAT YOUR KIDS ARE LEARNING FROM BEING AROUND THE BUSINESS?

I just really want them to see that people aren’t just a number, and even though you know their first name doesn’t mean you know anything about them. And so I just want them to show people compassion. We get people from all walks of life: homeless, college kids, the Denton hippie, businessmen in suits, United Way will meet here. I think this was just a really good melting pot for the community to get to see we all can coexist, and I think my kids are definitely learning that.