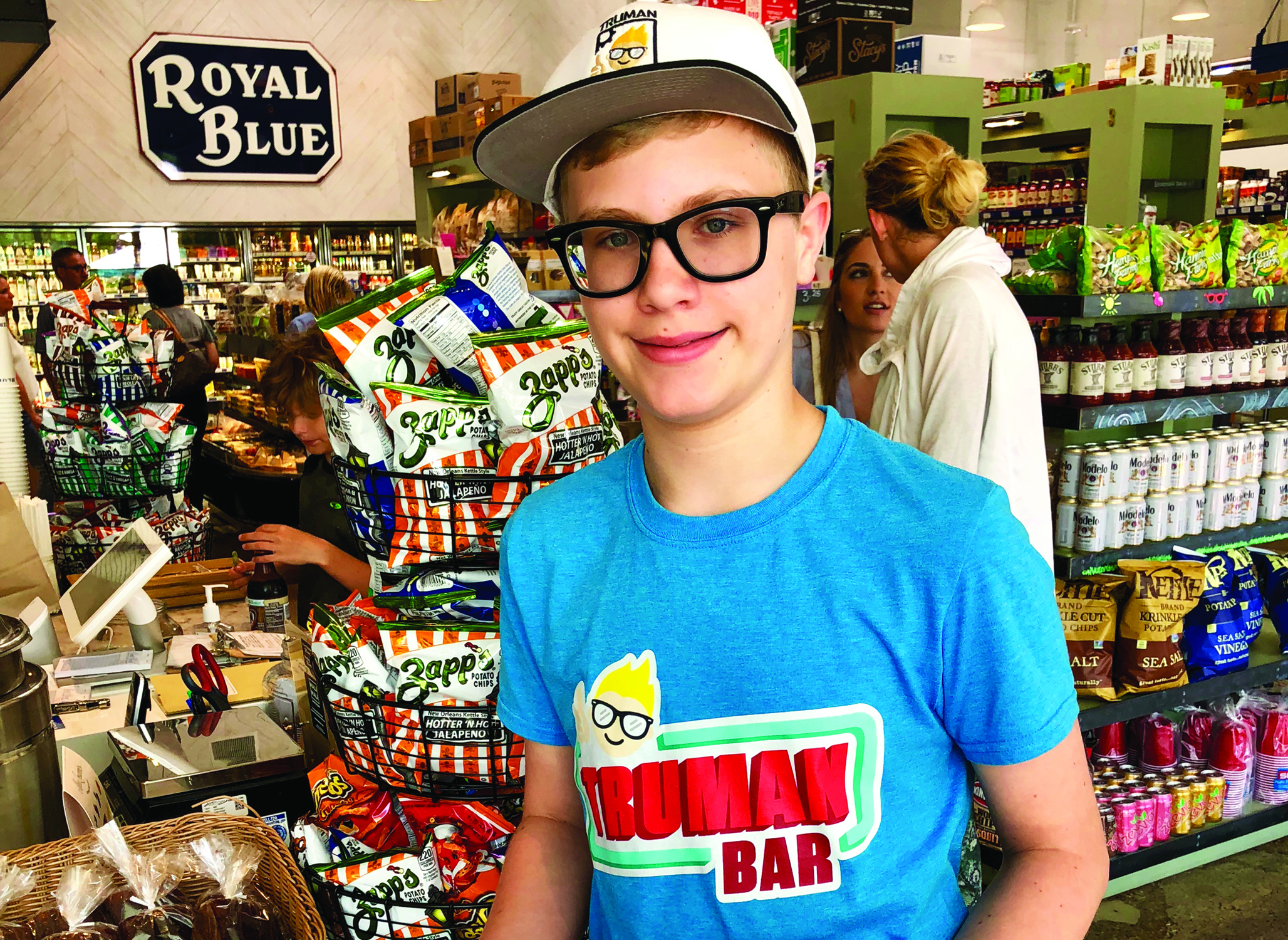 Step aside Charlie—there’s a new chocolatier in town. Walk into several stores in Dallas and you may come across a bright red–wrapped chocolate bar stamped with the words “Truman Bar” and a blond boy giving a thumbs up. That is the face—in cartoon form—of Truman Wilson, the 14-year-old founder of The Truman Factory.

We met Truman and his dad, Derek Wilson, at Royal Blue Grocery in Highland Park Village. (Yep, Truman Bars are sold here.) Selling Truman Bars along with merchandise such as T-shirts, magnets and stickers adorned with its trademark logo, The Truman Factory is all the rage among Dallas kids. Truman Bars are popular for their Willy Wonka-like allure: Each wrapper has a ticket with a code you can enter online to redeem a special prize. And staying true to its motto of “For Kids, By Kids,” The Truman Factory donates a portion of its sales to Vogel Alcove, a Dallas-based organization that helps homeless kids. We chatted with the Wilsons after school to talk all things Truman Factory and the importance of giving back to the community.

Where did the inspiration for Truman Factory come from?

Truman Wilson: I was 11 years old when we were all watching Shark Tank as a family––we watch that often together. There were a few kids on one of the episodes; I thought if they could do it that young, I probably could, too. I had planned on starting a company after college, but I didn’t realize kids could start their own companies. So, I asked my dad if I could start one. I wanted to choose a product pretty much everyone loves––almost everyone loves chocolate.

Help A Kid Out

Truman Bars are stocked at 50 Dallas-Fort Worth locations. Visit the website for a store near you. Also, The Truman Factory provides chocolate bars for events such as parties and charities, with options for customizable prizes. Email epic@thetrumanfactory.com for details.

How did the idea for the ticket inside each chocolate bar spark?

TW: We wanted to bring a fun experience to kids. We thought if we were to include a prize, that would be a pretty cool idea. … There’s hundreds of prizes you could win, from gaming consoles, Nintendo Switch, movie tickets or tickets to a Mavs game. Underneath the wrapper, there’s a code and you can go to our website, put in that code and see if you won a prize.

Derek Wilson: There’s a back-end software and each batch of bars has a unique code––they’ll have different numbers on them. So this back-end system, we basically dump the codes in and then it randomly matches them up [with prizes]. It’s a totally random experience.

What was the process of creating a business from scratch like?

TW: First, we wanted to get an idea of the actual product. We thought we should do chocolate with a container, a little figure or something. We figured that would be kind of expensive and then we thought of the codes. You would put it on the website and it will tell you if you won a prize.

I’m sure that’s something kids have really liked.

DW: Yeah. We found a candy manufacturer in New York that is able to make chocolate Truman  … as well as imprint the codes and tickets on the back of the wrapper.

Have you faced any challenges in starting your business?

TW: Yes. Whenever we first started, we figured it was going to be really hard to ship chocolate and it would get very expensive. We became a Dallas Fort-Worth-only kind of candy bar.

DW: The next thing for us is to figure out how to sell online. We have to figure out what our packaging is and all that. We’re growing so fast just locally that we don’t really have to sell out-of-state right now, or out-of-city.

There are so many organizations to give back to in the community. Why did you choose Vogel Alcove?

TW: I wanted to pick a charity that helps children. My dad and I looked around at different kids’ charities and when we visited Vogel Alcove, I knew this was the charity I wanted The Truman Factory to support. I want to have The Truman Factory be “for kids by kids” and at the same time to have kids helping kids.

As a young businessman, why is donating a portion of your sales to Vogel Alcove important to you? How have the kids you’ve helped responded?

TW: I feel very lucky to have what we have and I want to give back to my community––I don’t want people to think I am selfish. I want to help kids. The Truman Factory is a good way to make it so kids help kids. Kids buy Truman Bars and then some of that money helps other kids. I was very honored last fall to receive the Kids Helping Kids award from Vogel Alcove at their annual gala for my efforts. These kids are really young so when I go there they just hug me a lot.

And as a dad, what advice do you have for other parents to foster entrepreneurial spirits in their kids?

DW: I think it’s a really fun time to be a kid because you’re exposed to entrepreneurs from a very young age, with shows like Shark Tank. These kids are already very exposed to the idea of being an entrepreneur and having a business; this comes from Shark Tank as well as YouTube influencers and apps that they know about to trade and buy, sell. Mowing lawns and lemonade stands are a bygone era. It’s very easy today to use online resources to create great-looking marketing materials and products that they can try and sell in school or around small local stores.

Where do you hope to see the Truman Factory in the next 5 years? 10 years?

TW: The great thing about having a brand called “Factory” is that we can make it whatever we want. We have discussed having a physical location, doing other Truman Bar flavors, combining hard candy with prizes and fashion, clothing. I have a group of kid advisors called Epic Team and we meet and discuss ideas.