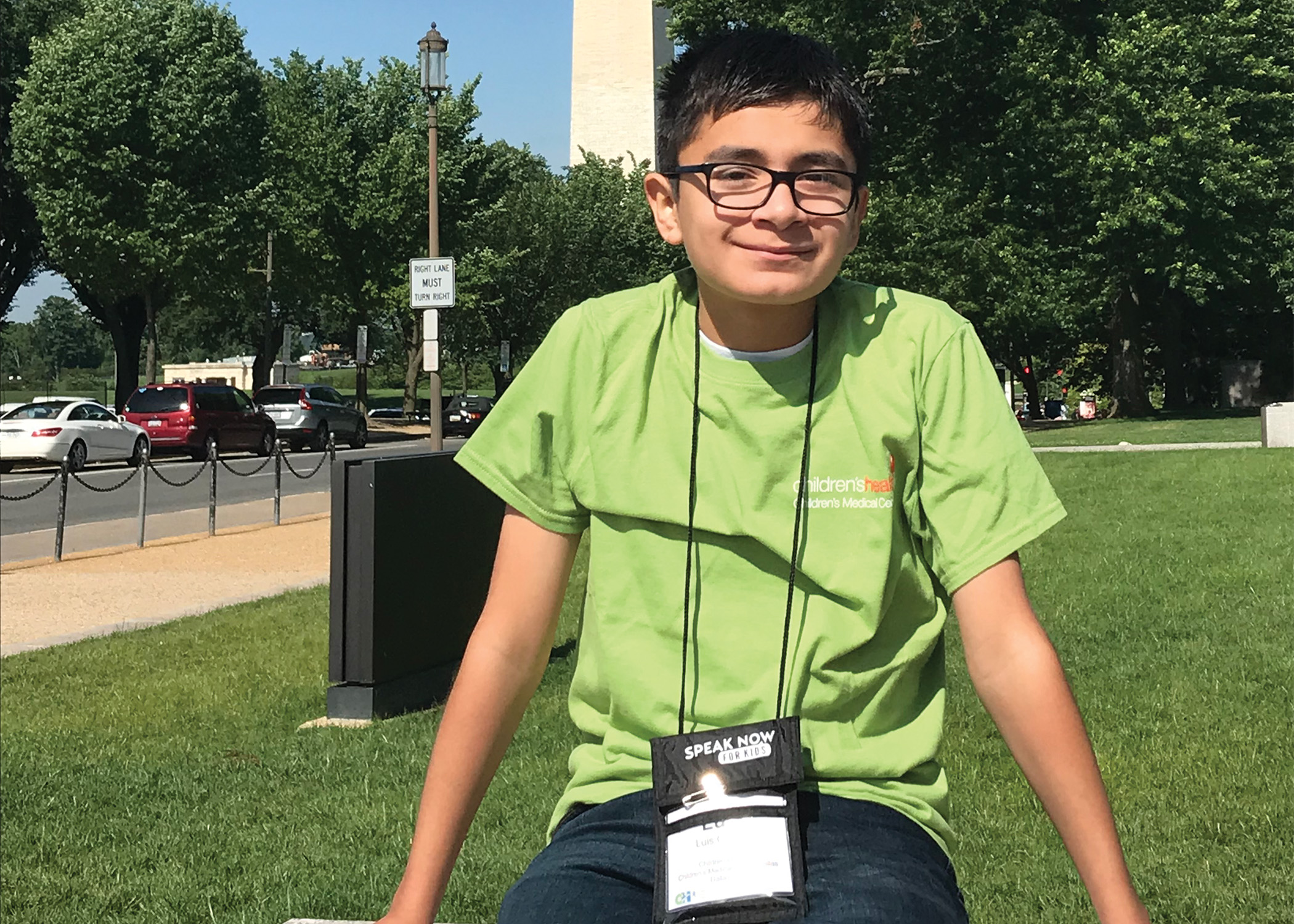 Cancer survivor, activist, author—an impressive resume for a 12-year-old. Luis Collazo was diagnosed with retinoblastoma (cancer of the retina) at just 6 months old. Today, he lives with a prosthetic eye and advocates for those with differences like himself. At 7 years old, he wrote a book about a boy who experiences bullying, Todd the Odd Boy, and recently traveled to Washington, D.C. on behalf of Children’s Health to lobby for Medicaid coverage for every child who needs it. While in the capital, Collazo met with the likes of Congressmen Pete Sessions, Marc Veasey and Joe Barton. We sat down with Collazo and his mom, Crissty Martinez, to talk about his trip to D.C., health care and his inspirational journey.

Tell me a little bit about your story, Luis. How did you get started with activism?

Luis Collazo: I was just living a nice life and then, cancer came—I was 6 months old. It was metastatic cancer, so they had to hurry up and take it away or else it was going to infect other organs. They immediately took it out, and [now] I have this prosthesis for the rest of my life. Years went by with this eye and kids got pretty brutal. [They] didn’t really understand, so they started teasing and bullying me.

That must have been really tough.

LC: Yeah, especially in 2018. And then, the invitation came to go to Washington D.C. I remember my mom was picking me up from school, and she told me that someone called her [asking] if we were interested in going to Washington to advocate for children. It was pretty awesome.

You can find Collazo’s book on amazon.com and reach out to the congressmen Collazo spoke with to further advocate for health care.

How was your trip to Washington, D.C.? Who did you talk to?

LC: When we were in Washington, the first thing I did was go on a sightseeing tour. We were on a bus and looked at all the amazing things in Washington, such as Capitol Hill and the Washington Monument—what caught my eye were the cherry blossoms from Japan. The next day, I [got] ready to go to Capitol Hill to talk to legislators. I was pretty nervous, but later on, I didn’t get nervous anymore. The point of the trip was to make Medicaid accessible [to everyone] and talk about my story. I realized that the legislators kind of had similar pasts [as mine]. One of the legislators was also bullied— he said that he was bullied in the seventh grade. He told me to ignore those people. I met three congressmen and three of their staff members. It was interesting to share my story with important people who pass laws.

Crissty Martinez: [translated from Spanish] I think they were impacted by his story and began thinking that it’s not just Luis, there are many other kids out there who are going through the same thing. I think they are going to think about it and have that in their conscience. At least the three congressmen he met said they were going to be at the front and center of this issue.

So, you’re an author! What inspired you to write Todd the Odd Boy?

LC: The book is about a kid who gets bullied, kind of like me back in the first grade— that’s when the bullying started. But the story gets a happy ending. They learn to accept him as a friend, aside from his differences. That’s what the book is really all about—just accept people as they are, because [we] are the same.

CM: He loves to read, even as a kid. I think that he just began writing and it was a way for him to [process his feelings]. He wanted the kids to know what he felt when he was being bullied. But at the end of the day, he wanted to create something good from a bad situation.

What next steps do you see taking in the future to advocate for Medicaid?

LC: In the next few years, I hope that Medicaid will be accessible [to everyone]. I really don’t like seeing kids being in the hospital because they can’t walk, have one eye or [need] surgery and then they realize they can’t pay for it and can’t get it. So, they go on in life with being sick. I [want to advocate] even more and [tell legislators] to just make Medicaid accessible. It will not only help the children but also America’s future. I hope I get to be a scientist. By researching a lot of stuff and going to the right college [to] get the right education, learning about diseases and disorders, I can help to prevent disorders. In the future, we can use a new treatment to kill cancer.

How can the greater Dallas community help and get involved with this cause?

LC: They can donate to people who don’t have Medicaid so they can actually go to the hospital. Then, maybe Congress will see that [and may] actually feel sympathetic toward these people. Or donate money to charities [that] support Medicaid.

CM: Perhaps sharing your stories to make those who make the laws aware, like Luis did. [Legislators] become more aware of how health care helps people like us.