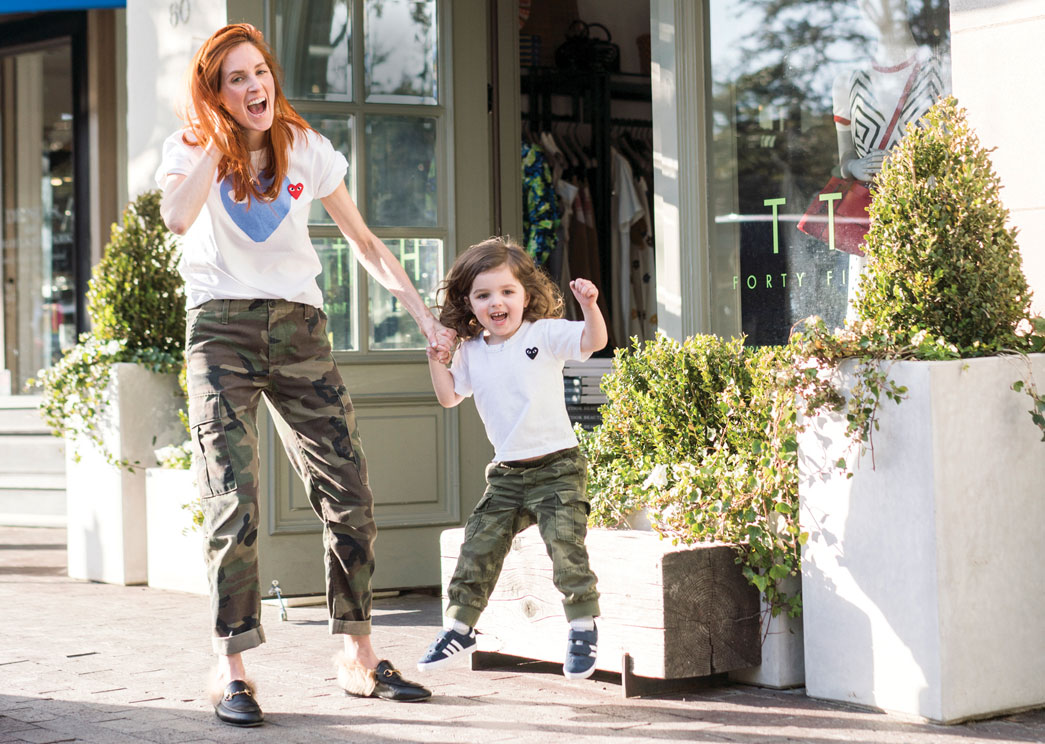 If Taylor Tomasi Hill’s flaming red hair looks familiar, it’s with good reason—fashion editors have been splashing her no-holds-barred signature style across their magazines and blogs for years.

One of the original street style stars and a former fashion editor herself, the Dallas native was an industry name to know long before she took the helm of creative and women’s fashion at Forty Five Ten.

“I found my true passion—discovering untapped, emerging talent—when I worked at Teen Vogue,” she says. “I was the first editor that would walk trade shows to find the needle in the haystack.”

Perhaps fated to work in the industry, Tomasi Hill grew up helping her parents write orders and unpack samples for their children’s accessories line. After graduating from Pratt Institute with an industrial design degree, she scored an internship at W Magazine, and her love affair with fashion hit a fever pitch.

After departing Teen Vogue, Tomasi Hill, 38, spent time in New York at Marie Claire and Moda Operandi, where she transitioned from editorial to the business side of the industry.

Feeling burned out, she launched TTH Blooms, a floral design company, in 2013. But when Forty Five Ten came calling, she knew it was time to return to her roots.

In 2016, Tomasi Hill moved back to Dallas with her husband of 10 years, Chase, and their son, Wells, now 3. She was named vice president, creative and women’s fashion director of Forty Five Ten and got back to doing what she does best: finding the next big thing.

I’m so glad the stars aligned and we were able to get together! Your schedule is crazy.

I haven’t mastered work-life balance, for sure. A lot of people seem like they have, but I’ll be the first to tell you I don’t have it figured out.

Does that give you guilt?

I was raised watching both my parents work late hours. At the time, it may have felt lonely. But looking back I realize that’s what shaped my work ethic. I want Wells to see his mom as a hardworking person, who really does contribute to the family.

Since having Wells, has your travel slowed down at all?

At the moment, not so much. Am I working on that? One-hundred percent. It’s not worth it to miss certain moments. I miss his birthday every year because I have to go to fashion week. That’s a tough one.

What advise would you offer to other working moms?

We all have to be a little easier on ourselves. I hold myself to a high standard, and I’m a perfectionist. But we need to give ourselves credit for everything we juggle.

Do you have a philosophy on parenting?

We all lead by example. When I was growing up, my father would go out to his old ’79 Porsche, put on his driving gloves, heat up the car and take me to school. And every single morning he’d tell me, “Be nice to everyone. Everyone is here for a reason. Be a leader and choose your own path.” I preach that to my son.

How do you take time for yourself?

I wish I were better at that …

Ok, do you take time for yourself?

I just started going to [facialist] Joanna Czech. The two times I’ve gone I’ve fallen asleep on the table. I’ve been pretty routine about my Bikram yoga practice. I’ve been doing it for 20 years on and off. It’s the only thing that holds my attention.

What is your ethos when it comes to wellness? Do you have one?

When I travel, I allow myself to eat whatever I want. I had french fries almost every night in Paris. But I’m pretty good about what I eat at home. Lots of ginger shots.

What are your go-to restaurants in Dallas?

When I get off the plane from Paris, my husband and Wells pick me up and we head directly to Mesero to get the salsa in the veins. I also love the Honor Bar and Flower Child.

Let’s talk about fashion. What inspires you?

It’s not just about picking what I think is cool; it’s about making sure we’re catering to women and their bodies—not what color is in or what style of jean is of the moment. Having a one-on-one with a woman and her leaving feeling thrilled and confident is what inspires me.

And your own style?

I like to try everything in new and different ways. I often look back and see that 75 percent of what I wore was awful, but it’s fun to just play with fashion.

Do you have a style icon?

I try not to have too many references. I want to be genuine. The magic happens when you’re not trying to replicate something. We can help assist you in what works
for your body, but it’s not about copying.

Did having Wells change how you get dressed in the morning?

Maybe a little bit because my hips grew. They did not go back—nope, that’s a lie. My right foot also grew so some of my shoes hurt. I often wear the same thing two days in a row—and I fully own it. I don’t know why you wouldn’t. You can’t plan your life with a child. It worked yesterday so let’s just throw it on again.

Exactly! And I am not afraid to admit it.

What’s your approach to dressing Wells?

I was adamant about hand-medowns and still am. But the website Maisonette completely changed—not changed, tweaked—my hand-me-down philosophy. It’s very well edited. I get caught in a bit of a black hole when I’m on their site late at night.

When was the last time you felt like you nailed it professionally?

I don’t know about nailed it, but I’m very excited about the fact that we’re working with Kirsty Hume, an incredible model from the ’90s. She’s a mom and embraces being natural. She can speak volumes to our customer. I’m thrilled that we got her. That was a real win.

Getting through every day—at the end of the day, when I get to have a glass of wine. Or if I can get through half of my emails, that’s a major win.

Editor’s Note: As this issue went to press, it was announced that Taylor Tomasi Hill and Forty Five Ten had parted ways. We can’t wait to see what she does (and wears) next.

For more with Taylor Tomasi Hill, check out her beauty and fashion favorites in Dallas.