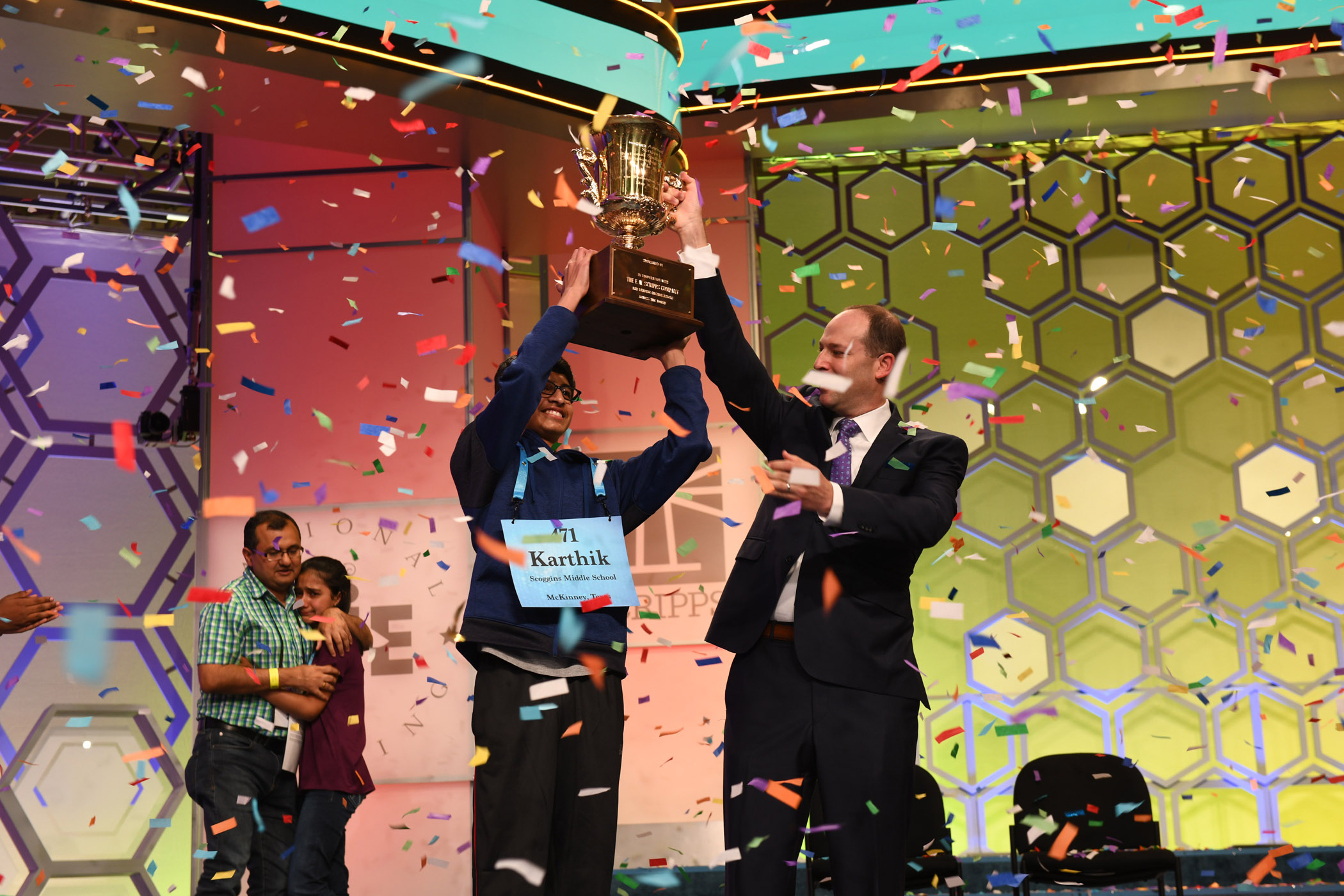 We’re just guessing here, but there are probably few teenagers who can say they’ve learned about 100,000 new words; however, 15-year-old McKinney resident Karthik Nemmani has. His passion for words traces back to his toddler years, so it comes as no surprise that he’s been competing in spelling bees since the age of 7. Nemmani and his family moved to McKinney about two years ago from Illinois just so he would be able to enter into the Scripps National Spelling Bee, hosted in National Harbor, Maryland. (Schools, organizations and universities often sponsor kids to attend the Bee, which can be up to $5,000, including travel costs for the speller and one parent, a sponsorship fee, and costs affiliated with local competitions).

Nemmani’s hard work and move across state lines paid off because the then 14 year old who attended Scoggins Middle School in Frisco, actually won the Scripps National Spelling Bee in 2018. His winning word was “koinonia,” which defined by Merriam-Webster is an “intimate spiritual communion.” We chatted with Nemmani on what it takes to win the Bee and the sacrifices he had to make to do so, standing as a true example that hard work and determination pays off.

How did you get involved with the spelling bee? Did your parents participate in it, or a sibling?
Karthik Nemmani: I have a sibling, but he’s a younger sibling. The main reason we moved was because my parents thought I had potential to do something great in this competition, so they decided why let that go to waste. We repeatedly ask the school in Illinois to enroll in the spelling bee, but they would never listen; they would never enroll us, so we decided to move here.

A Bit About The Bee

Since 1925, the National Spelling Bee has provided kids (up to age 15 or 8th grade) the opportunity to compete against their peers for the grand prize. This year, the champion will win: a $50,000 cash prize (the largest amount in the Bee’s history); a newly designed Scripps Cup (trophy); a $2,500 cash prize from Merriam-Webster; $400 worth of reference works by Encyclopedia Britannica; a trip to New York City for an appearance on “LIVE With Kelly;” and a trip to Los Angeles to appear on “Jimmy Kimmel Live!”

This year’s National Spelling Bee takes place from Sunday, May 26 to Friday, May 31. Watch the Bee live beginning Tuesday, May 28 on ESPN at 9:45am ET.

Have you always had a passion for words and spelling? How did that spark?
KN: When I was 2, I would build words using building blocks. That’s basically where my interest in words developed. Ever since I was 7 years old, I’ve been competing in different spelling bees, and so I slowly gained a lot of interest into it.

What do you enjoy about learning new words and how to spell them?
KN: Learning those words exposes you to a wide variety of knowledge. You can learn about different cultures, different foods, even different places, too.

And how was the process like training for the spelling bee? How long did you practice? Did you have a tutor?
KN: When I was in 8th grade, I had a coach. She really helped a lot. She put all her time and effort in trying to help me develop as a speller. Without her, I definitely would not have been able to win the Bee. Normally I would work for 2–3 hours on weekdays and maybe 5-6 hours on weekends. But the last two months [prior to the competition], I had to kick it into full gear. I studied for 4 hours on weekdays and maybe 8 hours on weekends.

What advice would you give parents that are interested in getting their children involved in spelling bees?
KN: First things first, they have to see if the kid has interest in the Bee. If the kid doesn’t have interest, then there’s no point in doing it. You should put your time into something else, whether it be like a sport, or an instrument or something. And then if they do have interest, they have to work hard every day and put all their effort and make sacrifices. They should try to see if they like words, and then they should try to expose themselves to as many words as possible and be on the lookout for words in the world.

How do you expose yourself to new words?
KN: If you go to a restaurant and you see interesting food, then you could probably note it down. Or if you go to someplace and there’s a specific thing that it unique to that place, then you can note that down. You just got to expose yourself to as many words as possible,  and then you need to actually start studying, competing and getting the competition exposure.

How do you keep track of all your words? Do you have a notebook or a Word doc?
KN: Actually I am able to learn words by typing them up. I would type up some words, and then my dad created some program, and I would review using that.

I’m sure winning the Bee has had a great impact on you––it’s something you’ve worked so hard for. Can you talk a little bit about how that felt and being recognized?
KN: At the beginning of the competition, I just wanted to do the best that I could. I knew that I worked really hard. And then I knew that the results will follow. I just kept my calm [and] thought about my own work. And I didn’t think of the result—is this person going to get out, or am I going to get out? I just stayed in the moment and spelled each word.

What do you hope to do when you grow up and go off to college?
KN: I’m not going to do something that directly relates to spelling. I enjoy linguistics, but I mostly am aspiring to be a businessman when I grow up. The words that I’ve accumulated throughout the spelling bee can definitely help with speeches or something.